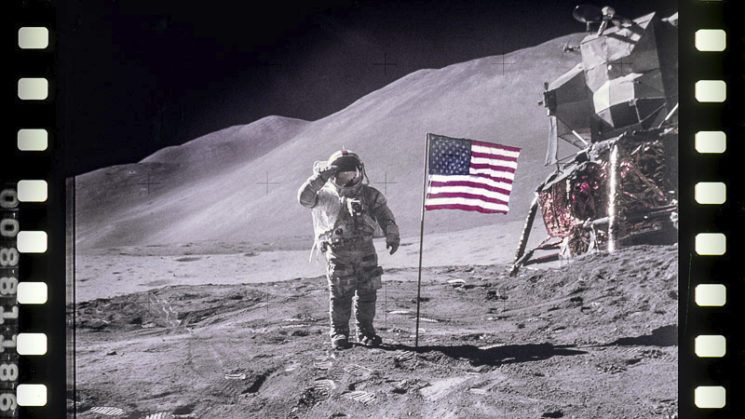 I recently had the amazing opportunity to work with some very interesting historical media. A retired NASA engineer friend contacted me having found a box of photographic films in his desk drawer. Turns out the box contained two partial rolls and several cut slides of 70mm film from the 1971 Apollo 15 mission! What a find!

According to my engineer friend, these are not unpublished images. They are, however original films from the customized Hasselblad EDC (Electronic Data Cameras) medium format cameras used on the lunar surface, and include numerous images of the astronauts, the Lunar Module — the “Falcon” (LM-10), and Lunar Rover (LRV).

There are also multiple images from orbit featuring the Command Module – Endeavor (CM-112). As a photographer, I found it interesting that there is one image showing the camera mounted on a bracket on the chest of the astronaut’s space suit. The cameras were essentially point and shoot – whichever direction the astronaut was pointed, it shot. 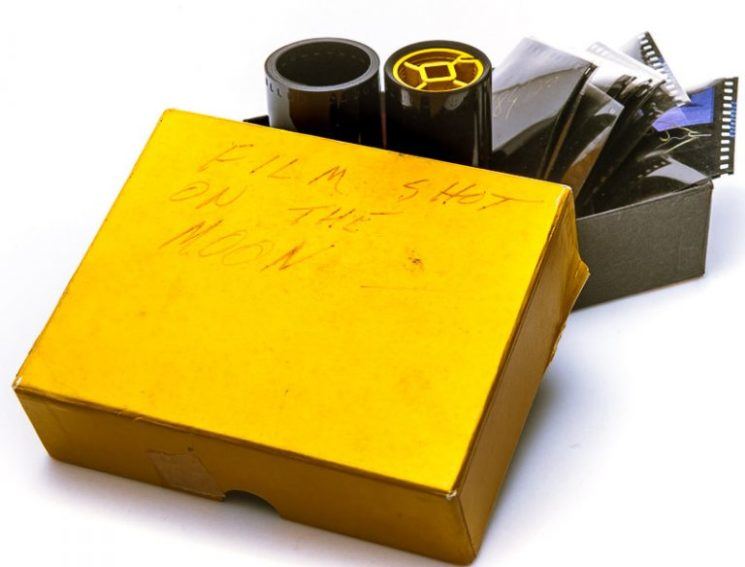 The actual composition of the film remains something of a mystery, but was reportedly a custom Ektachrome formulation that Kodak developed for the NASA missions. The 70mm sprocketed film was thinner than typical film – allowing for more frames per roll. (Imagine trying to change film in a space suit). The team took multiple cameras to the moon, but brought back only the expended film magazines. The actual camera bodies were left behind to conserve weight on the return voyage.

There were a few challenges in photographing the film. The film was in pretty good shape for having been stored in a box in a desk drawer for 40+ years. It has a heavy blue-ish color cast. I’m not certain if that’s a function of age, or something unique to the particular film stock. So it required some significant color correction in post. 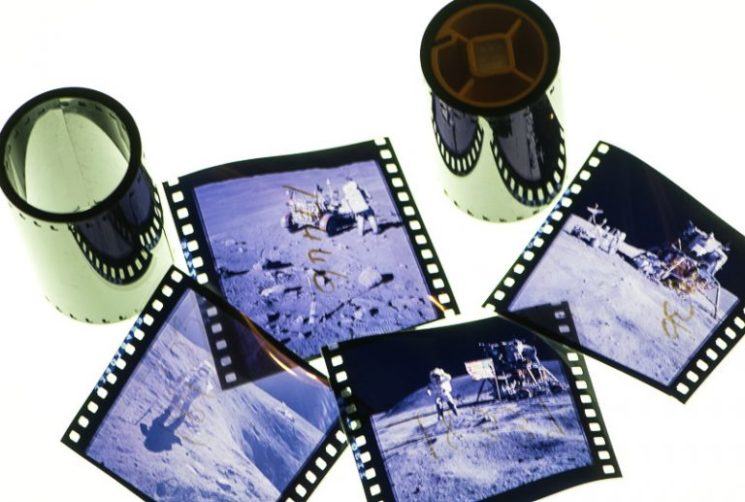 I digitized the film with a Nikon D810 DSLR / 105 macro lens combo and an LED light panel. I considered scanning, but the scanner’s 60mm medium format negative carrier would not accommodate the slightly wider 70mm film. However, with a little trial and error, and the help of my son’s 3D printer, I was able to create a film holder to fit the NASA film that enabled me to capture the entire width / frame numbers, film stock info, etc. This worked great for most of the film, but was not usable with the cut frames since there was no glass to keep them flat. For those remaining images, I purchased a piece of anti-newton glass, and was able to sandwich them between the glass and the LED panel. 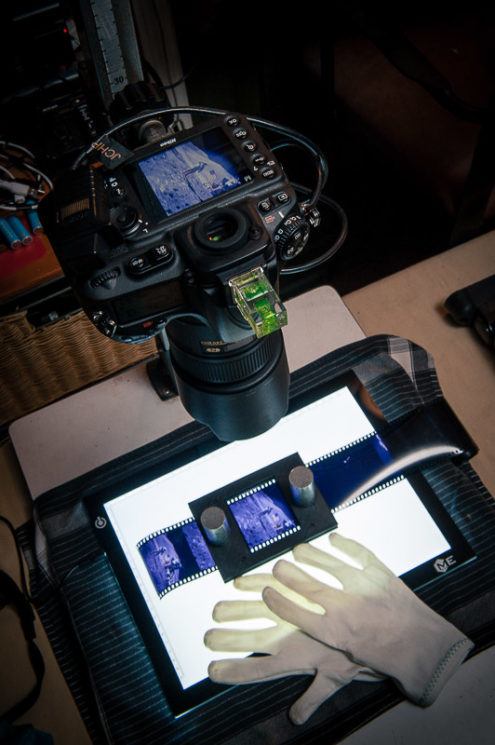 How these treasures ended up in my friend’s desk drawer at NASA may never be determined. But the fact that they’ve been to the moon and back makes this film just about the coolest thing I’ve ever had my hands on. 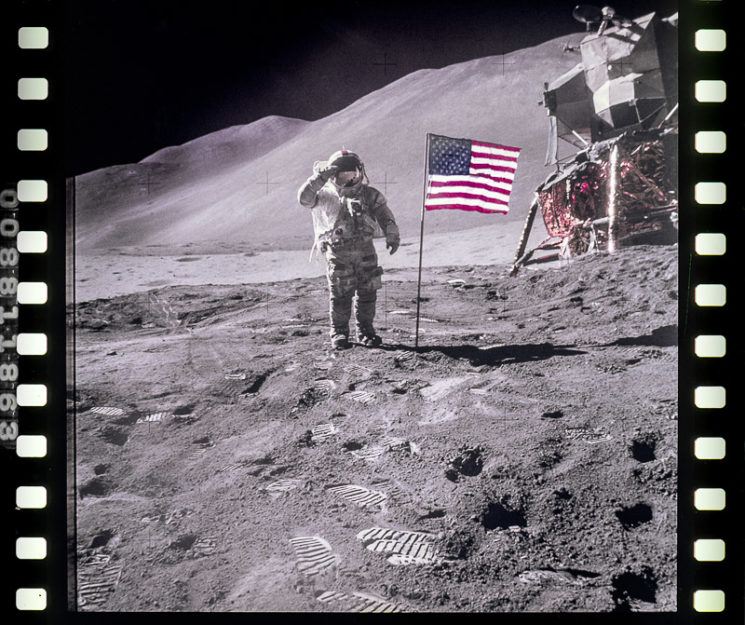 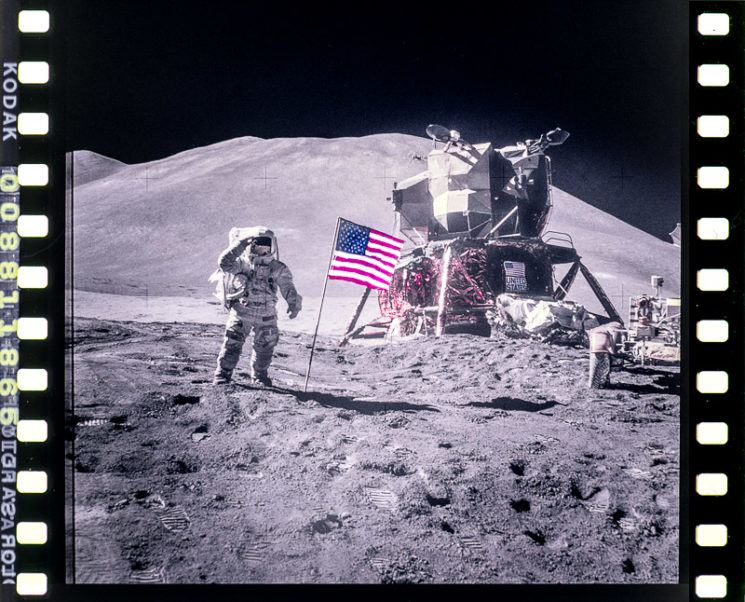 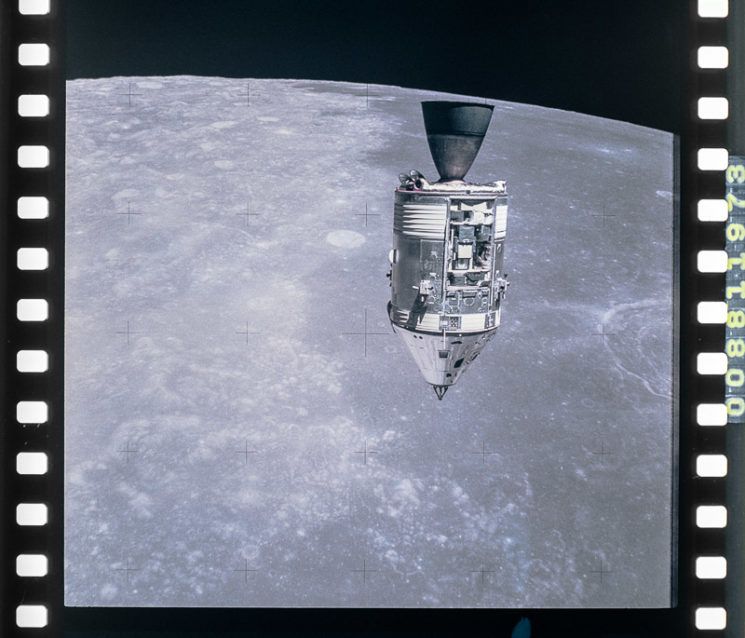 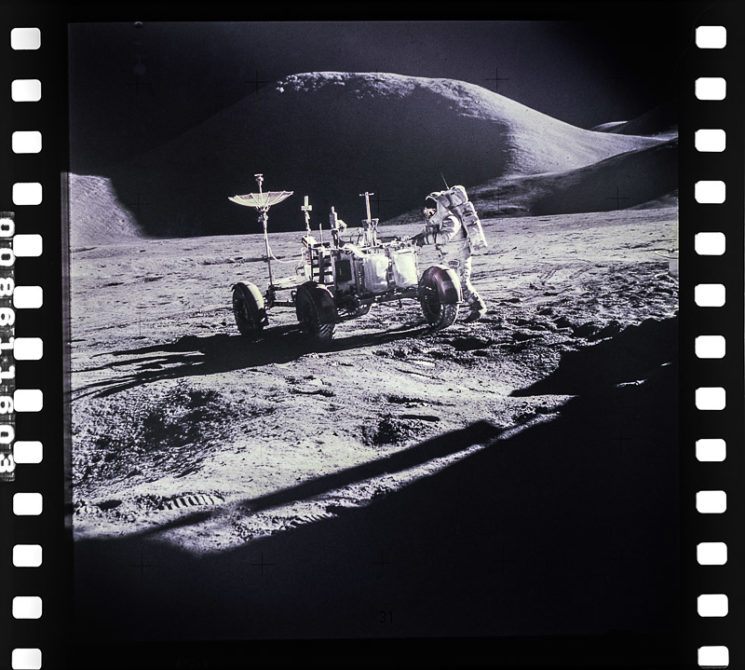 Jon C. Haverstick is professional photographer based in Orange County, California. Having come from a film photography background, he has recently dipped his toes BACK into the waters of analog photography with the acquisition of a pair of medium format film cameras. It’s the venture back into film photography that ultimately led to the NASA Apollo 15 Film.

You can find out more about Jon on his website, follow his work on Facebook, or reach out to him through LinkedIn. This article was also published here and shared with permission.

Zeiss lens used for Apollo moon missions sells for $453K at auction
« 16 things every photographer should be able to do in less than 10 seconds
Rihanna posts photoshopped photos of Queen Elizabeth II, causes backlash from fans »