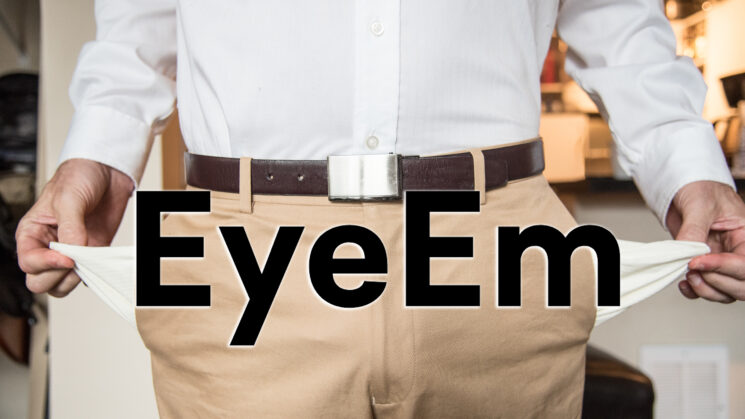 If you sell your photos through EyeEm, you may be experiencing the problem none of us likes to deal with: you’re not being paid. According to a recent report, EyeEm has stopped paying royalties to the photographers who have been selling their photos through this stock website. The reason? EyeEm claims it’s the “company restructuring.” And while a violin starts gently weeping in the background, they also add that the current “global events” have hit the platform as well.

Photo Archive News reached out to EyeEm to try and find out what is going on. They got a response from the stock site’s new owner Talenthouse AG, confirming that there have been delays in payments to some of the creatives. “Even just missing one Creative’s payment is unacceptable,” the statement reads further. The company apologizes, but then proceeds to explain what led to the issue.

“Over the last few months we have navigated listing the business on the SIX Swiss Exchange and acquired several businesses into the group,” the statement reads. “Throughout the quieter summer months we started the process of centralising our accounting and cash management systems and restructuring our newly merged finance teams.”

“This is an arduous process and challenge, yet it will better facilitate timely payments to our global Creatives. In harmonising localised nuances around receiving and sending money, we have had to implement KYC (Know Your Customer) procedures consistently across the group.”

Another reason for delays, according to EyeEm, are the global events that have, undoubtedly, hit the photo industry hard. The Talenthouse claims that they’ve started making manual payments to all photographers with outstanding balances. “With the burgeoning economic climate that is impacting people across the globe, we wholeheartedly recognise that Creatives need to be paid in a timely manner,” the statement reads further.

“When we floated the business, one of the initiatives we embarked upon was a custody account (known as a safeguarding account, in financial terms) for all Creative payments, allowing immediate access to funds earned. Getting that in place is a complicated endeavour given the diversity of local regulatory requirements we have to navigate. We will be raising capital specifically to fund Creative payments in advance for those who need immediate access to their hard-earned money.”

Can it be over for EyeEm?

A serious concern that arises from the current payment issue is that EyeEm could be on the verge of closing. Photojournalist and stock photographer Alexandre Rotenberg mentions some red flags in his blog post about the current state of events at EyeEm. They include overdue payments, of course. But there’s also failing to report sales and the fact that EyeEm was bought by Talenthouse AG who is reportedly also having financial issues.

Honestly, I had no idea that EyeEm has been having a hard time. I closed my account ages ago, after that Samsung scandal that brought me my 15 minutes of internet fame. I wasn’t too active on the site and didn’t make any sales. And even when I did, they resulted in my photo being used for false advertising. If you’re still on EyeEm, let me know – have you experienced payment delays?