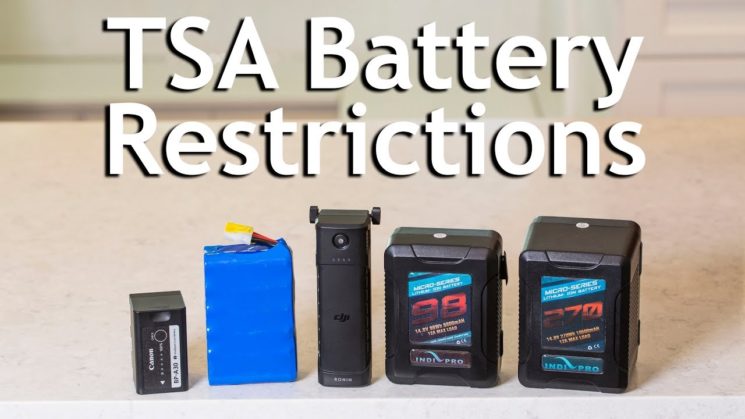 Since the Samsung Galaxy’s exploding battery issue, people have become concerned about flying with Lithium-Ion batteries. TSA has some restrictions when it comes to carrying them on a plane, and it can be confusing and frustrating if you need to travel for a photo shoot. In this video, Jay P. Morgan shares plenty of useful information that will help you prepare your batteries for a flight and arrive happily and safely to your shooting destination.

The thing with Li-ion batteries is that they have two compartments divided by a thin piece of plastic. If this piece of plastic gets breached, the chemical reaction will start in a battery and it will explode. As Jay points out, the chances are higher that you’ll get struck by lightning. Still, a slight chance exists that your battery will explode, so it’s necessary to take some precautionary measures. After all, we even remember a case when a camera battery explosion caused panic at Orlando national airport. So let’s see what you can do to prepare your batteries for a flight, and what you can and can’t carry with you.

You probably have these in your gear bag, and it’s good to know that there are no restrictions when it comes to flying with them. You can carry as many of them as you need, but it would be good to keep them in their original packaging.

These are the batteries that are already in your laptop, camera or lights, as well as your smartphone and tablet. It shouldn’t be a problem to fly with these, and the reason is simple: most of them are under 100 watts. As long as they are in the component, you can transport them as you like, either in the carry-on or in the checked-in luggage.

If you’re carrying spare batteries, you can take as many as you need as long as they are under 100 watts. However, they can’t be transported in the checked-in luggage, but they have to be in your carry-on. The reason is that TSA fears that they might get in contact during a flight and cause an explosion.

Big batteries are all those that are over 100 watts. It’s good to know that you can take these on an airplane too, but there are certain limitations. You can only take two of these big batteries, and each of them mustn’t exceed 160 watts. Also, you can only take them in the carry-on luggage, you can’t check them in.

If you’re carrying a lot of spare batteries, prepare them for the flight. It’s important to protect the contact points because TSA concerns that they might touch and cause an explosion. There are several ways to protect the batteries before you pack them for a flight:

If you’re carrying a lot of batteries and gear, prepare that you’ll be checked at the airport. So, make sure to prepare everything in advance. Protect the contact points, pack the batteries in the right bags and don’t bring more than two big batteries. If you come prepared, it will save you a headache.

Traveling with Lithium Ion Batteries – What Can You Take?