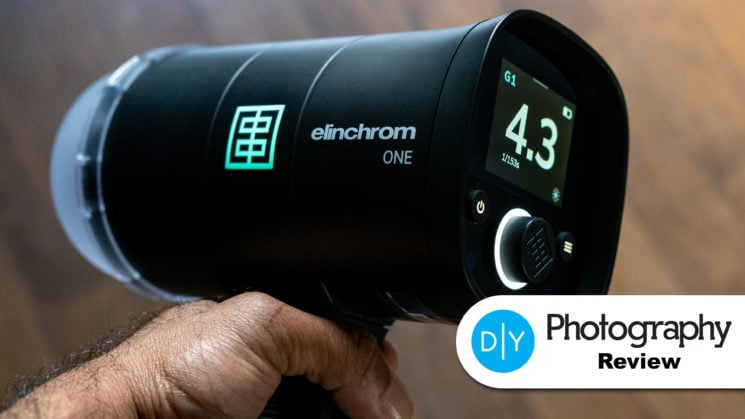 The Elinchrom One TTL HSS is a very cool little light. For a while, the public has been screaming for Elinchrom to bring something compact with no cables. And now they finally did! It’s an OCF Mouth 131 watts small little beast. I’ve had it for a little while now and now it’s time to break apart all the findings and real-world usage.

So let’s start with the technicals so we can get that out of the way. 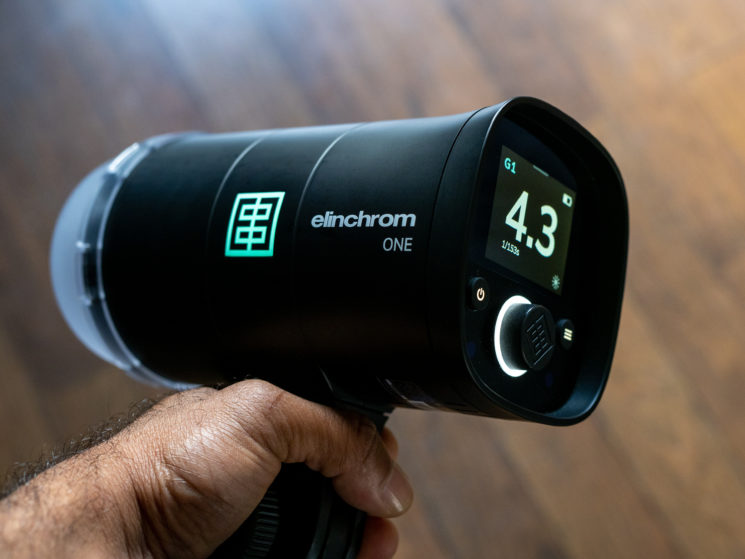 131 watts as it says on the package. If you have other Elinchrom units. Its max power on the Elinchrom power scale is 4.3. So if you want to know how much power that is. Put your old Elinchrom unit on 4.3 and that’s it. Its recycle time at full power is around 1.8secs.

The battery is not removable. When you’re in the field there would be nowhere to charge that extra battery when it runs out. Having a battery built in means you can hot charge via USB-C.

Use any USB-c power bank, add it to the unit and get more power while shooting. This will give you more flashes to go around. Elinchrom also released their own power bank for this purpose. Which you can also use to charge other stuff.

Default new OFC design we see in Profoto and Godox.

This means it’s splash waterproof. It is made when water hits the top or side. It rolls to the bottom of the unit and drips off. It shouldn’t be able to get around any vents or sockets.

After really testing the unit out for a couple of weeks now. There are a couple of things I really like.

Its lightweight portability meant for the last weeks instead of bringing my ELB400 or 500. I would bring the One. It fits nice and snug next to my camera and lenses. Which means I have it with me every day. I don’t have the 400 or 500 with me every day.

This also means I use way more flash than I did. I now also use it in situations where I could just bump the iso or drop the aperture to get more natural light in. Now I just pop out the Elinchrom One and hold it in my hand for a little extra light.

Which brings me to the diffusion dome. It comes with a diffusion dome on top which you can remove. But having that dome is awesome! It softens the light just enough so you don’t really need a modifier. Of course there is a place and time for a modifier. But for a quick portrait session, or just a dap of light here and there. The diffusion dome is more than perfect!

What I love more about this Elinchrom design is that the flashbulb is outside the unit.

Which means it has the full 180-degree usage and spread of light. So it fills a softbox perfectly. Unlike other brands where they put the flashbulb inside the “tubed housing/case”.

On the first charge, I got around 1400 shots. Using variable outputs.

I love the TTL system which works automatically with the pro transmitter.

I don’t even look at my shutter speeds anymore. 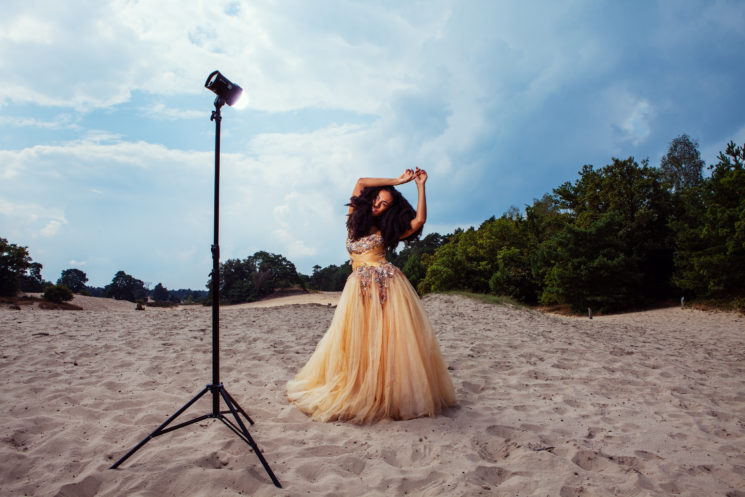 When I start. I just compose my shot.

Add the One. Enable TTL for my first “light metered” shot. It sets the flash power. Then i put it back on manual to micro-adjust and ether add more light or turn it down just a little for the final fine-tune. Which you can also do in TTL. But I like to feel I’m in control.

This way of working comes naturally to me now. Instead of using a light meter I use TTL to meter and micro-adjust from there.

Didn’t think I needed it, But now I can’t live without it.
Bonus brownie points: It was raining and everything was wet and I wanted to change a quick setting on the unit. It reacted to my fingers anyways even tho they were wet. Which is nice.

“Favorite” feature on the Homescreen as well where you can set up your favorite feature to be right there ready to click. For me its turning on the modeling lamp. But you can put other favorites there too.

Bluetooth feature enables to connect to the Elinchrom app and control the lights. Also for connecting on the computer or MAC and to update the firmware. You can also do this via USB.

The only downside for me personally I could find is the power.

At around 131watts (but in real life it felt more like 200 watts). It is enough power to overpower the dutch summer sun. But having the unit on full power the whole time gave me slower recycle times. Nothing you cant handle. And still quicker than a speedlight on full power. But if you are used to the ELB500 and its recycle times. You will notice this. But still perfect for the power it has!

OCF Design. I’ve mentioned it before but for me. I didn’t need an OCF design battery in one kinda unit. Which means it also needs a new adapter to fit normal Elinchrom Rotalux Softboxes. Eventually, there will be adapters for this too on the softbox side. But for now It has a cool rubber OCF to Elinchrom Adapter. But this does mean you can use all OCF Godox or Profoto modifiers on this unit now. Without having to use an adapter.

It’s an all-in-one battery unit. Which means with a bigger softbox and being outside you might want sandbags or an assistant holding the light. Even Tho its lightweight with the softbox its still going to be a little top-heavy.

For me it’s a cool little unit I’ve been bringing with me more to gigs than my bigger flashes.

Not sure I would shoot a whole campaign with it yet. But for those quick in and out portrait sessions. It’s now my go-to. Anywhere where I just need a little bit of light. I call it my speedlight ++. And I can see myself use this as a 4th or 5th light in a bigger lighting setup. Or gelled as an accent light somewhere in the scene. 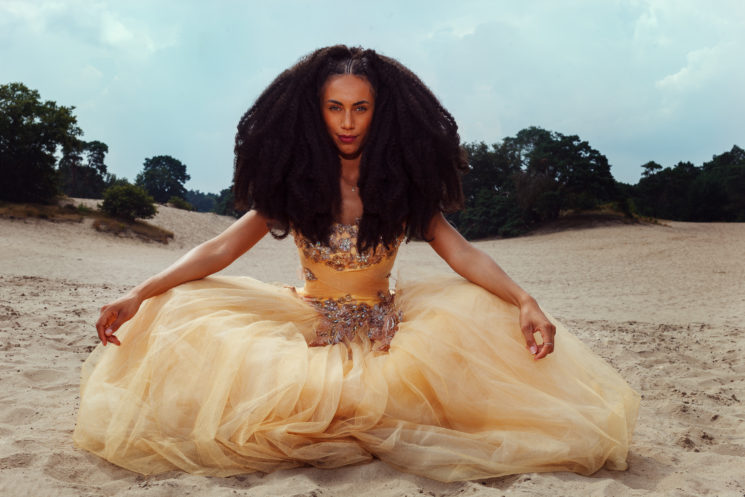 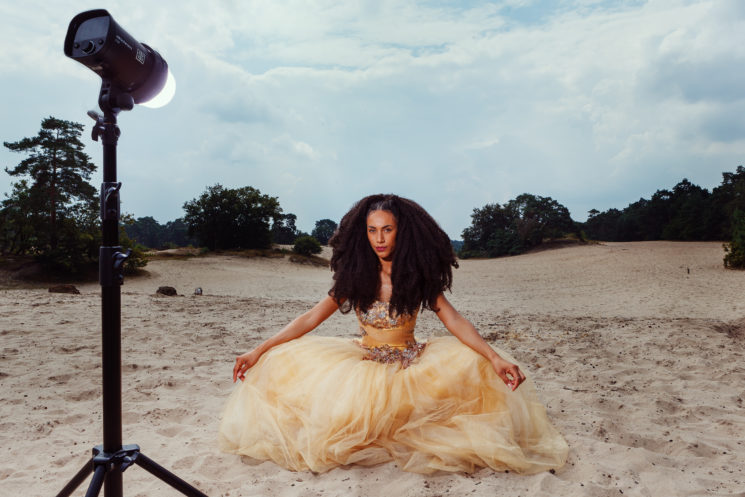 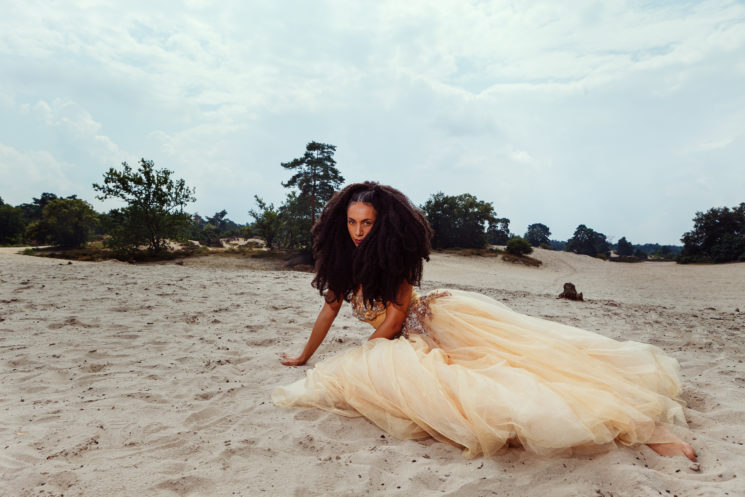 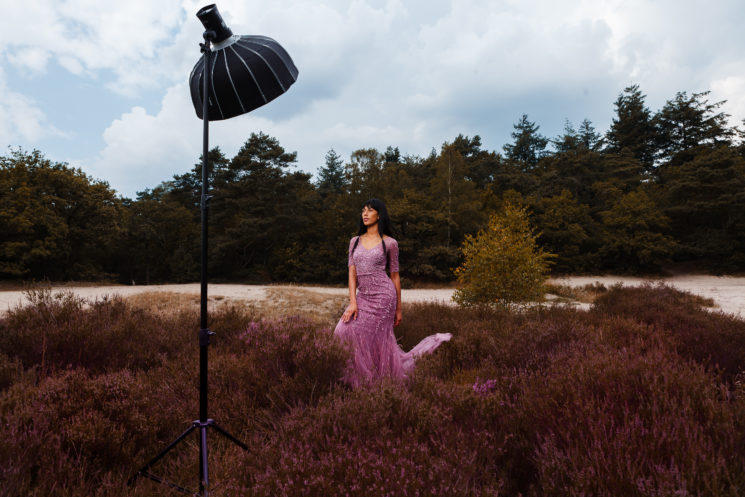 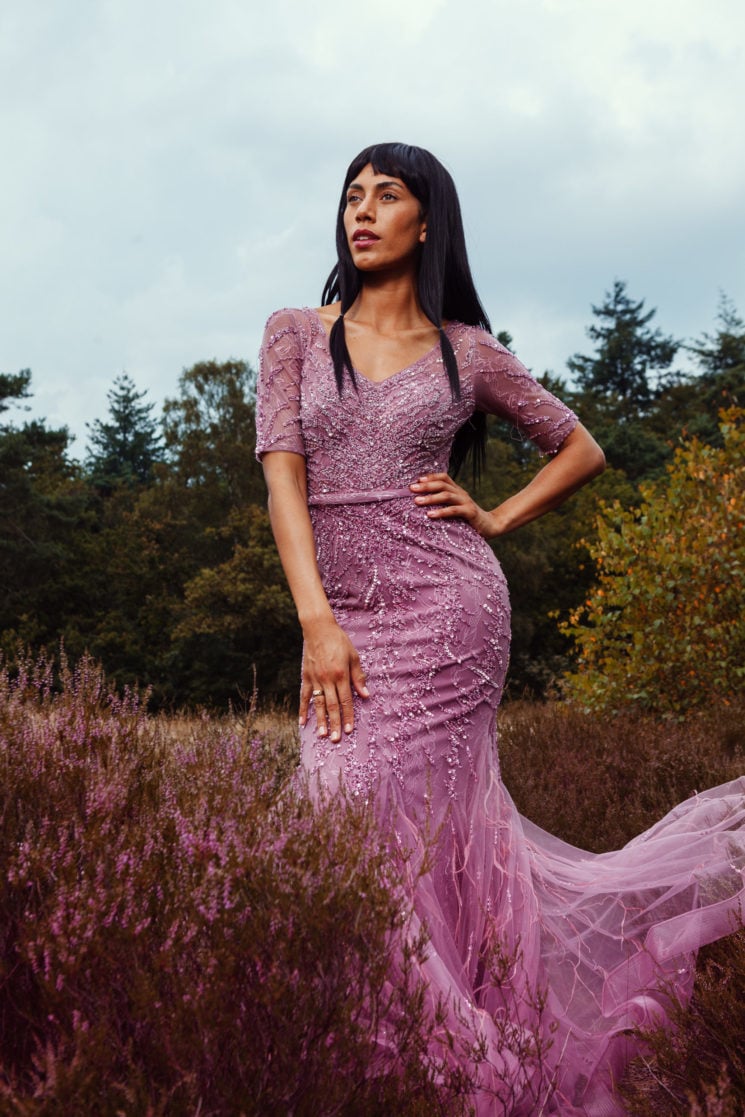 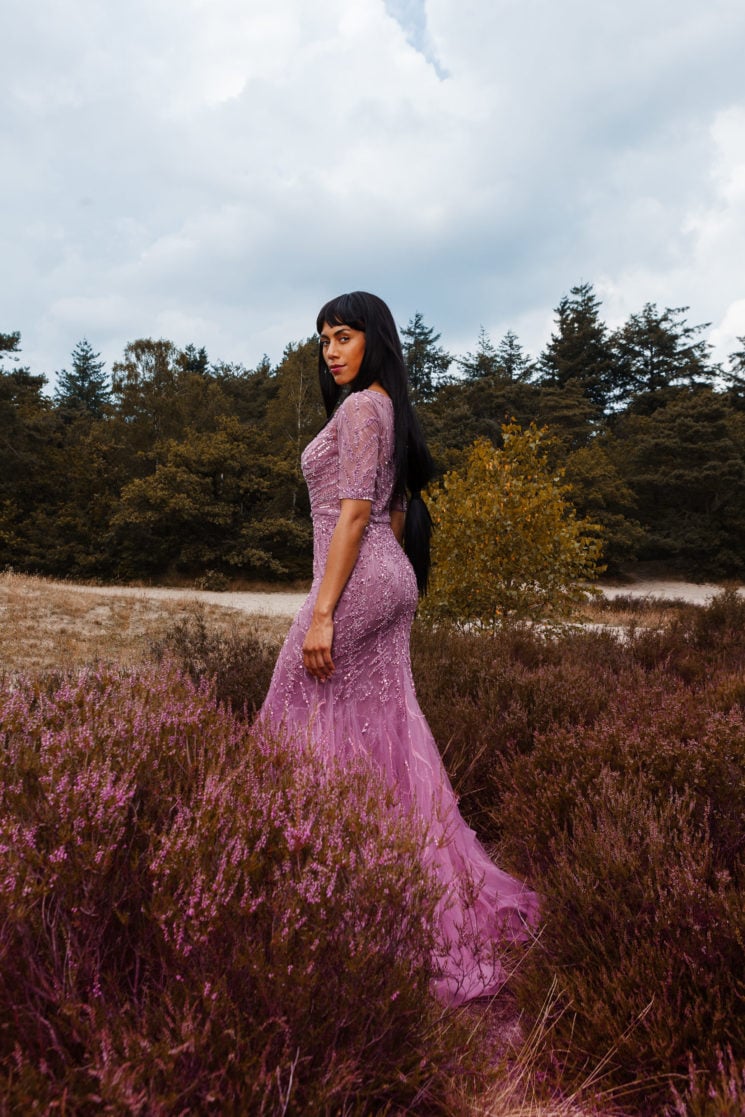 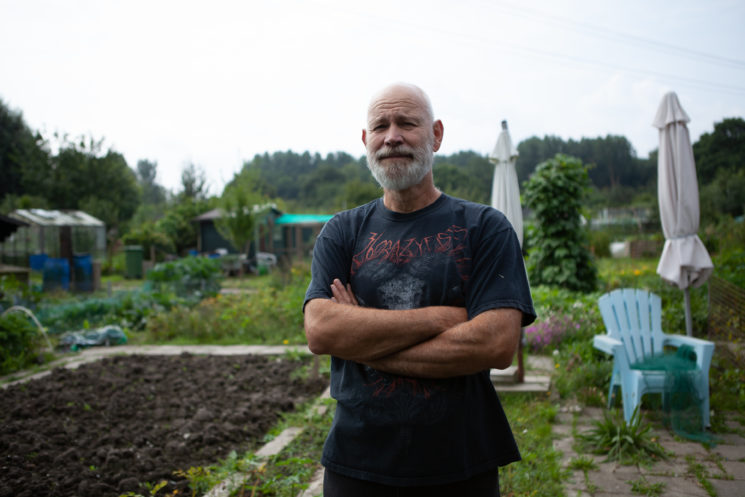 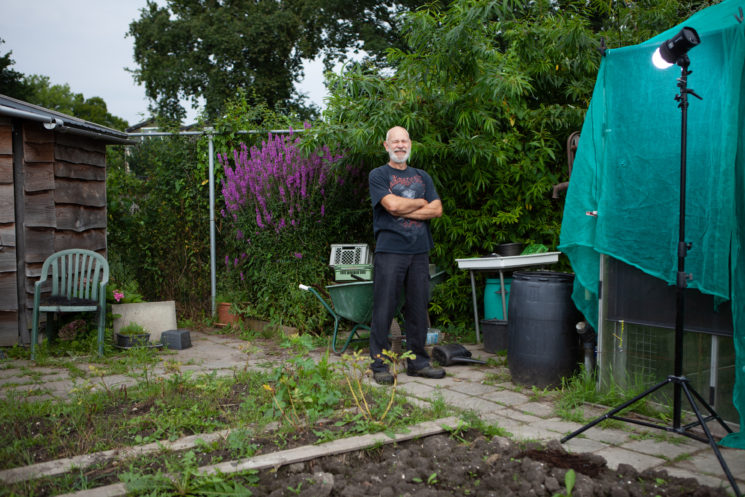 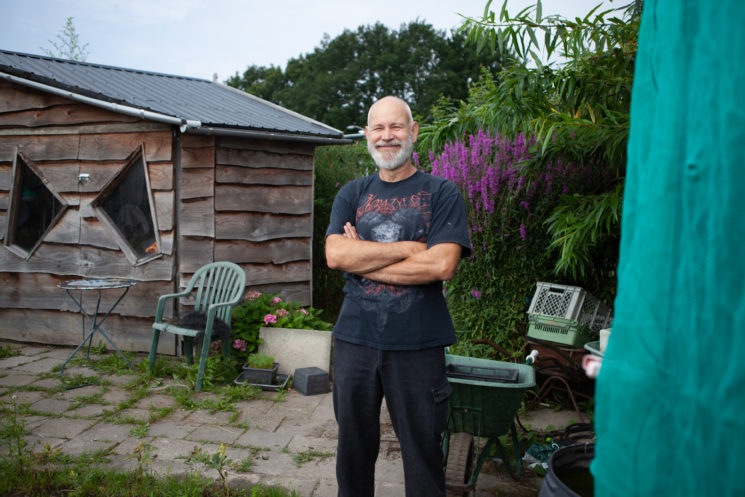 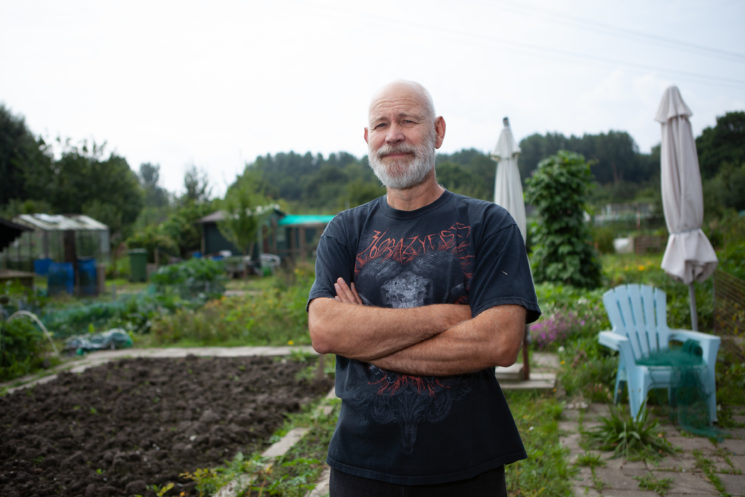 Richard Terborg is not just a portrait photographer – he’s a people photographer in every sense of the term. He loves human-based images as they allow him to develop an emotional connection with the people he photographs. He’s based in Amsterdam, The Netherlands, but you can follow his work from anywhere on his website, Instagram, Facebook, and YouTube channel.