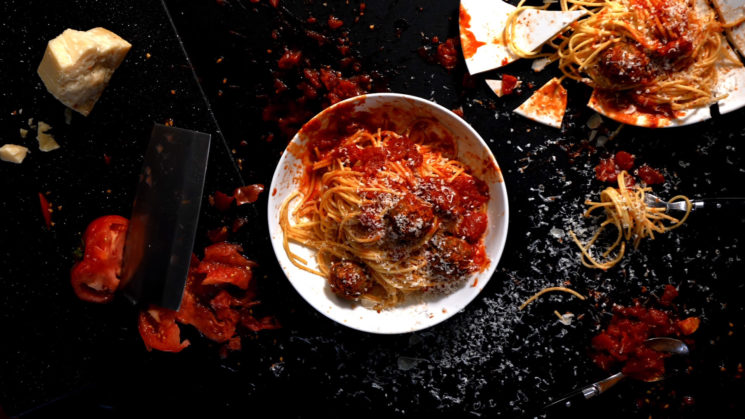 Cooking videos tend to follow a fairly strict recipe (pun intended). First, we’re introduced to the ingredients. Then they dice, chop and mix a few things up. Finally, they pull one out of the oven that they “prepared earlier” that’s been cooking away for a couple of hours. For some celebrity chefs, there’s even the occasional bit of profanity thrown in for good measure.

What if we ditched the reality show style of Kitchen Nightmares, or the studioesque kitchens of Jamie Oliver? What if they were directed by Michael Bay or Quentin Tarantino? A neat thought, huh? Well, these cooking videos from food artist and director David Ma illustrate exactly that. They’re brilliantly put together, and absolutely hilarious.

What if Tarantino made spaghetti & meatballs?

What if Michael Bay made waffles?

What if Wes Anderson made s’mores?

What if Alfonso Cuaron made pancakes?

I can actually imagine that that’s exactly what would be like to watch Quentin Tarantino cook spaghetti and meatballs.

They really are brilliantly put together. The music, obviously, fits with each piece, but the camera movement, slow motion, editing, gravity defying effects and blood spatters. It all just comes together wonderfully. So far, only these four videos exist on David’s channel, but I really hope this isn’t the end of the series.

I’d love to see Ridley Scott make a full English breakfast. In the style of either Alien or Blade Runner. Either would be fine with me. Or perhaps James Cameron making a nice steak. Terminator-style, obviously.

A delicious guide to lighting, shooting and editing cooking videos

Getty Museum challenges people to recreate famous artwork in quarantine, and the results are hilarious