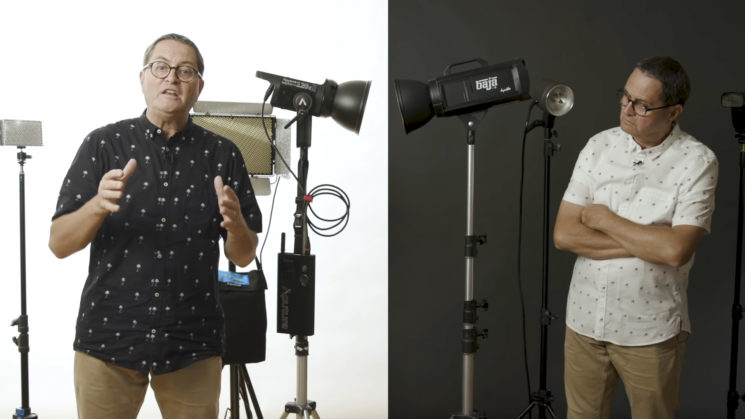 The whole “continuous vs strobes” choice is pretty easy if you shoot video. But for photographers, it can be a little more challenging. New lights of both types are coming out all the time, and a lot of photographers wonder which type of light they should go with. In this video, Jay P Morgan looks at the advantages and disadvantages of both types of lights to see what tasks they’re better suited to.

Jay uses the Dynalite Baja B6 and Aptuture LS120 to shows off some great examples of where each type beats the other, depending on the shot you’re after.

If you want to catch some motion blur, for example, then continuous light that lets you get a slower shutter speed can be fantastic. Your subject might need to hold very still while the world is whizzing by around them, but it can produce a great look. Flash, on the other hand, is useful for freezing motion. To take a fast-moving subject and record just an instant in time.

But he also talks about the shortcomings of both types of light, too.

You often need to raise your ISO quite high or go with a slower shutter speed with LEDs because they put out such a lower power relative to strobes. I know when I’m shooting video at 1/50th of a second, I have to ramp up my ISO to 640 at f/5.6, and my lights are only about 24″ away from the subject. If I want to light a bigger scene, even if I open my lens all the way up, my ISO’s going to get up there.

But strobes don’t really give you the option to be used for both stills and video. Sure, they have modelling lights, and they’re getting more powerful, but they’re still not as powerful as a dedicated LED light that you’d use for video. So, if you want to put them inside modifiers, you need to raise your ISO up even higher to be able to get any kind of decent shutter speed. And you don’t know how your shot’s going to look until you hit the shutter.

Jay covers a lot more of the benefits and pitfalls of each of the different types in the video, so it’s well worth a watch if you’ve been debating which way to go.

For me, personally, I only use my continuous LED lights for photography when it’s products. Still items that don’t move, where I can lock my camera off on a tripod. Where I can shoot slower shutter speeds at the lowest ISO possible and not have to worry about blur from subject or camera movement. Other than that, I only really use them for video.

For photography, give me strobes. Any day of the week.