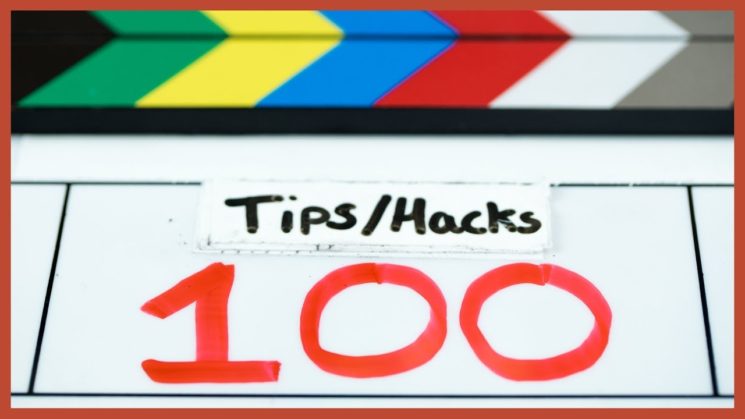 We’ve shared plenty of filmmaking tips and tricks on DIYP. In this video, The Film Look brings you plenty of these in less than ten minutes. To be exact – you’ll learn as many as 100 useful tricks that will make your filmmaking process easier and help you get more organized. And of course, many of these are not just limited to filmmaking. So, photographers, make sure to check out this video, too.

Since one hundred tips are quite a lot, I’d suggest you watch the full video for all of them and take notes on the most interesting ones. Also, perhaps you’ve already heard some of these tips or use some of the “hacks” in your photography or filmmaking. Still, I will give you the tips, tricks or hacks I personally found most interesting, and which can be applied to both photography and filmmaking. And to make things easier to follow, let me sort them into groups.

There’s a lot you can do with some DIY magic. You can create a little tab out of tape to flip out your camera screen more easily. Use white baking paper or a frosted shower curtain to diffuse light. Use Velcro and gaff tape for a variety of purposes on set. Give the sixth use to a 5-in-1 reflector: wrap it around a hanging light and flag it off the walls, so it gets focused downwards. Be creative! And, here are plenty of DIY projects you can work on. It will save you some money, especially if you’re new and your budget is still low. And it’s fun, too!

If you organize your time, gear and work well, it will make the shooting process much more enjoyable. For example, number your batteries so you know how many you’ve used and have left. Add a date to them so you know how long you’ve had them. Print out a small shot list and clip it to your belt so you always have it at hand. Add LED lights to your camera bag and label the lenses so you can find them easily. Also, make sure to organize the files before you start to edit, you’ll thank yourself later.

An important tip many of us often overlook is testing the gear before the shoot starts. Test everything before you arrive on set so there are no unpleasant surprises.

Interaction with actors/models and your team

As a filmmaker, you can ask personal questions to your actors while they’re in character to get to know your character’s backstory. It can also be useful to play music on set to help people get into the role, but photographers could also find it useful to help their models relax.

You should also make sure to communicate with your team: sit down with them before the shoot and go through the entire plan together, so everyone’s on the same page.

Never stop watching films and short films, getting inspired and learning from other people’s work. There are plenty of great YouTube channels dedicated to filmmaking and photography, subscribe to them and use them as a valuable source of knowledge.

As a filmmaker, watch your film and make a list of all the sounds you should be hearing. Make sure to fill in the sound space while editing.

Collaborate: work on other people’s short films, you’ll learn a lot and get valuable experience. But also, don’t be afraid to let people help you with your work. Make your own films, or in other words, just go out and shoot.

When the first draft of the edit is complete, let it sit for a while and don’t look at it for a week. The same goes for the photos you’ve spent hours retouching. Just let it rest before you go on.

Don’t be shy or afraid to show your work to others and ask for feedback. But, make sure to learn how to take it. Ask questions those who read your script, look at your photos or watch your film. This will invite them to give you the feedback you can use to improve your work.

Breaking or following the rules

We’ve discussed this in other articles too: learn the rules of filmmaking or photography before you break them.  And even if you do break them, do it for a good reason. People will know if you don’t get it right.

Also, don’t use effects just because you can or because they look cool. For example, you can put a CD, a piece of plastic, a torch, a glass or anything with a reflective surface in front of your lens if you need some weird lens flares in your shot. You can use a slider or shoot in slow-motion. But, you should only use these effects if they add to your story, not just because they look nice.

Gear doesn’t matter… Or does it?

Well, generally, gear doesn’t matter. You can take powerful, dramatic images or shoot films with brilliant stories even on your smartphone. You can use old prime lenses: they are cheaper, often sharper and have different characteristics than modern lenses. But, gear matters depending on the type of film you’re making. We’ve discussed it here.

If you have a new piece of gear you still don’t know how to use – don’t learn it during the shoot. Take some time before it to master the use of your new equipment. This will spare you the stress and definitely make the shooting more efficient and give you better results.

The final piece of advice in the video is: have fun. After all, filmmaking and photography are the coolest things to do (yes, I am being subjective here). So, enjoy the process of learning and creating, and never stop having fun.