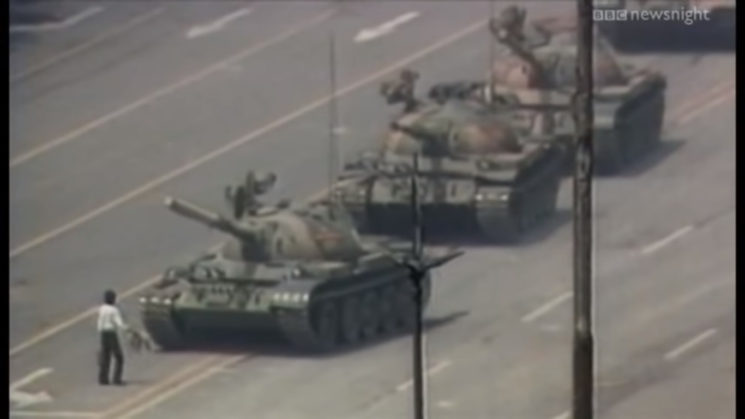 Charlie Cole was born in Texas, USA in 1955. He graduated in journalism from the University of Texas in Denton in 1978, and 1980 he left the USA and went to for Japan. He worked as a photojournalist for magazines such as Time, The New York Times and Wall Street Journal. In 1987 he joined Newsweek, and this job took him all over Asia. Covering the Tiananmen Square protests in Beijing was one of the tasks for this publication.

Cole took the photo with a 300 mm lens from a Beijing Hotel balcony. He assumed that he would be searched by Chinese security later, so he hid the undeveloped roll of film in the bathroom. He wrapped it in plastic and attached it to the flush chain of the toilet tank. The security indeed came to his room. They found his cameras, ripped the film out and left, but the film containing the photos of “Tank Man” remained undiscovered.

Other than Cole, there were three other photographers covering the event: Stuart Franklin (Magnum), Arthur Tsang (Reuters), and Jeff Widener (AP). Widener’s photo ended up on TIME Magazine’s list of 100 most influential photos of all time, while Cole’s image won the World Press Photo of the Year in 1990. The identity of the “Tank man” remains unknown, as well as his fate after the protest. The image is censored in China to this day and just referring to it in a video banned Leica from Chinese social media earlier this year. However, it remains the symbol of silent, non-violent, yet powerful rebellion all over the globe.