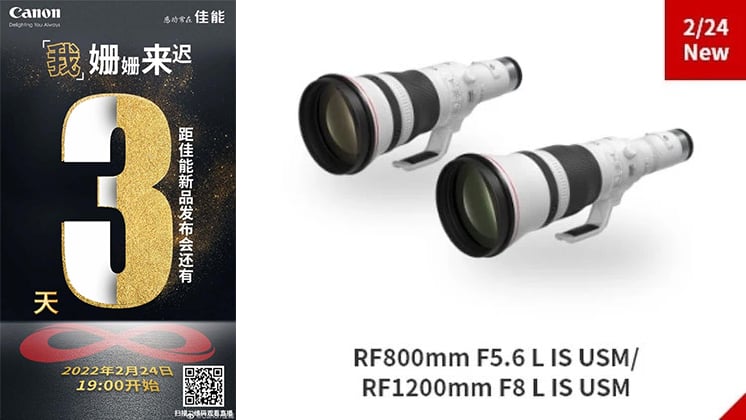 Canon has posted a big announcement teaser to its official Weibo account for something coming on February 24th. And a new image leak suggests it might be the upcoming super long RF  mount 800mm f/5.6L IS USM and RF 1200mm f/8L IS USM lenses. February 24th would mark the third day of the now-cancelled CP+ event in Japan. With an event as big as CP+, such lenses wouldn’t be unusual, but now it looks like we might see a simple online announcement.

Other reports believe that we may also see a new 8K capable camera during the announcement event. They say that the teaser was posted with the hashtag #canon8K, although I’m not seeing that on the original Weibo post, and that the infinity symbol below the number (which is actually a countdown) is just an 8 flipped around on its side. Personally, I think they might be reaching.

A new image posted to Weibo today, confirming that the number is indeed a countdown, has switched that 3 out for a 2. It still doesn’t contain a #canon8K hashtag. 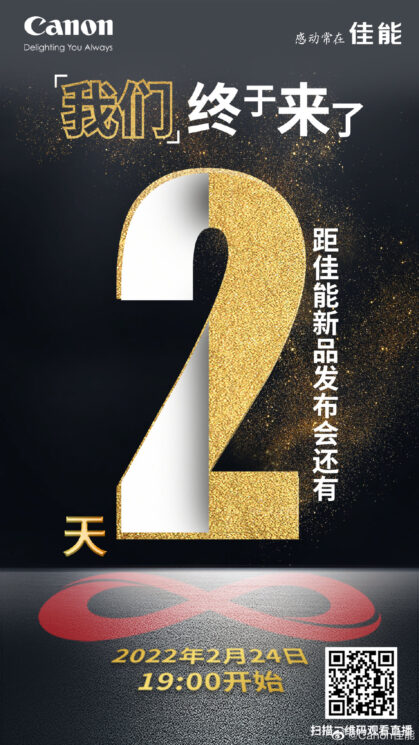 That being said, we are still waiting for that EOS R1 true flagship model (because it ain’t the EOS R3, as Canon pointed out), so maybe we’ll see one. I can’t really imagine it would be anything else if it really is capable of 8K. I doubt it’ll go into an EOS R or EOS RP replacement (although both are long overdue for one). But with images of the RF mount 800mm f/5.6 and 1200mm f/8 L IS USM lenses leaking I think those two might be a pretty safe bet.

We’ll keep you posted as we hear more!