Canon’s illustrations of the upcoming cameras

The photography world has not yet settled after Canon’s announcement yesterday that it has developed a 250 megapixel sensor and the Japanese giant is once again making headlines.

Unlike the record-breaking sensor which is not expect to make its way to consumer cameras anytime soon, if at all, today’s announcement unveils the company’s next generation cameras including an-EOS series DSLR with a 120 megapixel CMOS sensor.

Other than the DSLR that will make the 5Ds look like an obsolete toy, Canon is also developing an EOS series 8K cinema camera and an 8K reference display.

Unfortunately Canon hasn’t shared too many additional details at the moment other than an obvious statement that the high-pixel-density sensor’s resolution will be “more than sufficient” for large prints and cropping.

While Canon has already stated that 60 of the company’s 96 EF lenses will be compatible with the upcoming DSLR, the real question is how many of them will be able to produce decent images with the densely-packed sensor.

Canon does not specify the sensor size and whether or not it will be the previously developed APS-H 120MP sensor. I’m hearing some online chatter favoring both options, so we will have to wait and see about that.

That’s pretty much all we’re given at the moment other than some marketing fluff and as happy as people will be to see this teaser, two big questions remain unanswered – when and how much?

My guess – not anytime soon and plenty.

I believe that both factors will be largely determined by Canon’s competitors. There’s no rush to release such a massive megapixel upgrade when the current MP king is a Canon and the runner up is far behind. It’s not as if there’s an insane demand or need at the moment for a 120MP DSLR, so Canon will not be taking over or revolutionizing the camera market with this camera.

The price will also depend on the rest of the market, as well as the marketing team. If no other DSLR in that range will be developed, Canon will be able to price it with only medium format cameras in mind. If it can’t be compared to a similar DSLR then the price could come down to the marketing team’s effort and what they believe is the most they can squeeze out of customers before they decide to give up on the pleasure.

The release date of the camera could very possibly be determined also by the advancements of surrounding technology. I mean, who will buy a 120MP camera if computer hardware, software, memory cards and lenses can’t support it?

All in all I’m pretty excited about this camera, even if it’s only unique feature will be the amount of pixels. With all the downsides that come along with it, so far I’m enjoying the megapixel battle between Canon, Nikon and Sony.

Will this camera be the most amazing thing ever? Probably not. With so much hype being built around the pixel count it might be a one-trick pony. 120MP of a pony, but still.

That being said, this camera will bring us one step closer to the 250MP DSLR and that will be pretty darn amazing! 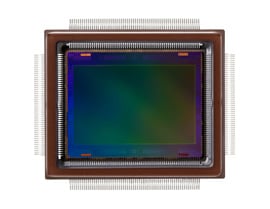 Other than the DSLR, Canon is also working on a mind-boggling 8K cinema camera “facilitating not only the input and output of 8K video content, but also such processes as 8K to 4K down-conversion and 4K cropping”.

The camera’s Super 35 mm-equivalent CMOS sensor will boast roughly 36 megapixels (8,192 x 4,320) and will allow a frame rate of 60 fps. Other specs mentioned are a 13-stop dynamic range, EF mount compatibility, and a mobile design.

Obviously such a camera cannot be put to good use without an equally impressive monitor, so Canon is also working on an ultra-high-resolution 8K reference display. The display will exceed a pixel density of 300 pixels per inch, which Canon say approaches the limit of human visibility, and will achieve “high brightness, high contrast (high dynamic range) and a wide color gamut”. 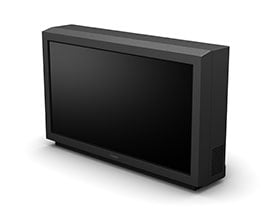 Illustration of the 8K monitor

What do you think about these new cameras? How long until the market it ready for 120MP or 8K and what will be the limiting factors?