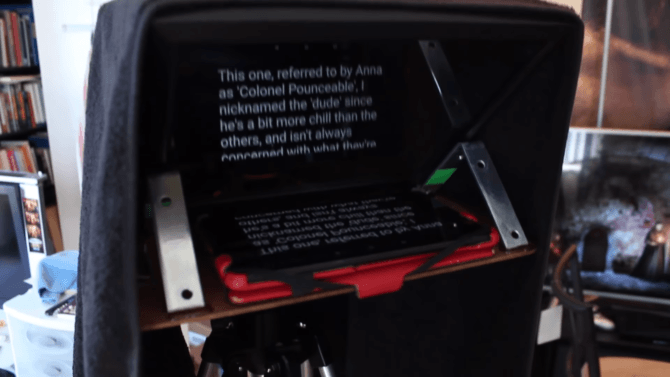 If you speak to camera often, then there’s no getting away from the value of a teleprompter. But, those things can be expensive. There are less expensive options out there, but what if you need something a little bigger and want to spend even less money?

Well, that’s where this video from Skeptically Pwnd comes in. With a clipboard, a couple of L brackets, and a piece of glass (well, and a couple of other bits), we get a fully functional teleprompter that can handle a large tablet.

I will warn you, though, there’s some language in this video that is definitely considered “adult”, so don’t have your speakers on if there’s kids around.

Breaking down a teleprompter into its simplest components, a piece of glass at 45 degrees and something to block light leaks on the camera, it’s a simple build.

His total cost was $26 because he had a few bits laying around. He suggests that the total cost would be around $56 if you had to buy everything. But, I think you could get it for a lot less, though. If I were to slightly alter the plan, I’d suggest this.

In my list, I swapped out the rail mount for a simgple 1/4-20″ 4 prong t-nut. This means that you can just screw any tripod mounting plate straight onto it. So, no messing around with adapters and rails.

My total cost with the above list would be $37.83. If you’ve already got an old towel you’re not using any more, then that comes down to around $30. The angle brackets you could also get for about half that cost at a local hardware store. This would give you a fully functional tablet sized teleprompter for about £25.

Not a bad deal at all, and certainly cheap enough to tide you over until you can justify a proper one.

Do you use a teleprompter for your videos? Did you build your own or just buy one? Let us know in the comments.

How to build a DIY Teleprompter