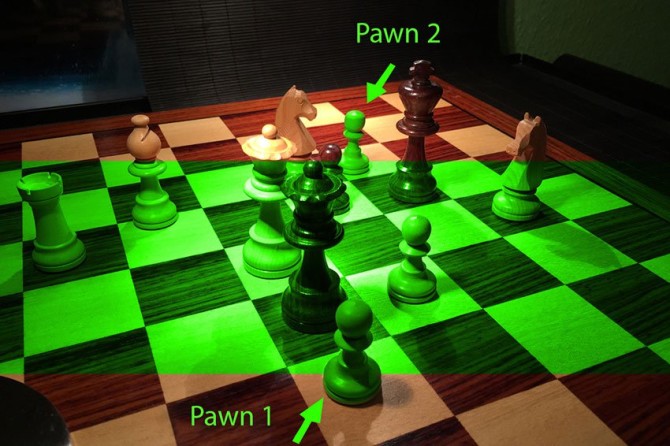 This tutorial is about how to obtain a large depth-of-field using focus stacking.

As Alex, I use focus stacking (or “deep focus fusion”) quite often and most of the time I just shoot a series of photos with varied focus instead of a series with varied distance, using a rail.

Until now I always thought, that approach is a bit dirty, because it introduces changes in the magnification, but often it was the only way, because the depth of the object was far too deep for any rail. Imagine for example shooting a landscape. :-)

But now, I wanted to know for sure what is the better method and and did some tests.

One thing I can say to start with: With complex scenes, it is a good idea, not to change the position of the camera!

My little test scene is a chess board, and the view through the little chessmen is full of occlusions. This should be a really complex scene for any kind of stacking method, and so I think, it is a good choice. 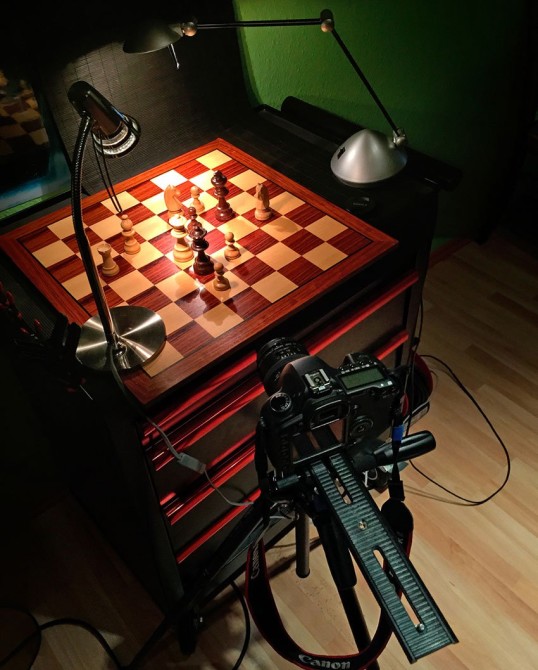 I chose the distance, I wanted to render sharply from Pawn 1 to Pawn 2, as this is quite exactly the length of my macro rail.

Here you can find the same macro rail I’ve used

Only for the very last test, I also did a scan of the complete scene including all the chess pieces.

Results With The Macro Rail

(Note: all shots from now on are straight-out-of-camera)

Whew, I did not expect *this* crazy result: 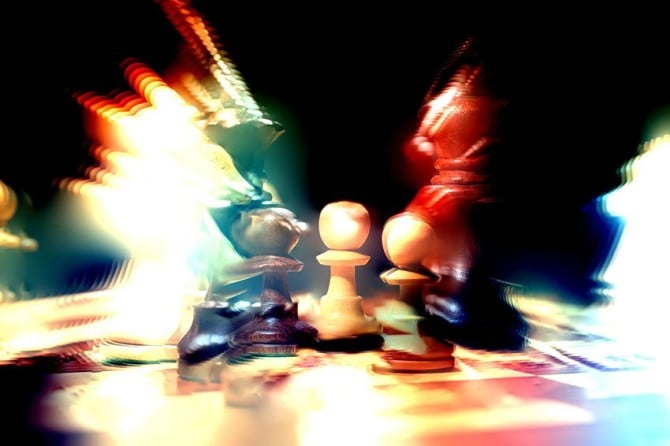 Normally, this should be a great advantage for the stitching algorithm, because now, all the stitching borders have the same size.

To prove this, I inserted Pawn No. 2 from the last shot in the series in to the first shot (see the green box). 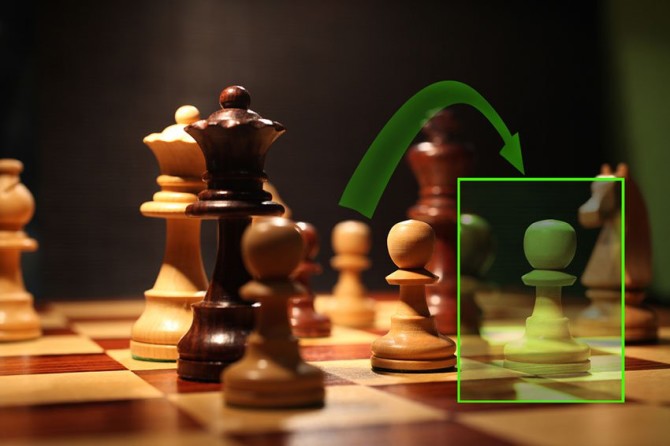 A closer look reveals the problem.

In the following screenshot I have arranged the first and the last shot in the stack side-by-side, and it can be easily seen, that the use of the focusing rail leads to changes in the perspective in a way, that no stitching program can solve this. The occlusions change. 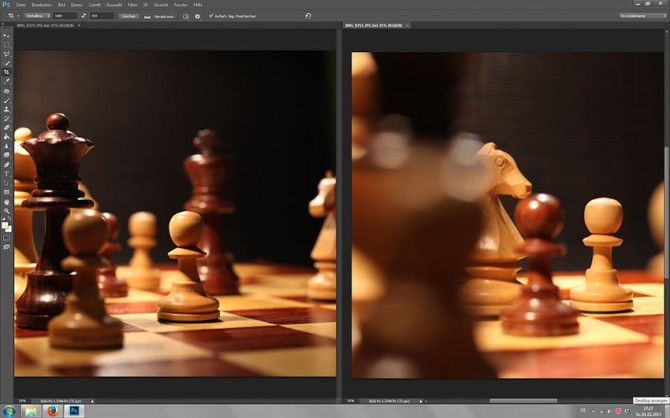 But a little trick might work, I thought: For the second test, I used the same stack but did an alignment step with Photoshop first.

See the screenshot of the resulting layer stack…. it looks sort of funny, how Photoshop tried to reconstruct a global perspective (a classic or so-called “entocentric” perspective):

The result of the stacking with this layer stack is a bit better, but still not really good: 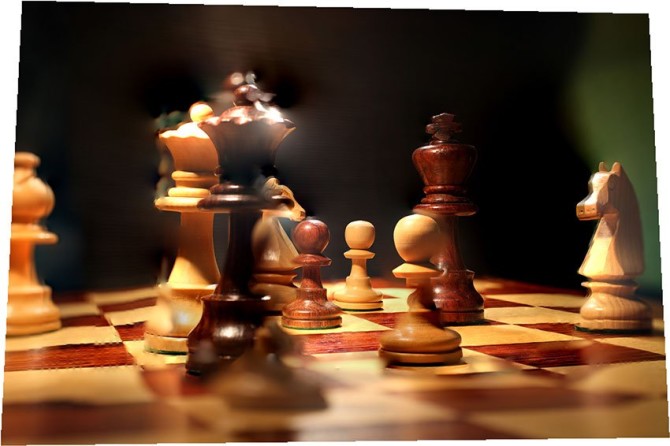 In the next experiment, I kept the position of the camera unchanged and recorded the series by variation of the focus of the lens: 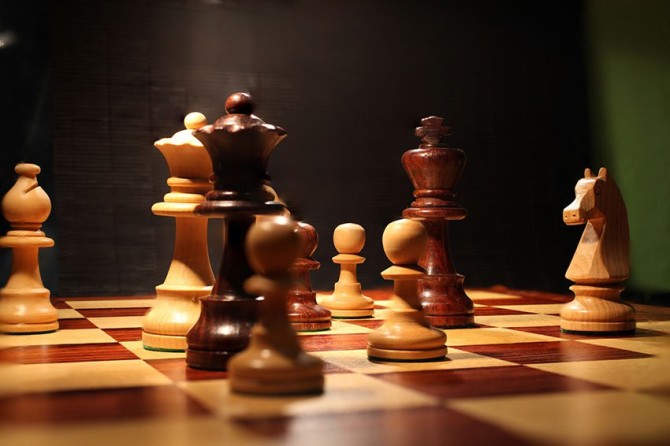 Ok, this is better and this result encouraged me to also try the whole scene with all the chess pieces. 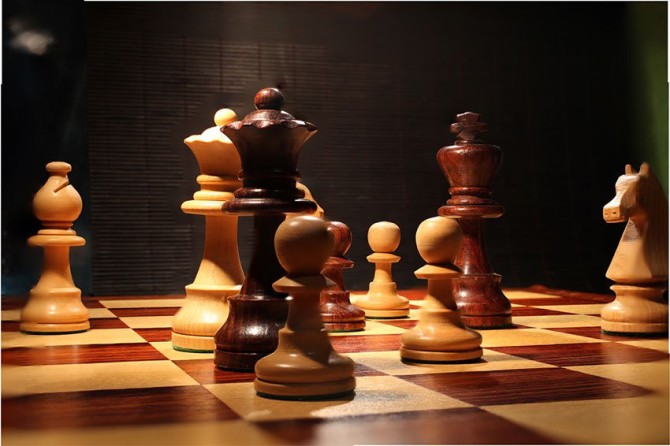 This result is still not perfect, but, as I said, it is straight-out-of-cam. With a tiny bit of touch-up, one could repair the little errors and the result would be quite nice (given the complex scene).

An interesting source, that also compares “Ring” versus “Rail”, is the website from the software team of “ZereneStacker”. So, if you are interested in more information about focus stacking and about the advantages and disadvantages of macro rails, you might have a look at their website: http://zerenesystems.com/cms/stacker/docs/troubleshooting/ringversusrail

Tilo Gockel is a professional photographer and expert in the field of photographic technique, lighting and flash lighting. His blog, offers numerous tips and tricks learned from his extensive experience with photography. You can visit his (German) blog here, he is a contributor to Photigy, where this article was first published. 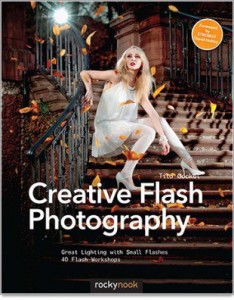 Then you also might like Tilo Gockel’s new book “Creative Flash Photography” that was recently released. Definitely worth a closer look!

Lots of stuff in there, how to calculate with light, how to choose your equipment, how to light food, people, products, … even underwater shots, splash shots and extreme macro shots.

Here you can preview image gallery from the book.