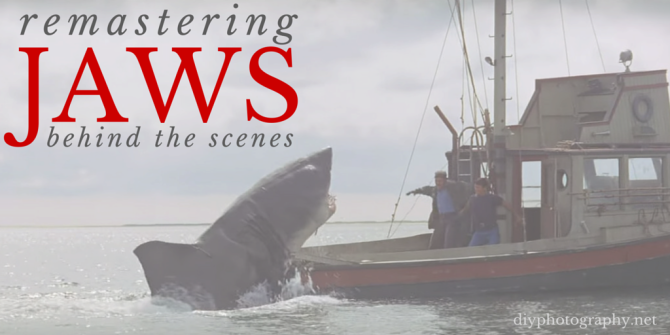 Here’s a really in depth behind the scenes look at an aspect of photography and cinematography that we rarely get to experience. As part of their 100th anniversary, Universal Studios gave the iconic 70’s film (that’s given sharks everywhere a bad rap) a breath of fresh air. The mini documentary is pretty interesting as it walks you through the entire remastering process from start to finish.

The original reel, which was shot on 35mm film, had suffered some damage throughout the years and would need to be repaired. They used a wet transfer film gate to repair the scratches, which essentially scanned the original negatives while they were wet. It’s actually a really neat process and you can see more of it in the 8:30 minute mini-doc below. You’ll also be treated to a peak at the digital editing process, along with some before and after shots which are pretty astounding.

The remastered version of Jaws has been out on BluRay since 2012 and, I should warn you, after watching the clip you may have the urge to watch it!

« Watch: Jackie Chan Trashes A Studio To Fight Off ‘The Bad Guys’
We Got A High End Strobe System For 4 Days – Here Is What We Did With It »