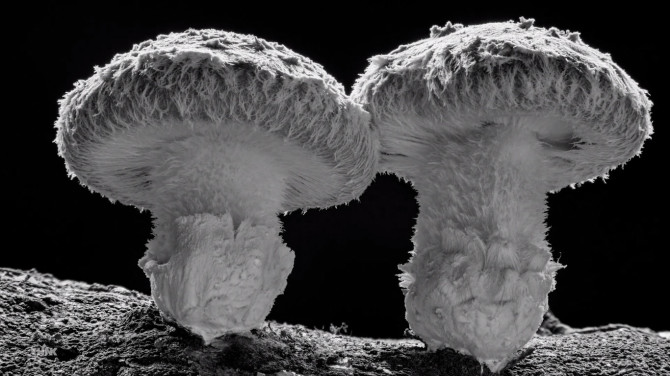 After 12 months of hiking through California, North Carolina, Georgia, and Alaska the team behind Upthink Lab have released a five minute long timelapse of their adventures that features some pretty impressive moments. Wanderment is meant to create a juxtaposition between the different landscapes of North America, a purpose the filmmakers pushed further by switching between color and black and white footage throughout the clip (all of which is in 4k).

You’ll be treated to an array of vivid landscapes in addition to some really cool macro slow motion of growing mushrooms, which is reason enough to watch the timelapse. There’s also an interesting transition at about 1:52 where the camera makes a fluid transition from underwater to above the surface. The shot was captured with a Canon T3i (with Magic Lantern) in an underwater housing mounted on a custom motion control dolly.

“The under/over water surface shot was achieved with a custom motion control dolly (8020 parts with an end mounted stepper motor) and a Canon D-SLR in an underwater housing. I used Magic Lantern to gain full manual exposure control and intervalometer triggering directly within the housing. A custom stand-alone eMotimo TB3 controller (basically the TB3 guts removed and housed in a 3D printed enclosure) ran the sequence at an extremely slow, continuous speed while shooting. It’s a single pass move just before sunrise– allowing acceptable exposure above and below the surface.”

That’s right, they 3D printed a custom enclosure and dolly for their eMotimo TB3. You can learn more about that fun little project, including what you need and how to make it, here. In the meantime, feast your eyes on this:

Living in North America? Here is your shot at winning at kick a$$ travel video tripod