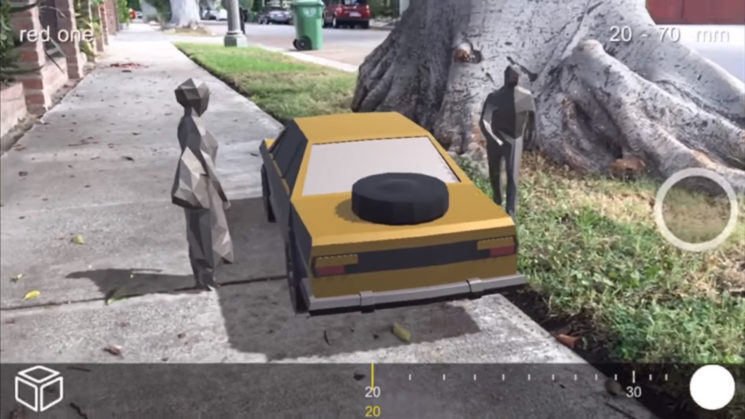 Augmented reality has mostly been a bit of a gimmick so far. To put dinosaurs on your desk, or help guide you around a city. It’s very cool, but still mostly just a gimmick. Now that the hype of augmented reality has started to die down a little, though, things are looking up. It has made some pretty great strides over the last couple of years. Particularly in fields such as healthcare.

Now, though, filmmakers are starting to see some benefit from augmented reality, too. A new app, Blocker allows you to block out your scenes based on what the camera sees, enhanced by 3D models. The app, in real time, tracks the models to the scene, allowing you to work out your angles and shots, while at a location, in advance of the shoot.

The app looks at your scene, figures out approximately where all the surfaces are, lets you import 3D models of people, cars, and other things. The models can be scaled up or down to match your real life subjects, and then the scene is tracked as you move the camera. This allows you to check out different camera angles while at a location without wasting the time of your talent & crew.

You can also change the lighting around, by adjusting a virtual sun inside the app to simulate different times of day. The app also allows you to simulate the sensor size & focal length ratio of various cameras including Canon, RED, BlackMagic, Arri and a whole bunch more. You can also pop out of the camera’s viewpoint to see where it is in 3D space, and where it would sit relative to your subjects.

Sure, it can’t fake the resolution, depth of field or dynamic range of a RED Helium 8K, but this is blocking. It’s a representation. It’s framing out your shots to plan ahead for when you do the real thing. The kind of thing that is perfect for creating storyboards. Each of those shots can then be saved out for your own reference, or emailed or texted out to crew and clients to get feedback.

It’s one of the first practical uses of augmented reality that I’ve seen for photography or filmmaking. But I have a feeling this is just the beginning of the augmented reality revolution for these industries.

Blocker is available now in the Apple App Store, and does require iOS11 and iPhone 6S or newer iPhones. So, if you haven’t upgraded to iOS11 yet, you won’t be able to use it. It’s free to download and check out, but the full app is an in-app purchase of $49.99. Exactly what the differences are between the free and full app, I’m not sure. I’m still on iOS10.

It’s pretty expensive for an app, but I think well worth it for what it allows you to do. Not to mention what it will allow in the future as the software develops and mobile devices get even more powerful.