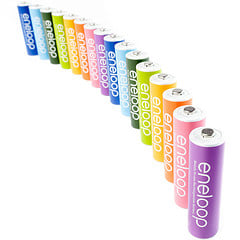 As a child we used to have a special plastic container in the fridge. The battery container. At any given moment it had a about two dozen batteries.

As I grew up and started to use a camera (a used Nikon F70) and a strobe (A used SB28), and then 5 strobes  it was only natural come up with a better system.

A system that would be kind to mother earth on one hand, and will allow me to shoot as much as I want on the other. The system evolved over the years, and will probably keep changing. This is where I stand now.

Why “Regular” (or Primary) Batteries Are Bad

Primary batteries are the use-and-throw kind of batteries. The ones you get by default with your RC car.

They are cocktailed with just the right mixture of fun, healthy ingredients. Stuff like lithium, Alkaline, zinc & carbon. Or some other crap that will go into the ground water if not properly disposed.

Primary batteries may seem like a cheap solution, but consider the amount of flash pops you can get out of 43cent worth of battery. You’ll have to pay those 43 cent each time you change batteries.

The system I use is disposable batteries. And Yes, there is a system. But first the promise:

So yes, I use rechargeable batteries. Here is how I do it.

Usually two sets are enough for any shoot, but if I know it is going to be a very long day, I bring a charger with me, and each set that goes out the strobe goes in the charger. They usually get filled up faster than I can drain them.

To Start with, let me share the one I use: The Maha PowerEx MH-C801D.

Turns out that the charger you use has a lot of impact on your battery life. And in rare case on your life too.

The way I see it, there are three things to be looking in a battery charger:

The Maha above is all that and more since it has a external power converter which is useful when you change countries a lot. If you don’t need the external cord there is a slightly cheaper model with power cord inside.

Remember I said that all my bats are always loaded? This is because I switched to low dissipation batteries. Cheap rechargeable loose power even if they are not used. It’s called self discharge. Depending on the battery brand and age some will go almost completely drained in about a week.

I use a mix of Eneloop and Recyko+ both are low dissipation batteries. I have about 8 sets. I charge all batteries on a regular basis as part of my unpacking routine. so whatever battery I have in my bag, I know is good.

To be completely honest I also carry a closed 4 pack of Energizer Lithium AA batts. Just as an emergency backup. They have been in the bag for a year and were not opened yet.