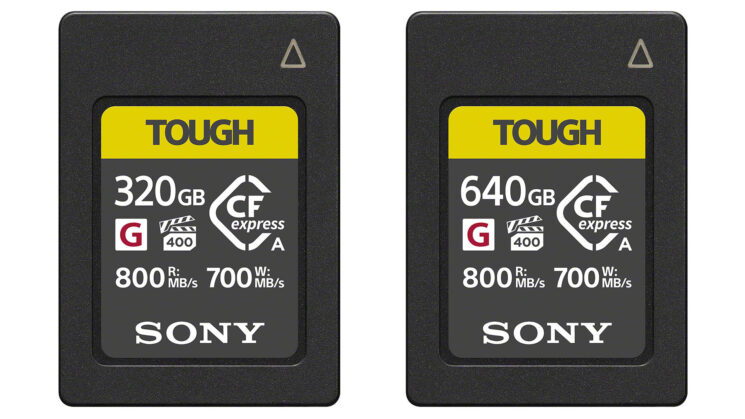 Along with the announcement of the new Sony FX30 APS-C cinema camera, Sony has also released two new capacities of their Sony Tough CFexpress Type A memory cards. This expands their existing 80GB and 160GB capacity versions with 320GB and the largest CFexpress Type A card to date from any manufacturer at 640GB.

The new large capacity cards offer maximum write speeds of up to 700MB/sec and sustained write speeds of up to 400MB/sec for the kind of 4K 120fps high bit rate video shooting that the Sony FX30 and FX3 provide. They’re also part of Sony’s “Tough” line, which means they’ve been certified waterproof, dust proof and durable enough to withstand harsh environments.

CFexpress Type A is still a pretty low market right now, as only a handful of cameras from Sony actually use the format. Pretty much everybody else that’s using CFexpress is using the Type B variety. But, Sony is not the only manufacturer of CFexpress cards, as they’re also made by ProGrade Digital, Lexar, Delkin and Exascend, too. The new 640GB version from Sony, though, does beat out the competition, who so far tap out at much lower capacities.

The new Sony cards are not cheap, though, by any stretch of the imagination. The 320GB version of the card is $649.95 and the 640GB version is $1,249.95. When you consider that something like the OWC 2TB Atlast Pro CFexpress Type B card, offering maximum read and write speeds of up to 1,727MB/sec and 1,517MB/sec respectively costs only $669, that’s pretty pricey!

Sure, the Sony FX30 might be a bit of an inexpensive camera at only $1,798, but if you need to spend $2,500 on a pair of 640GB memory cards to get the most out of it for your needs… Yeah, that’s a pretty hard sell at around $4,300 total. I expect UHS-II SD cards will still be the memory card type of choice for a while for most of those Sony shooters that have cameras with dual format dual card slots until there’s more competition in the Type A market.

« Meta launches text-to-video generator and it’s giving me nightmares
Should photographers be worried about AI in photography? »