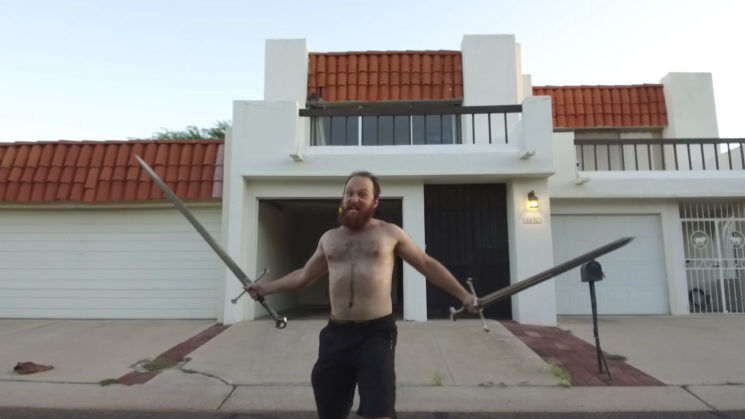 One would think that shooting video would be fairly straightforward these days. With all the advances made in video-capable cameras the last few years, a newcomer might assume it’s simply point and hit record.

But if you want to make the most of your equipment and get the best shots you can, this is simple not true. In this video, filmmaker Darious Britt talks about the 9 things he checks before he hits the record button. His checklist might not be perfect for everybody’s workflow, but it’s a great starting point for developing your own.

This sounds obvious, but it’s one that many seem to skip over. Unless you know for sure that you want the camera at an unconventional angle, levelling your camera is pretty important. When your horizon’s off, it can be jarring for the viewer. Sure, you can rotate the footage in post, but often at a loss in quality as you have to scale up the footage to fill the gaps.

Darious checks his memory card at the beginning of the shoot to see what’s on it. If there’s something on it, he scans through it to see if he needs to keep it or can safely delete it.

This is something I prepare way in advance of actually shooting. At the end of a shoot, the first thing I do is transfer cards over to at least 2 locations. Then the cards are wiped in the camera and then go back into my case. If a card is in the case, that means it’s safe to use, and anything that might be on it is safe to delete.

My projects are almost always 1080p, but I’ll often shoot 4K. This just gives me more wiggle room in post to scale, rotate or stabilise footage if needed.

Like Darious, I typically set my camera’s picture style to “Neutral”. Whether I’m shooting Canon, Nikon or Sony, it just tends to give me enough information for my needs without having to mess around with things like Cinestyle or S-Log. But, depending on what you’re shooting, Log might be a better way to go.

Darious uses the camera’s built in white balance presets. I often do, too, but occasionally I will need to shoot a custom white balance in certain environments. When I start recording at a particularly lighting or colour tricky situation, I’ll also grab a few seconds of footage including the ColorChecker Passport Video to ensure it’s correct in post.

With stills photography, the shutter speed usually defines the exposure. But with video, your shutter speed is fixed, so ISO becomes your primary exposure setting. Darious shoots ISO 100-200 during bright outdoor conditions, and indoors he finds ISO 800 gets him where he needs to be. On his camera, he doesn’t go higher than ISO 800 due to the noise it can generate. But, with a newer camera, you can go much higher without having to worry about it.

Focus can be a pain, especially outdoors in bright conditions. Most video-capable DSLRs and mirrorless cameras, though, have a feature which lets you zoom into the scene. Use this to your advantage. Zoom in to fine detail, adjust your focus manually, and then zoom back out to view the whole scene.

Darious put this one last, but for me this goes before focus. Adjusting the framing or composition even a little bit can mean that what was in focus is now no longer in focus. I’ve made this mistake in the past when rushing and forgetting to adjust focus after I pan or tilt the camera slightly when using wide apertures.

Once you’ve checked all these things, it’s time to finally hit record. Fortunately, for many of these things, you only need to check them at the start of the shoot. Checking your memory cards, frame rate & resolution settings, picture style and shutter speed, you don’t really need to worry about them again.

Even the white balance can often be ignored. It’s consistent throughout the shoot if you’re under artificial lights or you can get things done quickly enough outdoors.

When I’m going out to shoot video, there’s a few other things I check, too.

What’s on your checklist?

Infographic: 8 Things to Check Before Taking Your Drone Airborn