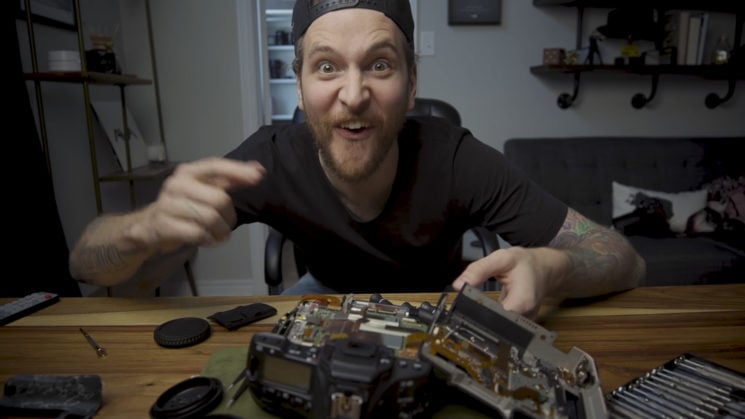 Oh, that crazy Peter McKinnon. At it again with his wacky adventures. This time, though, even by his own standards, he’s gone a little overboard, I think. Of course, when somebody like Peter McKinnon decides to have a go at doing his own teardown video, I’m not going to object.

This all began with an ATV mishap that destroyed the microphone socket on his beloved Canon 1DX Mark II. After calling Canon to see what could be done about it, they shipped him out a temporary replacement unit and told him to send his back in to be fixed. But between receiving that and actually sending his to Canon, though, Peter got curious and decided to open it up (his old one, not the new loaner).

In true Peter McKinnon style, it’s a combination of semi-organised chaos with a little logic. He quickly figures out that all the screws are housed underneath the rubber grip encasing much of the camera. And after a brief timelapse, and a dramatic attempt to find the final screw, it splits in two like a coconut. 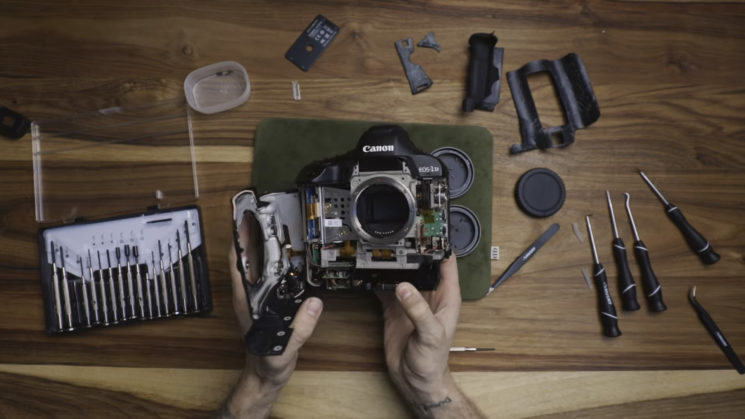 After walking through various parts of the camera’s internals to figure out what’s what, Peter finds his limits. He doesn’t want to break the thing. He just wants to explore how it’s put together. To see the tech that sits under the hood in the device he uses to earn an income. And it’s an impressive looking hunk of metal, plastic and silicon.

Ultimately, though, Peter has to put the camera together in full and complete working fashion – well, except for that microphone socket – in order to send it back to Canon for its actual repair. Which, fortunately, he managed just fine. Surprisingly, he had no screws left over (almost, though).

Obviously, this is one video he doesn’t recommend people try at home. He did this so that you don’t have to.

Of course, it’s your camera, but if you kill it, you’re on your own.

Pegasus ripped the guts out of Nikon 24-70mm f/2.8 lenses and put them into cinema housings

« New Sony RX0 addon lets you control up to 100 cameras at once
Weather sealing test kills Sony A7RIII but not Nikon, Canon or Olympus »