As part of the ongoing Studio @ Home series, I asked DIYP readers, what is your favorite photographic light.

By that question I meant what is the light source you love most when you are taking pictures. Strobists you can cheer, but it was a close match. Again, thanks for all who voted and commented, it helps us learn about the trends, and makes a great community feeling.

Results and some thought after the jump. 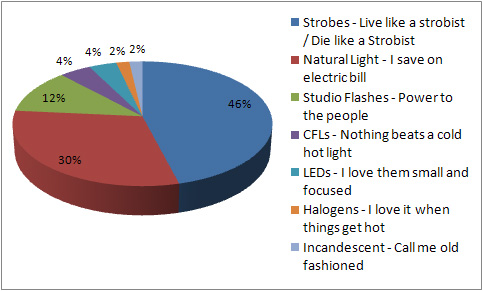 A large part of DIYP readership are strobists at heart. This is no surprise as we deal quite a lot with lighting hacks and frugal setups . I was not surprised at all that strobes came up first with just a penny under the half mark.

The next in line was a bit of a surprise for me. A good surprise. We deal with strobes, snoots, umbrellas and grids so much here that I was expecting the second in line to be studio strobes. The fact that natural light came second tells me two things – one: we have a wonderful audience that has not yet made the jump into artificial lighting – great, that a joint learning experience. And two: maybe the natural light photogs are doing great with homemade reflectors and foam core.

Third in line are studio strobes, the big guys. I will cover those later on the series, till then it is suffice to say that when power and reputability are needed there is no match for fine studio strobes.

The rest of the votes distributed between the various light sources: CFLs, LEDs and warm worklights.

Share Your Blog, Site or Gallery With DIYP Readers