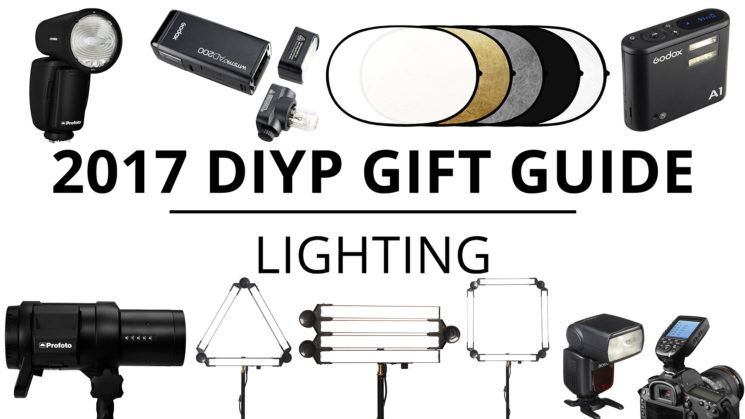 So, you’ve got your camera and your lenses, but now what? The days are getting shorter, and darker, potentially limiting what you can shoot, and for how long. Even when the weather is great and the days are long, the available light doesn’t always give you what you want and you want to augment it or obliterate it completely.

So, here we’ve put together some of our favourite lights and lighting accessories, including quite a few that we use ourselves on a regular basis for both photography and video work.

The standard round reflector is a popular tool, but personally, I’m a portrait guy. My subjects often usually fit inside a 32″ circle. So, I prefer long oval or rectangular shaped reflectors. This way, I can fill in the shadows on a full-length portrait, or use it as a very large soft light source for a simple headshot.

Godox A1 Wireless Flash for Smartphones – $69 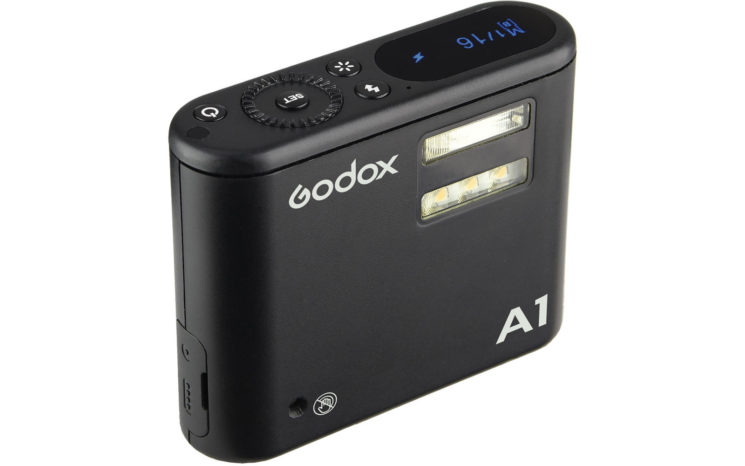 While not necessarily to everybody’s taste, the Godox A1 is a versatile little unit that offers a myriad of functions. For a start, as the name suggests, it’s a wireless flash for smartphones. Yes, that’s right, finally, you can get off-camera flash with your smartphone. But not only is the A1 a flash in itself, but it can control Godox’s entire range of 2.4Ghz lights.

If you don’t want to shoot photos with your phone, you can still use the app to control the power of your lights when shooting with a DSLR and the X1T or XPro trigger, too. The app offers lighting presets, and it also allows quick and easy adjusting and triggering while you wander around to take light meter readings on-set. This lives in my own camera bag permanently now. 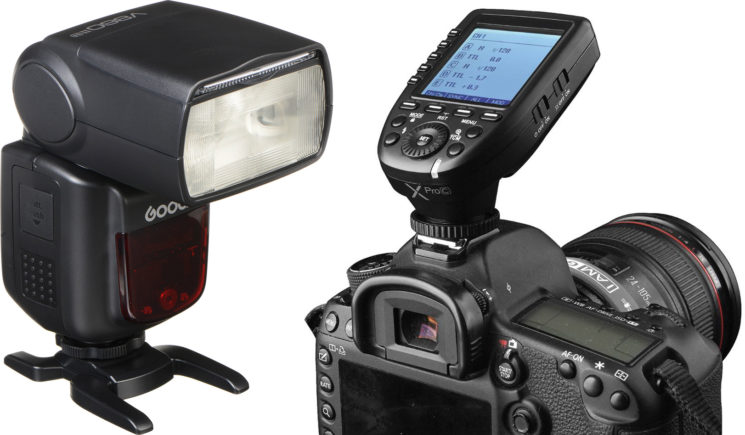 Currently available for both Nikon and Canon, the Godox XPro is a fantastic trigger offering features of systems many times the price. It has a super quick and easy to use interface to speed up your shoot workflow and offers a fairly unique TTL to manual exposure conversion system. You can read our thoughts on the Godox XPro trigger here.

The Godox V860II speedlight is a very capable flash that can be used either on or off the hotshoe. If you don’t need TTL, you can save a little money by getting the Godox V850II for $139. If you prefer AA batteries instead of a proprietary Lithium Ion battery, instead of the V860II or V850II you can get the TT685 or TT600 respectively.

If you shoot Sony, Fuji, Olympus or Panasonic, you might want to buy the V860 with the X1T trigger for your camera. Or, just be patient. The Sony version of the XPro is due next, followed by Fuji, and then Olympus/Panasonic. 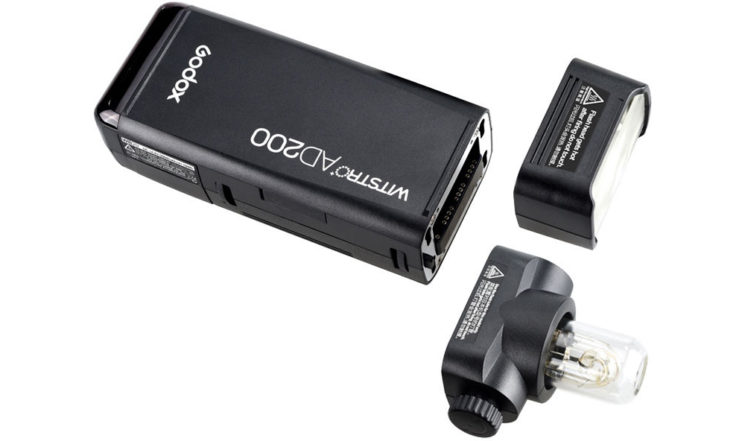 This list is starting to look like a “Godox Christmas Special”, although that’s not intentional. They’ve just put out some great products over the past year that are well worth considering. One such product is the Godox AD200, which is a rather unique light. It’s small, like an oversized speedlight, and somewhat modular. You can actually remove the heads on this thing to turn it into a different type of light. It comes supplied with a speedlight style Fresnel head, as well as a bare bulb head, more common to studio strobes. You can also pick up an LED light head attachment for video use.

You can use this with the same XPro trigger from the V860II suggestion above, to add it to an existing setup. Or you can buy the AD200 with the XPro trigger together as a kit for $368.

Traditionally, LED lights haven’t tended to be high up on my list of “must have” lighting gear. Spekular, though, has started to change my mind. It’s partly down to the fact that I’ve been shooting more video over the past year than stills, which has made me take them a little more seriously. Spekular, though, has exceeded my wildest expectations. I’ve even taken to shooting some stills with them, too, due to their lack of flicker, providing consistency between shots.

The core spekular core kit comes with four separate LED strip sections, each being the equivalent light output to about a 150 Watt tungsten light. You can use them as a panel, or with the adjustable connectors to make triangles, squares and other shapes. Once you add the expansion kit, you can quickly turn this core kit into a 2 or 3 light setup. 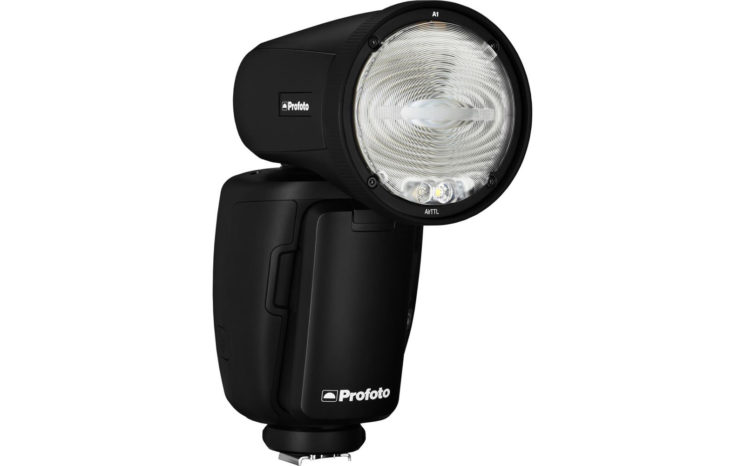 While this speedlight might seem expensive at first, for those who’ve already bought into the Profoto system, buying one of them can make a whole lot of sense. For a start, it’s the only speedlight that’s fully compatible with Profoto.

But, it can also double up as a commander to control your other Profoto strobes. If you don’t already have a backup for your Air TTL Remote, then this can fit that job. Once you subtract the cost of a second trigger from the price of the A1, it drops down to something very similar to the price of Nikon & Canon’s proprietary speedlights. 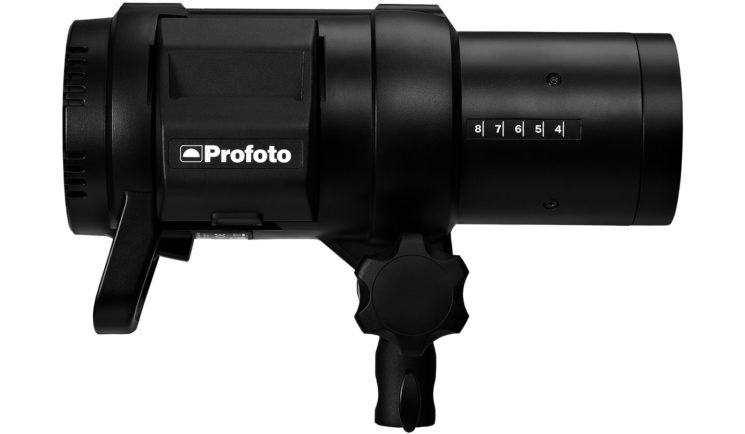 If you’re not already a Profoto shooter, but the idea of a $1,000 speedlight intrugues you, then how about this two light portable location kit? The Profoto B1X 500 AirTTL is no doubt an expnsive light. But, for that money, you’re getting power, reliability and consistency, time after time.

Of course, this kit just contains the lights, batteries, chargesr and a backpack in which to keep them all. It does not include light stands, modifiers, or the Air TTL trigger. Of course, you can always get the A1 speedlight for that and have it pull double duty.

The flash market has simultaneously become both more complicated and a little simpler over the last few years. The companies that are still around are making such a variety of kit with so much capability now, that it can be difficult to know where to begin. But, fewer companies means it’s a lot easier to now get into a system that you know will probably be around for a while.

Bowens have gone bankrupt and disappeared. Yongnuo don’t seem to be able to figure out what they want to do. Other manufacturers are also struggling. While companies such as Paul C Buff, Interfit and Elinchrom are still pushing out some great kit, the two names most commonly talked about are Godox and Profoto. And it’s easy to see why. While aimed at slightly different markets, both produce fantastic kit. And, if you’re not interested in flash, there’s always Spekular.

With cameras, lenses and lighting down, the only thing to figure out now is where to store it all. Keep an eye out for are bags gift guide coming next!