This is an interesting little rant from James Popsys on camera LCDs. Essentially, his question is why don’t all cameras have a fully articulating flippy out LCD? It’s a question I’ve often wondered myself in the past. The lack of one has definitely put me off buying certain cameras, too. But are they really essential in the grand scheme of things?

What makes James’ rant interesting, though, is not necessarily the rant itself, but the response to it. On the surface, his reasoning seems quite logical and his justifications for it existing in cameras across the board are generally the reasons why I prefer flippy out LCDs, too. But they’re not always ideal.

The versatility of the flippy out LCD is obvious for all to see. It lets you position the screen at just about any angle, letting you see what your camera’s seeing no matter in which direction it’s pointed. It also lets you easily protect the LCD when the camera’s not in use by allowing you to unfold it, flip it around and then fold it back in so that it’s covered when rolling around in your camera bag. 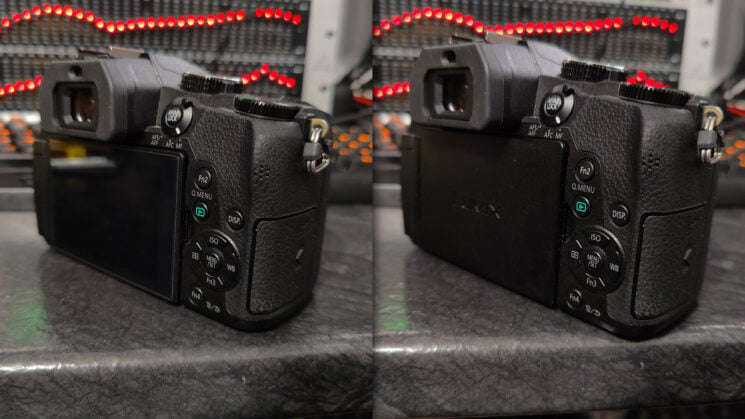 The flippy out LCD offers protection for your screen

But as James mentions in the video, a flippy out LCD isn’t exactly stealthy for things like street photography. When you’ve got it folded out so that you can tilt it to an angle, it essentially doubles the width of your camera – making you stand out more. It can also be difficult to pull it out and get it into the position on certain cameras when used with an L bracket or a cage, meaning that it might as well not articulate at all.

The mainstream alternative to the filppy out LCD is the tilting touchscreen, which manages to deal with those issues. But the tilting touchscreen doesn’t typically offer the versatility of angles that a fully articulating one does. You can either tilt them up or down, but not off to the side. So, if you want to get your camera low to the ground for a portrait orientation shot, that tilting LCD doesn’t really help except in a few rare cases where it tilts in two axes, like the Nikon Z9. Of course, who wants to spend $5.5K on a camera and sit on a 6-9 month waiting list just for a 2-way tilting LCD?

I think Panasonic has hit on probably the best compromise of the two different types of LCD mechanism (tilting vs articulating) with the Panasonic GH6 and S1H, which isn’t just a basic two axis tilt like the Z9, but it’s a one axis tilt along with a regular flippy out LCD, letting you get the best of both worlds. You can see the mechanism explained here on the GH6 by Gordon Laing – it starts at 6:33 if it doesn’t start playing there automatically.

A couple of my cameras do have tilting LCDs and I find them to be less than useful most of the time except for basic travel snapshot stuff. That is to say, it’s about as useful to me as a fixed LCD that doesn’t tilt or move at all. And even when having the tilting LCD is handy, it’s nothing I couldn’t do just as easily with a regular flippy out LCD.

Ultimately, I think the screen type and articulation debate is going to go on for a while. What type of LCD do you prefer? Fixed? Tilting? 2-way tilt? Fully articulated flippy out? Or tilt and flip like the GH6 & S1H?