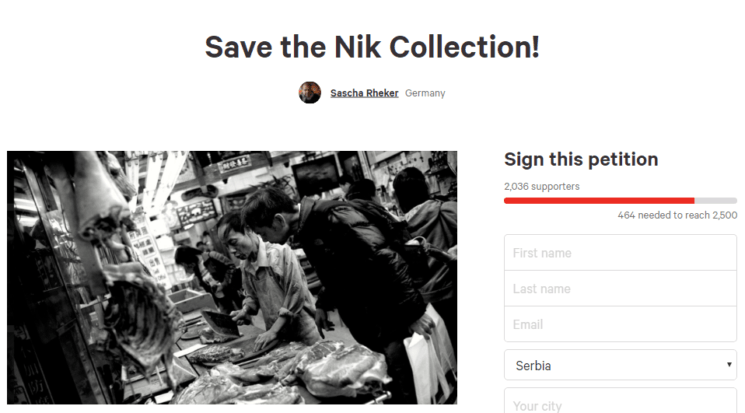 The news that Google abandons Nik Collection affected users all over the world. Over the years, many photographers embraced it as a part of their workflow, and one of such users started a petition to bring the collection back. Sascha Rheker from Germany started the petition on Change.org, in an attempt to make Google go on with developing Nik collection.

Sascha states in the petition:

In 2012, google bought Nik Software,bringing the Nik Collection and the popular photo editing app Snapseed into their portfolio. Snapseed had become one of the most popular photo editing apps in the iTunes App Store. Whereas the Nik Collection was an important tool for photographers, especially for creating black and white photographs from digital files using Nik Silver Efex.

In 2017 google decided to let the Nik Collection die, as they are only interested in the smart phone app snapseed. Photographers who use and depend on it for their work now face a situation, where their ability to continue the work and projects may be destroyed with any new version of OS or applications like Lightroom.

Many people were happy when google dropped the price of the Nik Collection from about $500 to $150 and finally gave it away for free. But now that rather seems to have been a move to ruin any competing software developer.

Today, with no real competitor, photographers depend on the Nik Collection and would have been willing to pay, to be able to keep it. Especially for their important black & white work.

A company like google who claims to contribute to the perservation of mankind’s heritage by scanning millions of books, should although show some responsibility towards the photographic community, as photographs are a part of mankind’s cultural heritage.

Photography is more than an iPhone app!

Personally, I’ve never believed in the power of petitions, but it may be related to the country I live in and the attitude of companies towards the users. Still, companies like Google usually pay more attention to the users’ needs, so maybe there’s a chance of change after all. At the time of writing this, over 2000 users have signed the petition. So, if you believe it could change something and you’d love to bring Nik Collection back, you can sign it here and hope for the best.

[Save the Nik Collection! via DPReview]