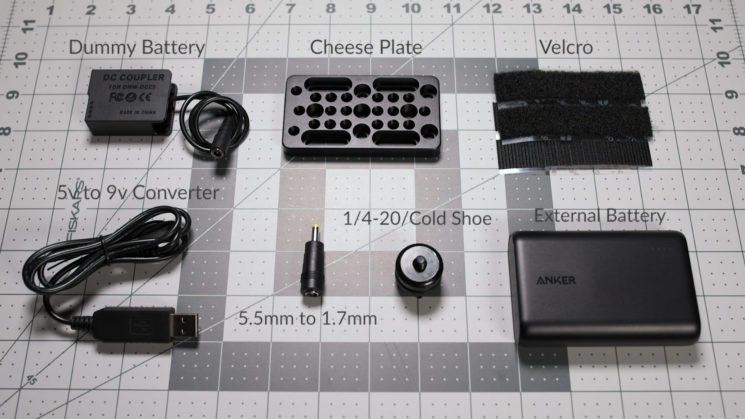 The more features that get packed into each new generation of cameras, the less time batteries seem to last. Things like liveview, gps, WiFi, NFC, VR/IS, and a host of other doohickies just drain them faster than they used to. Even if your camera doesn’t feature superfluous battery draining features, other things can kill them quickly, too. Shooting video or timelapse with long exposures, for example.

The obvious choice is simple. Take a bunch of spare batteries. But what if you want more time without having to worry about interrupting your sequence to swap out a battery? That’s where USB power comes in. This video from David at 30Five Millimeter shows you how you can get USB power with your DSLR or mirrorless camera with just a dummy battery and a $5 cable.

Of course, there are commercial USB power solutions available, too, like the TetherTools Case Relay. This is something we use ourselves when we’re filming at shows.  At Photokina last year, a 20,000mAh Anker battery managed to last us an entire day shooting video with the Sony A7II. Each night, we just topped it back up to full, ready for the next.

But it’s possible to get similar capabilities at a much lower price point. All it requires is a dummy battery, and an inexpensive 5v USB to 9v cable. Do make sure you get one that outputs no more than 9v. A few of those cables go up to 12v, and that will probably fry your camera. While most internal batteries in DSLRs and mirrorless cameras are 7.4v, cameras can usually handle anywhere between 7-9v.

The barrel adapter is down there as a maybe as it really depends on which dummy battery you get. Some will already have the appropriate 5.5mm barrel connector. Others, like the Nikon EP-5B (EN-EL15 dummy battery) will have a proprietary plug. And you’re probably going to have to go at it with a pair of scissors and a soldering iron to get the plug you need.

Essentially, though, there’s not really much to the whole setup. Insert the dummy battery into the camera. Plug the 9v end of the USB cable into the dummy battery, with an adapter if need be. Then plug the other end into the USB battery and you’re good to go.

The SmallRig Cheese Plate, 1/4-20 Cold shoe Adapter and the Velcro is optional but wise. It lets you easily mount the battery on top of your camera, so that you can keep it out of the way.

Skip this bit if you’re not into maths

When this 37Wh of power is converted to 9v, that means 4,111mAh. And that’s assuming 100% conversion efficiency, which isn’t physically possible. 92% efficiency is usually a pretty good benchmark. And the voltage here is being converted twice.

Still, triple the life isn’t to be sniffed at, though. It’s still a great increase over the standard batteries supplied with cameras. And 10,000mAh USB batteries are inexpensive, easy to get hold of, and can be used for so much more than just keeping your camera powered.

On any given location shoot, I have at least 6 USB batteries ranging between 8,000mAh and 12,000mAh with me. Always handy for charging phones and tablets, or powering a WiFi router – you can’t beat having your devices connected to each other in the middle of nowhere sometimes.

It would be nice to leave the extra DSLR batteries at home and just have everything run off USB. So, I’ve already ordered myself a couple of those USB to 9v cables for my existing dummy batteries.

What do you use to prolong your camera’s life when away from power to recharge? Do you just take a bunch of spare camera batteries or do you have another solution?

« Concert photography jobs: how you can make more money by shooting music
The 2017 Karma reviews are coming in – “The second worst drone I’ve ever flown” »