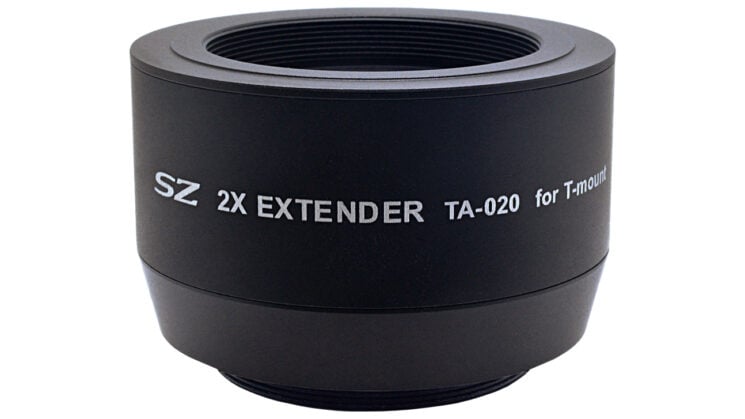 Tokina has today announced its new SZ 2x Extender (TA-020), a T-mount 2x teleconverter for the Tokina SZX Super Tele 400mm f/8 Reflex MF lens released in July 2020. The SZ 2x Extender sits in between the lens and the mount adapter for your camera system – Canon EF, Fujifilm X, Micro 4/3, Nikon F, Nikon Z, or Sony E – and while it’s being marketed specifically with Tokina’s 400mm f/8 – they’ve even launched a new kit bundle that includes the two together – it should hypothetically work with just about any T-mount lens.

The Tokina SZ 2x Extender essentially turns your 400mm f/8 Reflex MF lens into an 800mm lens, but at the cost of aperture. You’ll lose two stops of light – as you do with all 2x teleconverters for any camera system. So, instead of metering f/8, it’ll now meter f/16. 2x teleconverters often play hell with autofocus systems that can’t meter lenses with a maximum aperture this small, but as it’s a manual focus lens, that’s not really much of an issue.

What is potentially an issue, though, is if you’re using it with Nikon F or Canon EF mount DSLRs and using the optical viewfinder to try to see and focus on your subject. For mirrorless cameras, it’s not a big deal, because regardless of your actual exposure settings, you can set the EVF and LCD to automatically expose the scene to brighten things up while composing your shot and manually focusing your lens.

Teleconverters do also lose a little something when it comes to image quality due to the extra glass contained within the teleconverter itself – which is essentially just a magnifying glass – although how much quality you’ll lose with this one remains to be seen. I have to say, I’m kind of curious how that 400mm f/8 and 2x extender combo would work out on my 2x crop Panasonic GH5 for some 4K video with a full-frame equivalent field of view to 1600mm. I might have to put one of these on my shopping list when they become available.

And speaking of which, it doesn’t seem to be available to pre-order anywhere yet (we’ll update this post when we spot some links!) but Tokina has released prices for when it becomes available. The Tokina SZ 2x Extender will cost $99 on its own or you’ll be able to buy the 400mm f/8 Reflex lens and the SZ 2x Extender together for $289 – this does not include a mount adapter for your camera system. If you want the lens & extender kit along with the mount adapter for Canon EF, Fujifilm X, Micro Four Thirds, Nikon F, Nikon Z or Sony E, then that’ll be $299.

For now, you can find out more on the Tokina website.

« Watch this stop motion film made out of over 600 light-painted still images
Lighting setup: Textured fashion lighting with coloured gels »