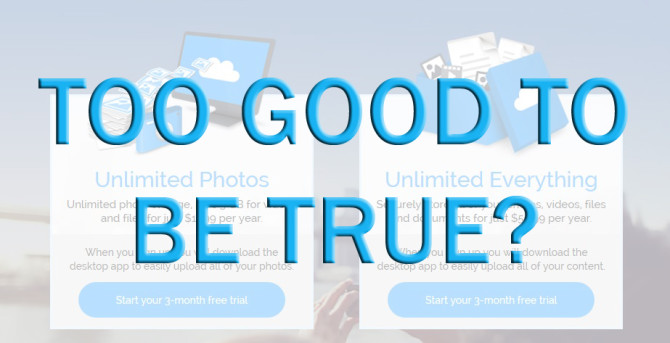 Amazon announced a couple of new Cloud Drive storage plans yesterday, with one of them offering unlimited storage space for photos priced at just $12 a year.

Considering that other cloud services charge up to eight times more for just 1TB, Amazon’s plan seems like it could become a hit among photographers.

On the other hand, a keen reader called Bob pointed out an interesting section in the Terms of Use that might keep photographers away.

Paying just $1.00 a month in exchange for unlimited space for photos, including RAW files, sounds amazing if you’re looking for a simple, cloud-based backup of your photos.

Well, turns out it might be too good to be true for professional photographers. In response to our original post regarding Amazon’s new services, Bob directed us to the following section of the Terms of Use:

1.2 Using Your Files with the Service. You may use the Service only to store, retrieve, manage, and access Your Files for personal, non-commercial purposes using the features and functionality we make available. You may not use the Service to store, transfer or distribute content of or on behalf of third parties, to operate your own file storage application or service, to operate a photography business or other commercial service, or to resell any part of the Service.

The question is, does keeping a backup of one’s commercial photos count as “operating a photography business”?

Perhaps this would be allowed as no money is being made by using Amazon’s service?

Also, how will Amazon differentiate personal and commercial photos belonging to a professional photographer?

We have contacted Amazon with these questions and will be sure to update you once a response is received.

Amazon’s major competitors in the cloud storage market, namely Dropbox, Google and Microsoft, do not seem to impose a similar restriction on using their service commercially (as long as you’re not making money by selling their service, of course).

While going over Amazon’s rules I also found a section stating that the service is offered in the United States and that access may be restricted from other locations.

This could mean that the service is only available to U.S. customers, but also that U.S. customers might not be able to access their storage while travelling overseas.

It is also possible that the relevant clause is mentioned solely for legal reasons, and that the service is actually available all over.

For what it’s worth, I was able to create a trial account using a non-U.S. address and credit card and to add those details to my Cloud Drive account.

I doubt Amazon would allow non-U.S. customers to create a Cloud Drive account, add their address and payment method, reach the final stage before confirming payment and only then be told that the service is only offered in the United States.

Either way, we will update on this matter as well.