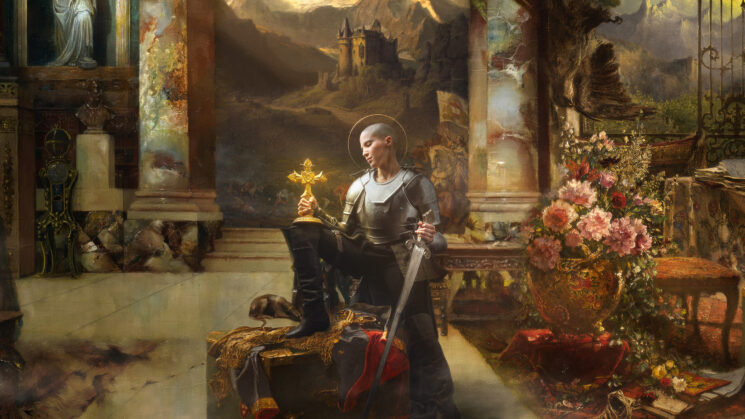 Artificial Intelligence (AI) has been hitting the headlines a lot lately. According to popular opinion, it will likely destroy art, photography, and the creative industries as we know them. But is that the whole story? Perhaps we are missing something here. Surely there is a reverse side to all the doom-mongering?

Well, photographer and digital artist Chris Koeppen may actually have found that silver lining. Chris, who goes under the creative alias of An Ethereal Fire, has been using AI for good instead of, you know, evil. He has been using text prompt AI imaging to enhance his creative output and has recently created this series of extraordinary composite images based upon the legendary Joan of Arc. Chris took the time to chat to DIYP about how he made them and about where he sees the future of photography and AI.

The inspiration behind the series came directly from Chris’ client. “For all of my art, my goal is to combine who my clients are with what they love,” Chris says. “Some clients come to me and say they just want to see themselves as beautiful, and others want to tell a story and express their creativity. Adriana [his client] approached me with a four-scene Joan of Arc story she had created: A call to arms, Warmonger, The Weight of Death, and Life Anew.” That story was then expertly brought to life by Chris. 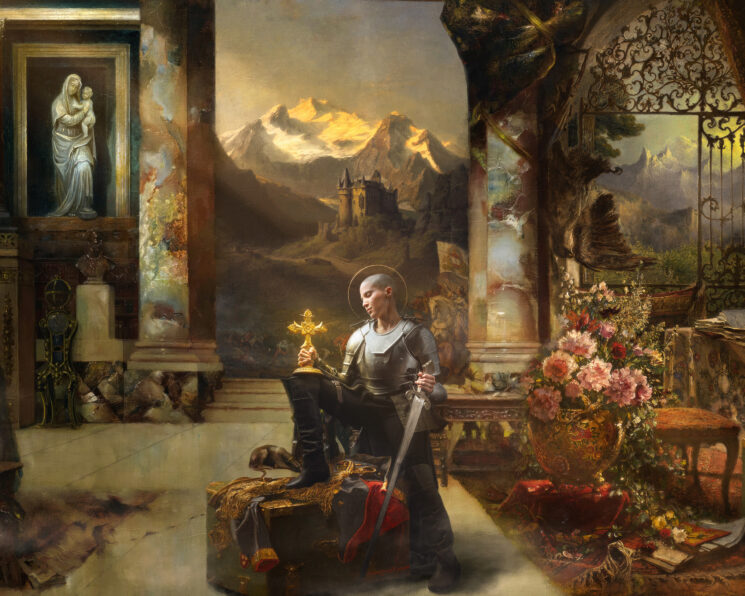 A Call to Arms © An Ethereal Fire

“For each of my clients, we have an in-depth call where I get to learn about them, what they care about, who they are, as well as what they want their shoot to represent,” Chris explains.

The details were left up to Chris to sort out, although they did closely discuss what the overall mood should be. “We nailed down what each image should “feel” like before the shoot,” says Chris, “and during the shoot we focused on posing in a way that would evoke that.” Because Chris had so much creative freedom he was able to develop how the story was told and how it evolved during the shoot. 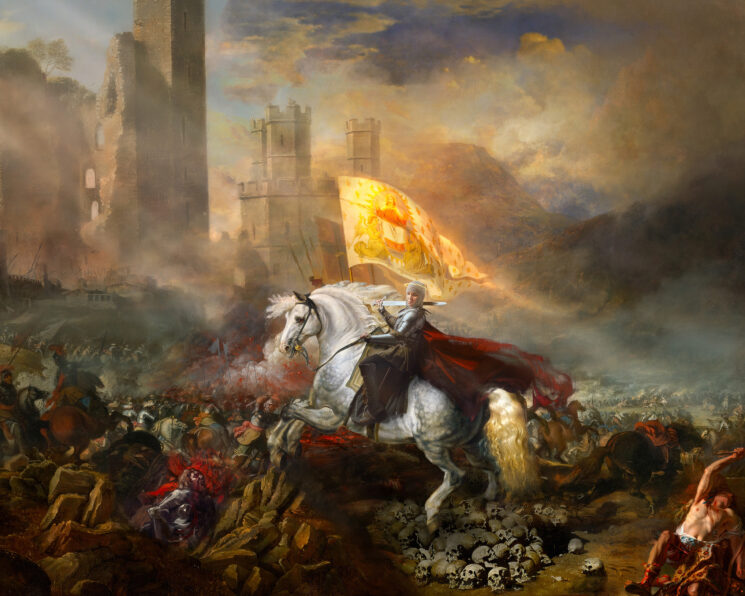 The images were created using a combination of traditional studio photography, Photoshop compositing, and AI image generation. Chris photographed the subject in studio on an all-black backdrop with a strobe in a 70“ parabolic as the light source. 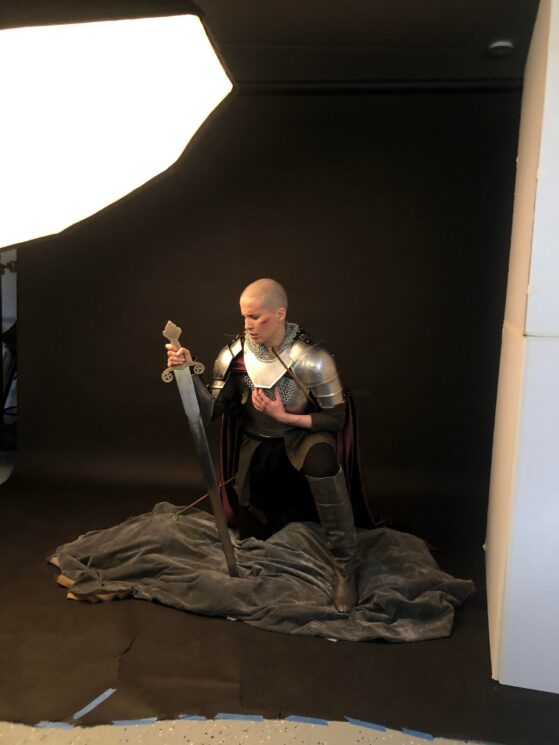 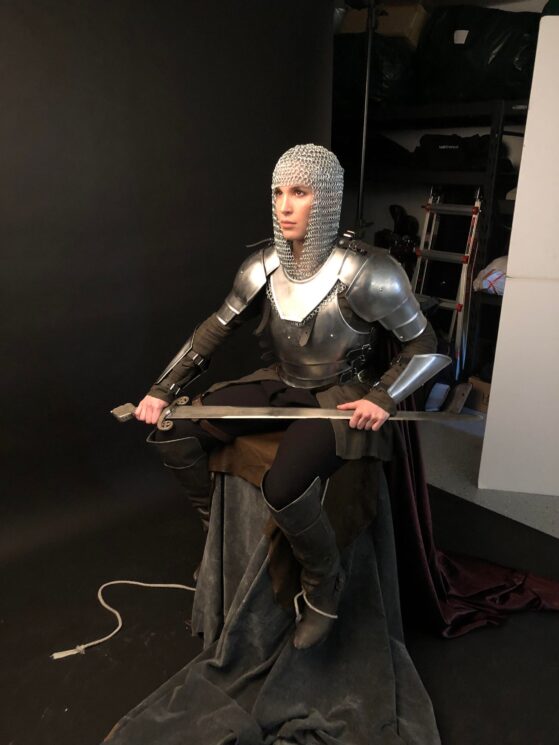 Chris shoots primarily with a Canon 5D Mark IV, and a Rokinon 35 f/1.4mm lens. For lighting, he used an Alien Bee 800, a 70“ Parabolic Umbrella, with a V-Flat for filling shadows. 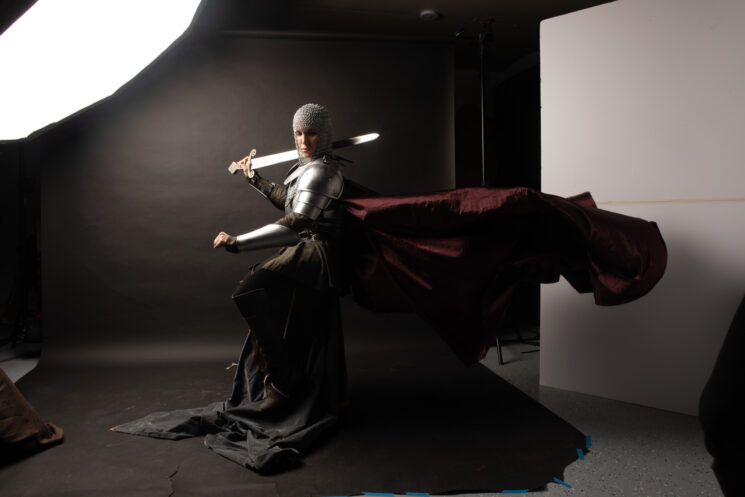 RAW image straight out of camera

AI as a helpful creative tool

After photographing the subject Chris then moved to create the backgrounds. For this, he predominantly used text-to-image generating AI software Midjourney, using carefully defined prompts.

My compositions in these works use anywhere between 6-24 classical paintings blended together to create the environment, combined with digital hand painting to blend everything together. 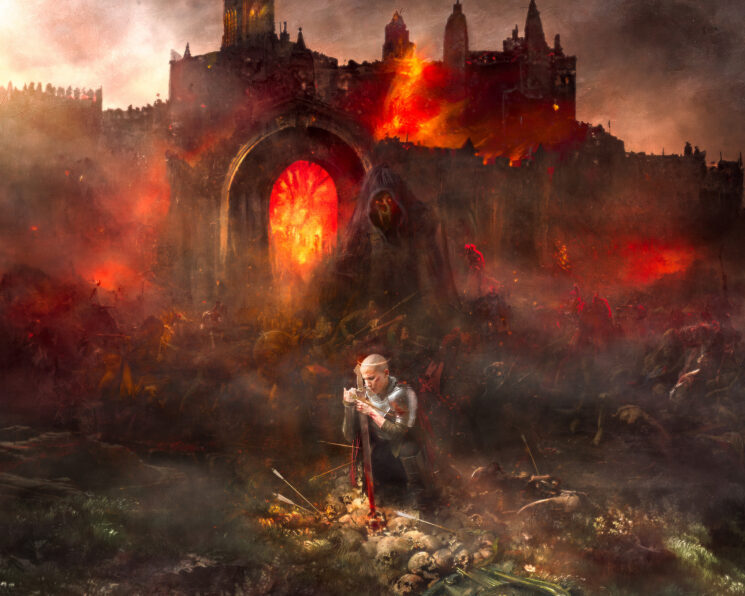 The Weight of Death ©An Ethereal Fire

“The 3rd image in this series, The Weight of Death, is where the AI is primarily used. The foreground and area around the subject are all classical artworks and hand painted, but the farther back towards the castle we get, the more the AI takes over,” says Chris.

The body shape of death, the castle itself, and the hell gate are all AI generations made in Midjourney. They have been upscaled using Gigapixel, overpainted, and then upscaled again ( in order to get the dimensions large enough for the canvas sizes Chris uses (usually around 10,000px on the long edge at 300dpi). Each asset was rendered separately but with similar prompting as the base in order to maintain a somewhat consistent look.

“AI is an incredibly unique new art form that comes with a very intensive discussion on its validity in the art space,” Chris says. “I personally am excited for how it will help artists as a jumping off point, as well as giving people like me the ability to render assets needed for compositing without having to try to find something on a stock site,” he continues.

AI can be an amazing tool, but don’t let it do the speaking for you. Art is so important, and the human element behind it is what gives emotion and life. Integrate AI, but don’t let it consume. Use it as a tool to tell stories and evoke feelings in your audience by blending it with your artistic voice.

“At some point in the future, I’m sure that will bring its own controversy because stock sites are a thriving business structure, and will potentially need to adjust to the idea that many of us are going to not pull from them.” 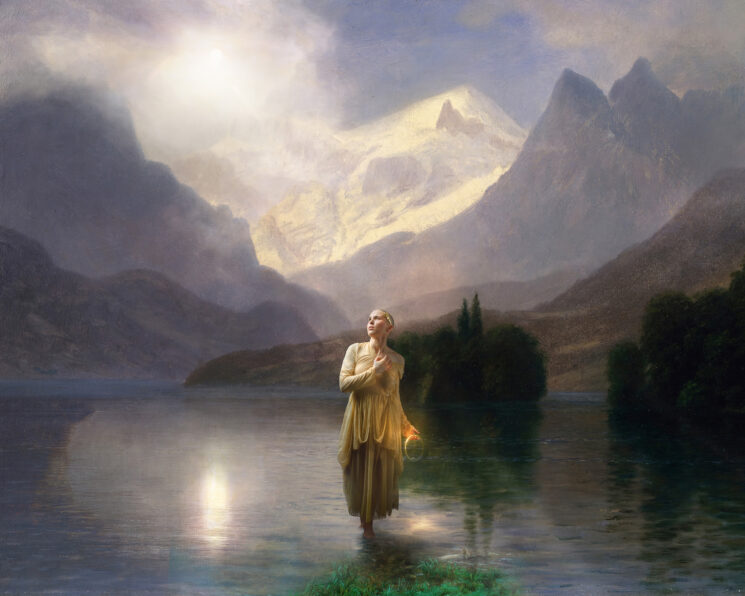 Chris continues to explain that his goal with AI is to use it as a tool in his belt to create better art that may not have been able to be seen before. “I have a deep love and fascination with classical western art,” he says, “but it makes me sad that it didn’t tell stories from people of all genders, races, and sexual orientations. There is such a vast spectrum of unique beauty that we are currently seeing in our world that has existed for much longer than it has been visible in art.

“With AI, I can more easily explore what feudal Japan may have looked like in the style of Albert Bierstadt, or how Lawrence Alma-Tadema may have painted the interior of a Chinese shrine. While these are pretty simple examples, my excitement looks to what will come next as AI learns to interpret old styles even more, and I can use it as a creative tool to tell more stories.”

And it’s this usage and opening of boundaries that is exciting in relation to AI. Now we are able to open up a whole world of visual ideas that couldn’t be realized fully before. Rather than taking work from creatives, AI can actually enhance creative work and open up a realm of possibilities. Sure, there will be copyright issues to hash out, and there will be casualties, but AI is here. It’s not going away.

For anyone wishing to enter the world of AI and incorporate it into their images Chris has some advice:

“Images generated in AI (currently) have a native dpi of 72, so printing the files requires upscaling outside of the original image,” he says. “Before you dive in and generate hundreds of images, have a plan on how you are going to upscale and make them sustainable for clients that want to use these artworks outside of social media.”

“My second piece of advice is that AI can be an amazing tool, but don’t let it do the speaking for you. Art is so important, and the human element behind it is what gives emotion and life. Integrate AI, but don’t let it consume. Use it as a tool to tell stories and evoke feelings in your audience by blending it with your artistic voice.”

I think Chris is completely correct here. Ultimately, we should view AI as yet another tool in the box. For sure, there will be disruptions coming, but change is a constant and we shouldn’t be fearful of it. The future can still involve meaningful artistic endeavors, even if it contains AI.

Chris surely feels this same optimism and says that he feels truly lucky that he has a large and loyal client base who trust him to create art for them. “I get to create art that makes my soul feel at peace for a living,” he says. It really doesn’t get much better than that. Next year will be an exciting year as Chris plans to travel out of LA and take his sessions on tour, to bring his creativity to new people who haven’t had the chance to experience working with him yet.