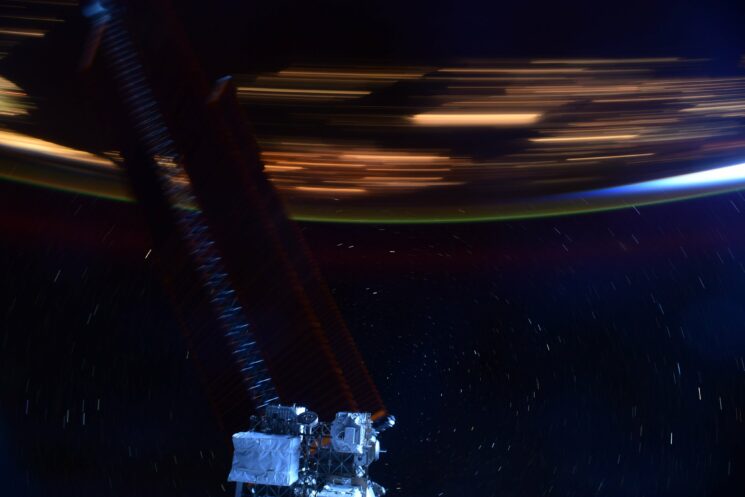 As you may already know, the International Space Station orbits the Earth really fast. For example, if you were to capture its transit in front of the Moon or the Sun, you’d only have around one second to get the shot. But what does that speed look like from up there? With his recent photo, Thomas Pesquet tries to put it in a perspective.

Other than being one of the ISS astronauts, Thomas is also a great photographer. For this particular image, he played with long exposure to try and depict just how fast the ISS moves.

A picture from some tryouts of a photo technique I’ve been experimenting with. It gives the impression of the speed we fly at (28 800 km/h!). This image is one 30-second exposure of Earth at night. The trails you see are stars, and city lights. More to come! ?? #MissionAlpha pic.twitter.com/h2GJScy6mk

The photo you see above was taken at a 30-second exposure. I believe it gives you a sense of speed, but it’s even more stunning when it’s written in numbers. As Thomas explains, the ISS flies at around 28,800 km/h (17895.5 mph). “Our speed is hard to comprehend,” he writes, and I totally agree. For comparison, Thomas adds that the speed of the ISS is around 25 times the speed of sound, or over 70 times faster than a Formula 1 car. “In the 30 seconds this picture was exposed, we travelled 235 km,” he concludes. How crazy is that?

So, if you plan to shoot the ISS transit, remember that it will be gone in a blink of an eye and that you have to plan your shot to the detail. And you need to be fast. Really fast! Make sure to check out more of Thomas’s photos on his Instagram and Twitter.