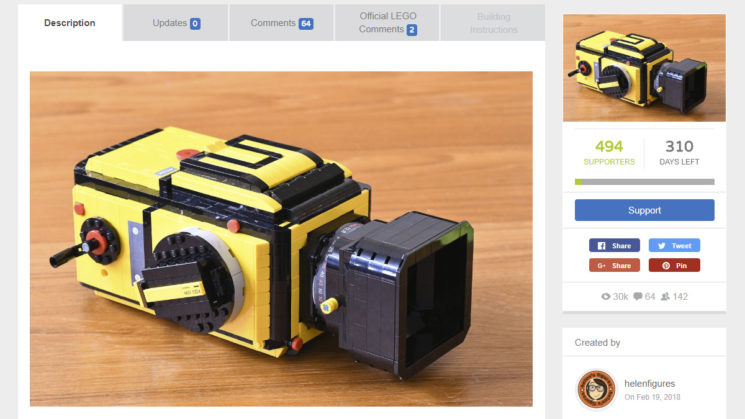 This is going to be a winning combination for many photographers. Cameras and Lego (not Legos). This “Hasselblad 503CX Film Camera“, it may not surprise you to learn, is not actually a camera at all (yet). It’s a lego construction created by Lego user, helenfigures (we’ll just call her Helen from here).

Helen is attempting to convince Lego to turn this into an actual kit. She writes that she is a photographer and that the Hasselblad 503CX is on of her favourite cameras. The camera contains interior parts, just like the real thing, including a mirror so that you can actually see through the lens down the waist level finder.

It also features a realistic feeling shutter button, thanks to a small spring, and even displays a film counter to let you know what shot your on. Obviously, it’s not a real camera, and you can’t actually run film through it and shoot pictures, but the attention to detail is wonderful.

As well as becoming an official Lego kit, Helen hopes to install a tiny digital lens allowing you to actually shoot images with it to your mobile phone.

The project has received a couple of official Lego comments, The first letting her know that the project had been chosen as a Lego Staff Pick. The second congratulating the project on reaching 100 supporters, with an extension to reach 1,000 supporters. The project currently sits at 494, so it still has a long way to go. It will need 10,000 in total in order to be put forward as an official Lego kit. Currently, it has 310 days remaining to hit this target.

So, if you like the idea of having your own Hasselblad Lego camera, why not head over to the project page on the Lego website and show Helen your support!