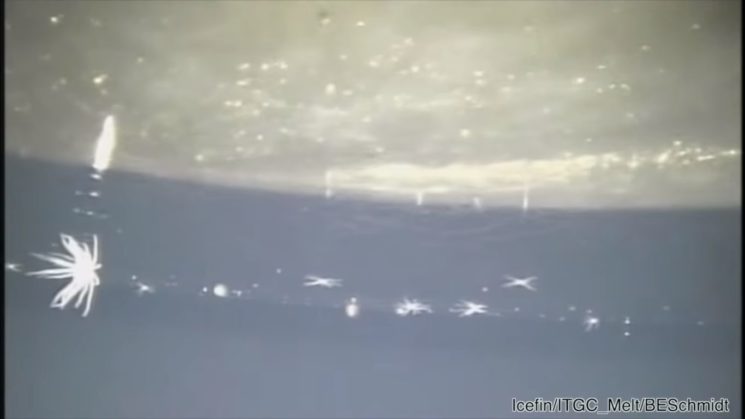 Thwaites Glacier is a huge glacier in Antarctica, often referred to as “Doomsday Glacier.” Why “doomsday?” Well, if it melts away, researchers say that it could raise the sea levels more than 10 feet. This is why it’s important for scientists to understand the behavior of his glacier – and a recent video from Icefin Robot will help them in this mission.

The video was recently published on YouTube, but it’s not only a tool for scientists to study the glacier. It’s also the first-ever video recorder under the ice of Thwaites Glacier, and it’s absolutely mesmerizing to watch.

Thwaites Glacier takes up a huge surface of West Antarctica, with the size of Florida or Great Britain. It’s also one of the most remote and hostile areas, so there haven’t been many people who have laid their foot on it since it was discovered. However, a team of 100 U.S. and UK researchers arrived at the glacier in November 2019 to study it and try to comprehend its “behavior” better. The thing is – the glacier is collapsing.

“Over the past 30 years, the amount of ice flowing out of Thwaites and its neighbouring glaciers has nearly doubled. Already, ice draining from Thwaites into the Amundsen Sea accounts for about four percent of global sea-level rise. A run-away collapse of the glacier would lead to a significant increase in sea levels of around 65cm (25 inches) and scientists want to find out how quickly this could happen.” – The International Thwaites Glacier Collaboration (ITGC)

ITGC writes that scientists and engineers have been working on the glacier for the last two months. As you can probably assume, the conditions haven’t been exactly friendly: the temperatures are below zero and the winds in the area are harsh.

The researchers have used hot water to drill between 300 and 700 m through the ice to the ocean and sediment beneath. They aimed to explore the oceanographic conditions beneath the ice to try and understand the movement and melting of Thwaites Glacier. The Icefin Robot has given scientists the first-ever footage beneath the ice of this area. The video provides scientists with valuable data from deep beneath the glacier at its grounding zone. For us “common folks,” it’s a mesmerizing, one-of-a-kind footage. I personally found it impressive to watch.

“Thwaites Glacier is extremely remote, with only a handful of people setting foot on it until this year. This has been our first season of land-based fieldwork to get a deeper understanding of this important yet under-studied glacier. It’s amazing to think we’ve only now drilled in this remote region some 200 years after the continent was first sighted.”