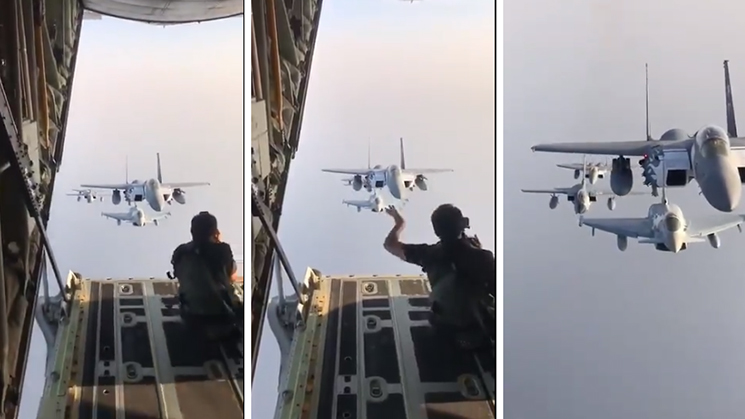 The Royal Saudi Air Force recently organized a photo shoot of its fighter airplanes. But what’s even more interesting is that there are also a few BTS videos. Saudi journalist Enad al-Otaibi recently tweeted them, so you can see what it looks like to photograph fighter jets mid-flight. Spoiler alert: it looks pretty epic.

The photo shoot took place during air show rehearsals during preparations for the 90th National Day of Saudi Arabia. “The eye of the hawk” as Enad refers to the photographer is Ahmed Hader. In the two BTS videos, you can see him strapped in the C-130 Hercules, directing and shooting four fighter planes.

The whole thing reminded me of  Jin-Woo Prensena, a fearless photographer we featured a while ago. He dangles from a helicopter shooting epic landscapes and cityscapes, and of course, he’s also securely strapped in the aircraft. Nevertheless, both his and Ahmed Hader’s jobs seem pretty adrenaline-packed, unusual, and epic.

This drone shrinks mid-flight to squeeze through small spaces