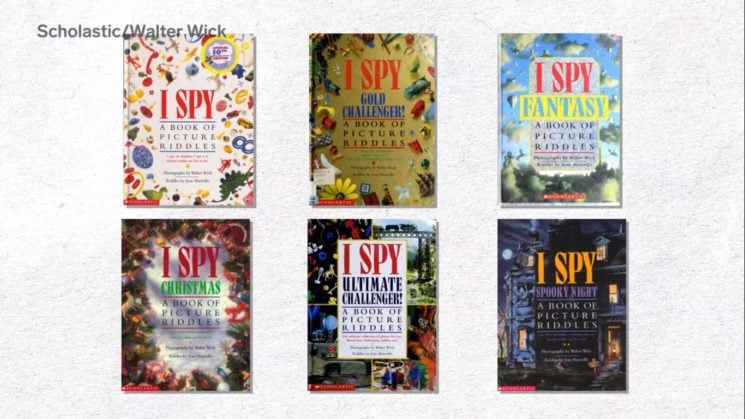 How does it make you feel when someone mentions I Spy books? They were introduced in 1992, and there’s a good chance that either you or your kids read them. But did you know how all those images in the books were created? In this video, Insider introduces Walter Wick, the photographer and photo illustrator behind I Spy books. He will take you behind the scenes and tell you just what it took to create photos for the books you (or your little ones) loved so much.

Before he started working on I Spy, Walter was a commercial photographer in New York City. He started working on I Spy after a series of pretty random events. One day around 1980, he was cleaning up his studio and decided to take a photo of the stray nuts and bolts that were lying around. He used this photo to promote his work, and author Jean Marzollo saw it. She invited Walter to do a poster for her kindergarten magazine Let’s Find Out. Then, an editor of Scholastic Books saw that poster and asked Jean and Walter if they wanted to create a search-and-find children’s book. Jean would write the rhymes, and Walter would create and take photos. And that’s how I Spy was born.

The photos in I Spy books are a fantastic combination of props, sets, and lighting, which makes them look realistic. Walter used a large format film camera at first, which would capture a lot of detail in the photos. He switched to digital around 2004, and he’s now using a Canon 5D. Still, he adds that the camera doesn’t have that much importance, because “it just sits there” while he creates the scenes. And it can take quite long to build a set: from several days to as long as several weeks.

Walter’s studio is full of props which he uses for the sets. He sends the list of hidden objects to Jean so she can work on the rhymes. Every set he makes is carefully arranged around a central topic, such as school, antiques, or nature, to name just a few. Other than I Spy, Walter has also worked on Can You See What I See and Hey, Seymour! They follow the similar search-and-find style of I Spy, and he and his team even built toys from scratch for these ones. He has recently published a science book for kids, A Ray of Light, in which he also used wonderful photos to illustrate the properties of light. I know it’s for kids, but I’d totally buy that one for myself!

So, how has Walter found so much energy and inspiration to create these demanding photos over the years? Well, he says that was surprised from the very beginning with how intensely kids look at his photos. So, he just puts this same intensity into making them. Considering that I Spy books have been so extremely popular, I’d say that this is definitely the right approach.

Wanna start with Photoshop? These are the three books you need to read!

Photobook Collective is a perfect place if you love photography books