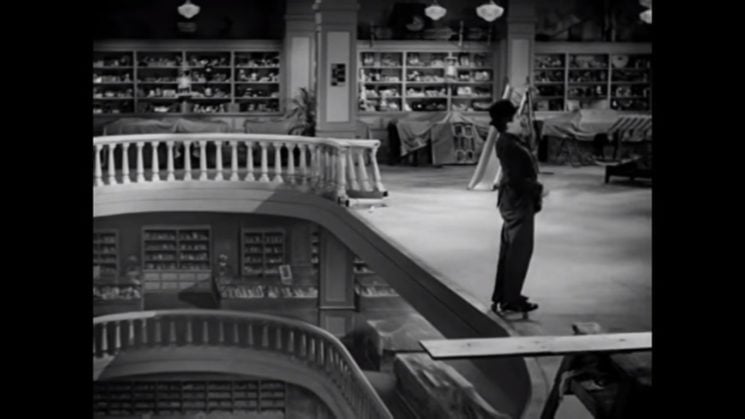 Silent films of the early 20th century had some pretty breathtaking stunts that would be made using a green screen in modern days. Just think of Harold Lloyd’s famous clock scene or Charlie Chaplin’s roller skating scene. Some of the stunts they filmed even seemed quite dangerous, but this video shows that it was, in fact, all a matter of perspective and clever planning.

The video starts with the clock scene from Safety Last. Lloyd looks like he’s clutching the hands of a large clock as he dangles from a skyscraper. It’s terrifying to watch, but the scene was made with a fake wall and a wide-angle lens. Although, it was still filmed on top of a building, and I’m still terrified when I watch it.

You can also see how Chaplin’s iconic roller skating scene from Modern Times was filmed. I’ve always found it unnerving to watch as he skates so close to the edge. However, it actually involved matte painting and a proper camera angle – something that was used back in the day when there were no green screens.

There are scenes from other silent films as well, such as Colleen Moore’s weird eye trick in Ella Cinders or Buster Keaton riding over a broken bridge in Sherlock Jr. Most of the films involved matte painting, camera angles and some clever solutions to keep the cameras positioned where they should be. A scene of Jesus healing lepers in Ben Hur involved two color filters. As they were adjusted, the women’s makeup was no longer visible in the scene, and it looked like magical healing.

The video also reminded me of a short documentary about Star Wars and special effect its makers used back in the ‘70s, so I’ll share it below, too. There were blue screens though, but a lot of effort was put into special effects nevertheless. Still, considering that all the movies from the video above were made almost 100 years ago, I think it’s pretty impressive and clever what they were able to pull off in-camera.

Daredevils Perform Stunts In The Holiest City In The World