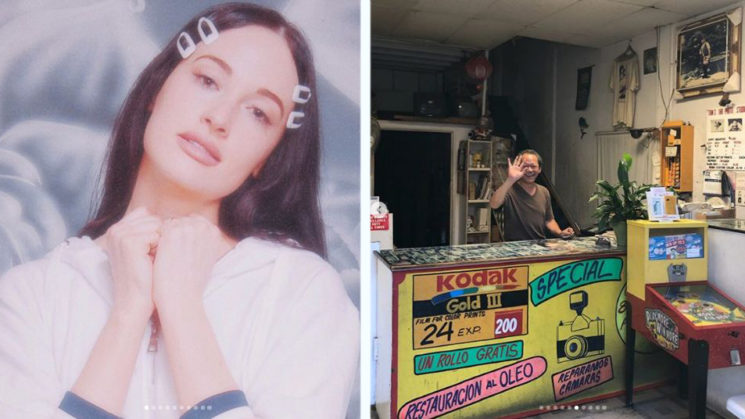 Last week, country star Kacey Musgraves visited Los Angeles where she was scheduled to perform. While searching for a place to develop some film, Kacey and her sister spotted a “hidden gem” in Koreatown: a modest, little photo shop opened back in 1991. The girls were thrilled by the place that looks like a time machine to the ‘90s. But sadly, they learned that the small business has been struggling to survive since the “digital wave.”

This is when Kacey put her popularity to good use. She shared a few photos of the place and made an appreciation Instagram account for it. And practically overnight, the small family business which was on the brink of closing down became insanely popular.

It all started with Kacey’s Instagram post. “Sandwiched between little bodegas, my sister randomly found this place on Beverly Blvd in Korea Town called Tom’s One Hour Photo & Lab,” the singer writes. “It’s one of those rare mom-&-pop gems that has lasted thru trends coming and going and weirdly has come back around again without even realizing it.”

The owner, Tom, develops film and also does nostalgic portrait sessions (which Kacey says are pretty cheap). You can pick your favorite background for a photo session, and Tom made them all himself. The shop receives cash only and he has no internet, just like in the old days.

“He sadly told us his business used to be really busy back in 1991 when he opened but has slowed way down since the digital wave” Kacey explains in the Instagram post. “So, like any good millennials would do we started an appreciation Instagram for him.”

A post shared by K A C E Y (@spaceykacey)

Kacey also tweeted about Tom’s One Hour Photo & Lab, spreading the word to her 814K followers.

?Got my portrait made at this AMAZING little place in Korea Town LA called Tom’s One Hour Photo. It hasn’t changed since he opened in ‘91. It’s cash only & has no internet. Said business has gotten so slow since the digital wave ? so we made him an insta: @tomsonehourphotolab pic.twitter.com/Y2RPmw1aN7

And just like that, a small, hidden photo shop has gained almost 60K followers on Instagram in a few days. According to the Los Angeles Times, Tom hasn’t only been flooded with new followers, but also calls and portrait requests.

A post shared by K A C E Y (@spaceykacey)

As it turned out, the owner’s son Nick is Kacey’s big fan. He saw her post on Instagram and sent her a message to express his gratitude. And in his message, he confirmed that the shop was struggling, but thanks to Kacey and other photography aficionados, they are still alive:

I must admit that I hadn’t heard of Kacey before I stumbled upon this story. But in my defense, country music isn’t really my cup of tea. Still, after listening to a couple of her songs, all I can say is that she has the voice of an angel. And judging from her kind gesture, she has the heart of one, too.

You can hear Kacey’s songs on YouTube, and of course, don’t forget to follow Tom’s One Hour Photo & Lab on Instagram. If the road takes you to L.A., drop by and get some vintage-style portraits. But even if you live far from L.A. (like I do), keep in mind that you can still support small local business in your town by buying from them and spreading the word about them.