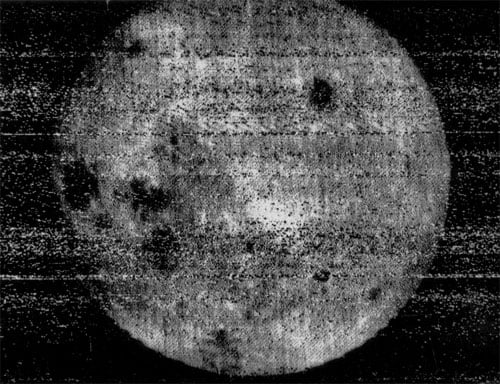 Sometimes real stories go beyond anything we can imagine. And this one from Damn Interesting podcast certainly exceeds any fictionous photography tale one can conceive. It involves espionage, camera coffins, secret film formulas and faxing a photo of the moon.

During the cold war the US initiated a Project Genetrix a secret project executed to gather intel from the closed border USSR. Project Genetrix launched huge 200-foot-tall, 100-foot-wide helium balloons into the air around strategic locations in Europe where the wind was supposed to carry them over the USSR where they will take photos and eventually exit the USSR air space to be collected by a friendly plane, mid air and have the film sent to the US for the intelligence force to decipher. This may sound like a kids play nowadays (and it is), but back in ’56 we did not have no gopros.

Here is one of those huge balloons, carrying the coffin sized camera: 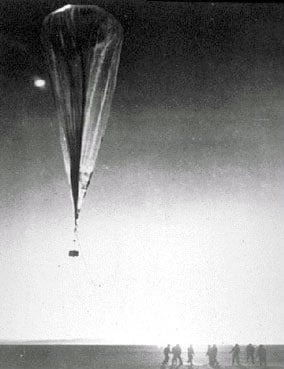 Well, this is only the first phase of this crazy story. Out of the 516 balloons that were launched only 54 were retrieved, with many of the balloons shot down by Mig pilots. (interestingly, they were all shot at dawn when the cold air made them float lower).

But the story does not end there.

Some of those cameras obtained by the Soviets were used in their own space program due to the special film used in those flying coffins. Since the balloons went so high, they had to be radiation proof. Radiation proof film? Just what the Soviets needed to for their far side of the moon Luna 3 project. While they did not know how to make this film, they did know how to remove it from the spying balloons and put it into their own space probe.

But, this was before the age of digital, and the Soviets needed a way to obtain the photos before the probe incinerated in the atmosphere. The solution: develop the film using an automated chamber and “fax” it over to a Soviet reception station using radio waves. (How do you like them apples, Mark Watney?)

The lead image of this post is the first image returned by Luna 3, this is the first far side of the Moon that a human eye witnessed:

For the full story, including why the Genetrix balloons were not as stealthy as they should have been (hint: resonance), the space-film-development chamber operation and other fascinating trivia, listen to the full podcast from Alan Bellows:

[Faxes from the far side | damninteresting, thanks for the tip, Ned]

NASA orders 53 unmodified Nikon D5 cameras, sending some of them to space