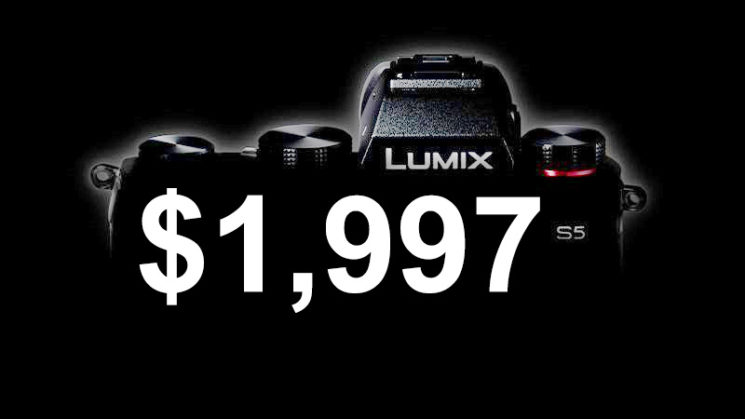 Well, I think this quashes any idea that Panasonic was looking to compete with the Canon EOS RP, Nikon Z5 and whatever Sony has up their sleeve. Nokishita is reporting that the price for the upcoming Panasonic S5 will be $1,997.99 (or $2,297.99 for the S5 kit that includes a lens – although they haven’t stated which lens).

They’ve also leaked the press text for the announcement, which states that the Panasonic S5 has been “designed especially for content creators”. Let’s hope that means it has the flippy out LCD of Panasonic’s Micro Four Thirds cameras, and not the tilting LCD of the other full-frame L mount bodies.

LUMIX S5 full-frame mirrorless camera is designed especially for content creators. Latest advances in image resolution, image stabilization, and autofocus all in this compact camera that is the signature of LUMIX.

Experience extraordinary video recording in 4K 60p, 4:2:2 10-bit. It also offers a Full HD 180fps Slow Motion option as well as 4:3 Anamorphic support. This is what makes S5 perfect for use when taking still photos or as a vlog camera.

The compact nature of the S5 is one of the signature features of the LUMIX series. To make sure that your camera withstands tough field sue, the S5 comes with a dust and splash resistant construction. Optimized heat dispersion ensures a stable, continuous video recording without interruption.

One of the expanded features of LUMIX S5 is the Live View Composite mode which instantly creates a stunning image out of several live shots; the shutter releases at designated intervals of exposure time to merge the bright parts into a single image. Useful for shooting fireworks or a starry sky.

It’s unusual that Panasonic seems to be creating a camera that competes directly with its own Panasonic S1 mirrorless camera – which is also currently listed on Amazon for $1,997.99. Although smaller, the Panasonic S5 looks that it matches the Panasonic S1 in many respects and even beats it in some. You can see the leaked specs here. 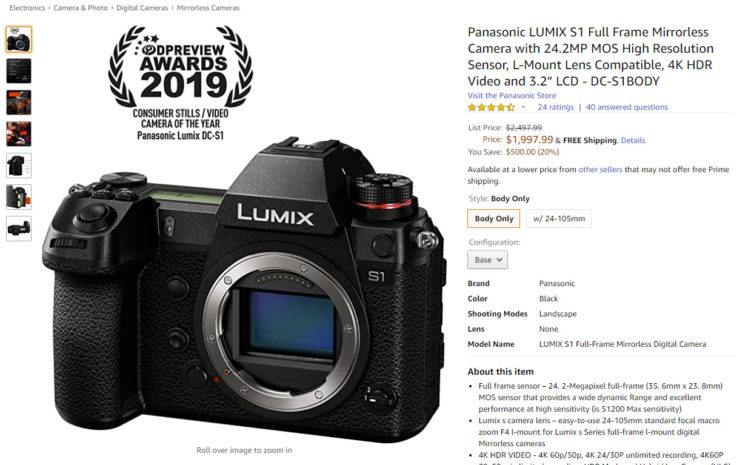 Whether or not we can expect Panasonic to release a true entry-level full-frame camera to compete with Canon, Nikon and soon Sony, remains to be seen. Perhaps they’re worried about cannibalizing Micro Four Thirds sales if somebody can pick up a full-frame L mount mirrorless camera for less than the cost of a GH5 or around the same as a G9.

But then, on-paper the S5 seems to compete directly with Panasonic’s own S1, and those MFT users who want to make the switch to full-frame can easily choose one of the other brands. I mean, it’s not like they have to worry about lens compatibility between MFT and L mount bodies anyway.

So, maybe Panasonic has something else on the way at some point, too.