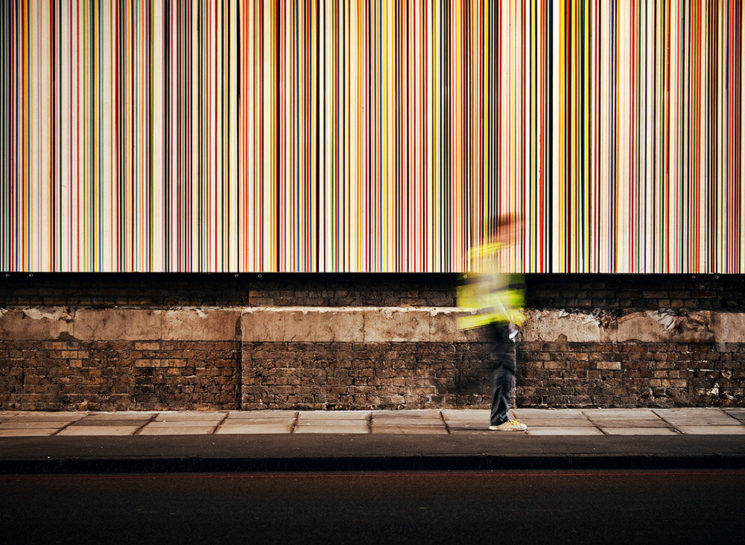 Today I will discuss the importance of background in photography composition illustrated with some examples of mine.

Part of a larger series covering elements of composition in photography for which you’ll find links at the end of this article.

I taught myself photography in quite a specific order, I navigated / progressed through various urban photography genres:

It’s the reason I realised early how important an image’s background really is, allow me to explain:

I took-up photography as I used to have an obsession with graffiti, around 2006. I was like a trainspotter but instead of obsessively shooting trains, I’d hunt for new graffiti art around London which would be cleaned or gone just as fast as that elusive locomotive.

I had to find them.

After exclusively shooting graffiti up-close, photography itself became my passion. I realised I loved graffiti because of how it sat within its surroundings and its environment.

I therefore decided to improve my photography by taking a step back in order for the graffiti to only represent a part of the photo. It felt more relevant and logical. 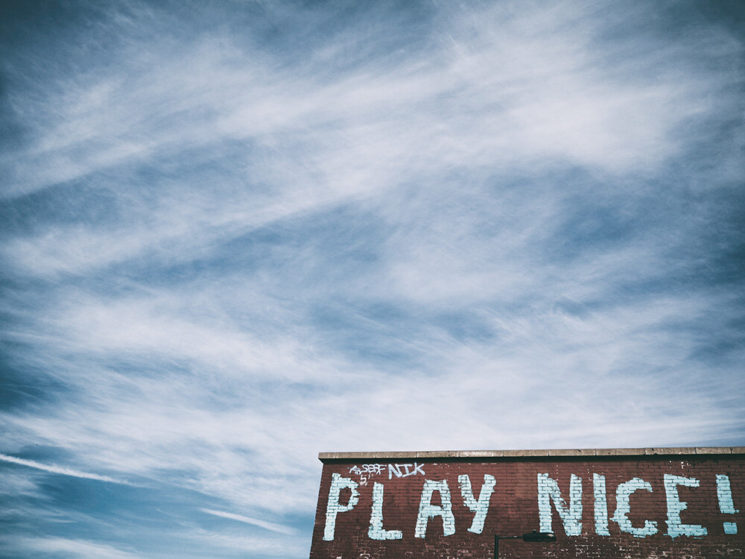 Clouds can make for interesting backgrounds.

I did this for a while and naturally began searching for other types of effective backgrounds, not just graffiti (or skies), for my urban photography such as the lines of shop roller shutters, colourful walls and other textures such as concrete omnipresent in urban settings.

My passion had shifted from graffiti to photography.

How many of you can relate to that? You begin by shooting what you love: graffiti, cars, babies, flowers, insects… and before you know it you are a photographer specialising in that very niche.

The third stage of my photographic development was when I eventually realised that I needed life in my shots to reflect the buzz of the city and so in came people, walking through my pre-composed frames. 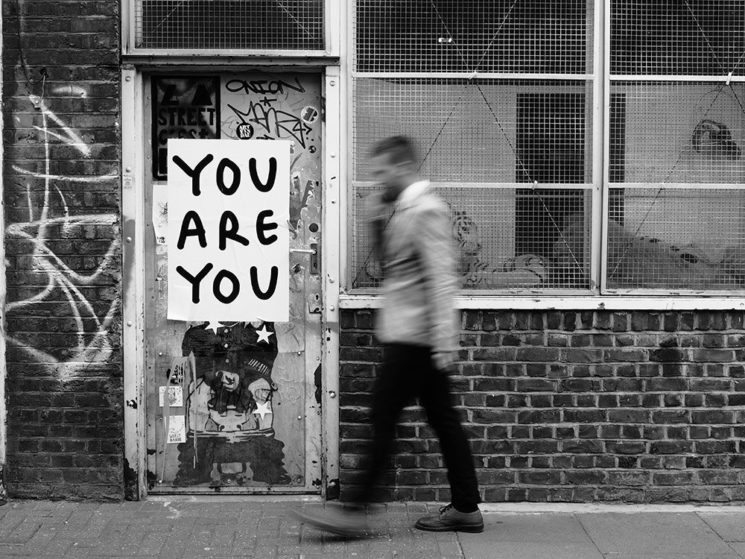 Using these ingredients I now had an urban / street photography recipe I was happy with.

Talking of ingredients and recipes, I’m a trained chef and in fact there are many similarities between cooking food and photography. You mix the right ingredients which you arrange within a composition, in photography it’s the frame, in cookery it’s the plate.

But back to photography…

Focus on a strong background whenever possible and add life or wait for it to present itself, but almost in such a way that the background and what appears to be the subject are equally as important, they balance each other.

Let’s look at some more examples showing the importance of background in photography composition, how they should balance other elements of a photo and their impact on the shot:

In the photo below of St Paul’s Cathedral in London, the building still visible in the background is balanced with the light trails from a double-decker bus which also act as leading lines guiding the viewer’s eye towards the landmark. 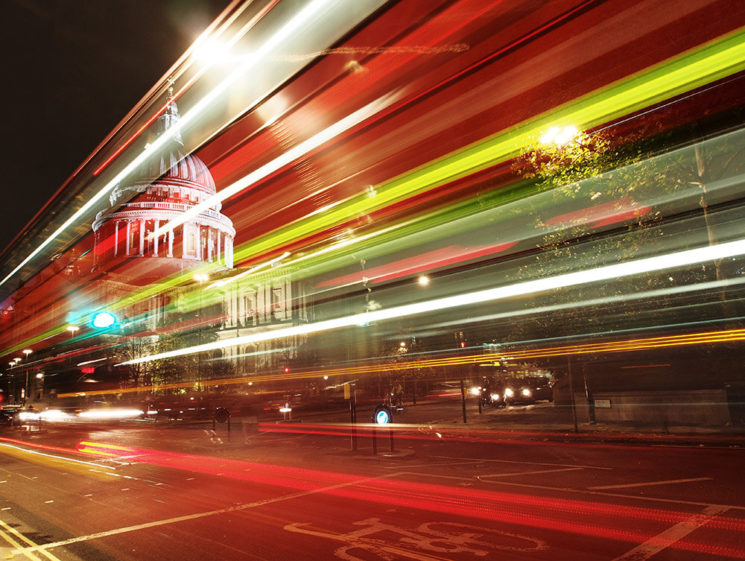 In the next image we have in the background a modern building, The Gherkin, contrasted with a more traditional building in the foreground both in terms of texture and lines. Contrasts between background and foreground are effective composition techniques. 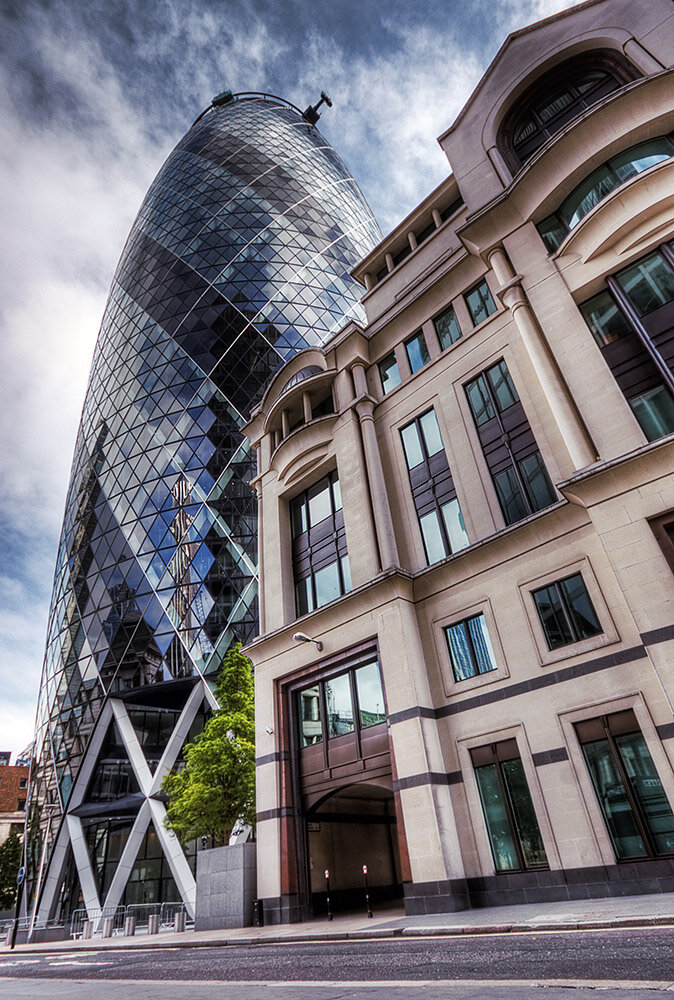 In this photo, taken on the London underground, the background / the character in the middle only represents a minuscule portion of the shot and yet they are key, without it the photo would have absolutely no reason to exist. 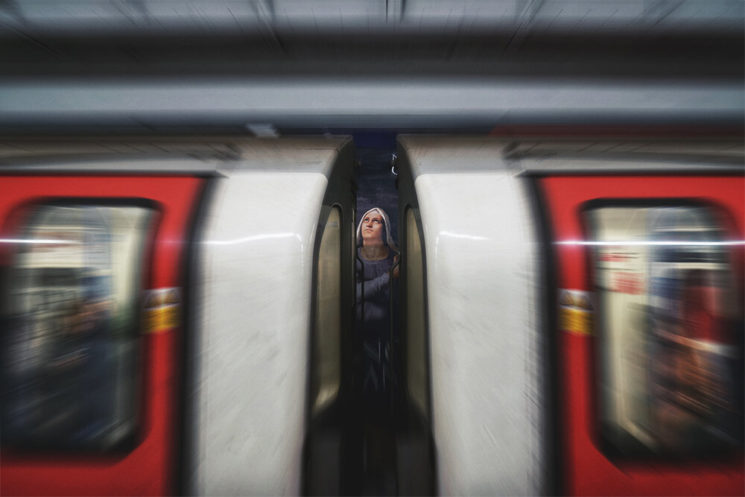 Whereas in this photo below, the background is the main part of the shot with in the foreground only the unrecognisable ghostly figure of a commuter which clearly has freaked out Pharrell Williams, here in the advert. 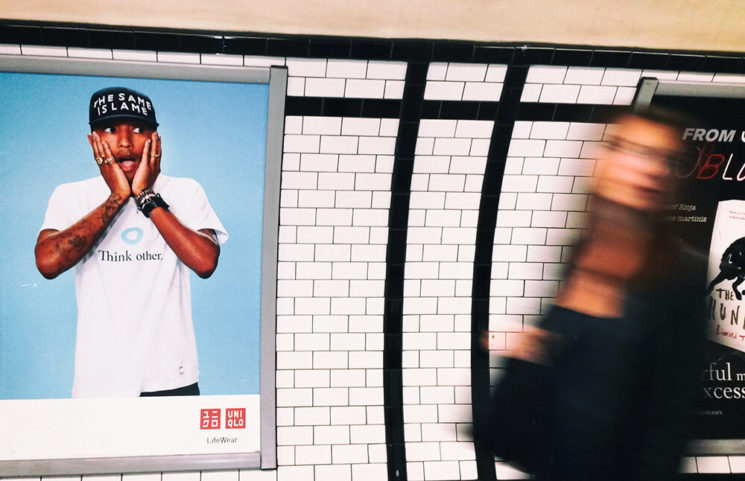 In these two colourful images, I deliberately went for a minimal look, making full use of negative space. I thought these gloriously colourful walls made for a beautifully simple, stripped-down photograph which could be perfect as a framed photo print for an urban interior. 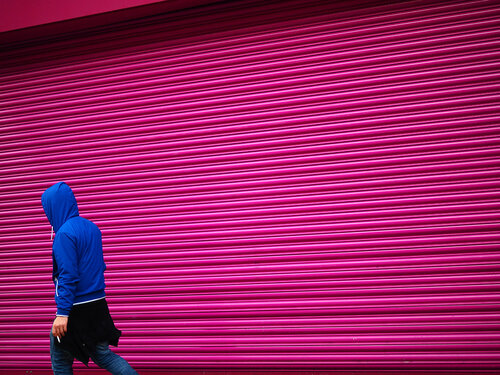 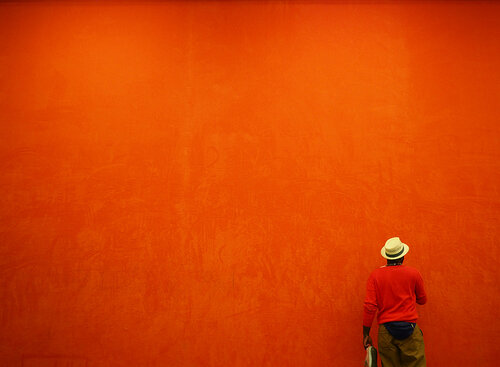 There are many ways to use the right backgrounds your advantage.

Using a wide aperture (low f. number) while focusing on your subject at the front will create a background blur from the shallow depth of field. This blurred background is usually a lot less busy than if it’d been left sharp, it helps the subject you are shooting stand out better. Works great for example with people portraits, animal portraits and botanical photography.

Tip: Next time you head out try the following

Select your background first, frame your shot, maybe from a lower angle or straight on and wait for someone to enter the frame you carefully composed… take that shot. You can either freeze their movement like in the colourful pink shot above or decide to deliberately capture motion with a slightly slower shutter speed such as in this example:

Practise this many times and you’ll end up with some strong images.

Nicholas “Nico” Goodden is a professional London photographer specializing in urban photography, street photography, and attention grabbing micro video content such as cinemagraphs and timelapse. You can see more of his work on his website and say hi on Facebook, Twitter, and Instagram. This article was posted here and shared with permission.

The importance of leading lines in photography

The importance of social skills in street photography