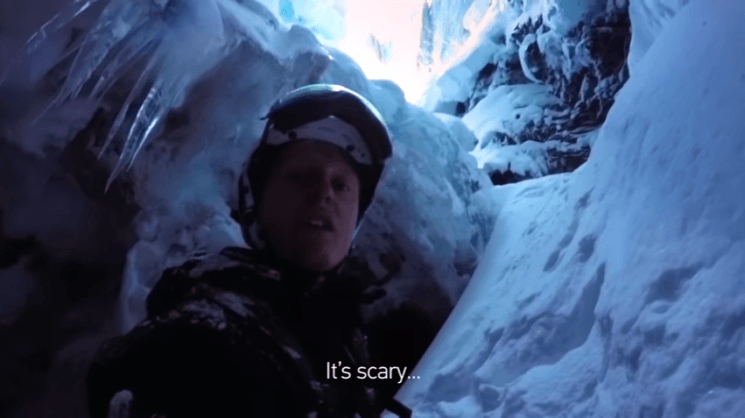 As you could have seen on our blog, action cams sometimes get to capture pretty crazy stuff while people record their sports activities. This time, Jamie Mullner had his GoPro on while he was skiing, and he accidentally captured something that could have ended with severe injuries. He fell into a 60ft deep crevasse, and his camera kept on running and recorded the entire accident and the rescue.

The video shows the skiing that looks like any other, and the guys mention that they’re a bit freaked out by the crevasse at the bottom of the slope. And even though Jamie stays far from it, it appears to be another one hidden under the show – and he falls right in. Fortunately, he stays unhurt. And despite the situation, he manages to stay perfectly calm, which I find really fascinating.

As he tells the rest of the guys what happened, they send over the rescue team. And since the GoPro goes on recording, he uses the opportunity to film the inside of the crevasse, which is quite a fascinating site. At some point, a lot of snow gets inside the hole. But again, Jamie is lucky enough to stay unhurt.

After a while, a helicopter with the rescue team shows up to get him out, and you can even see a part of the rescue in the video. Jamie ends up being out of the crevasse, safe and sound. Despite the shock this must have caused, he was really lucky to end up without injuries. He seems pretty calm in the video, considering the situation, but it must have been pretty stressful nevertheless. After all, sometimes we become aware of what happened only after it’s over. All in all, although he’s created some epic footage, he’ll probably avoid this part of the slope in the future.

GoPro Falls From 3,000 Meters, Found by Mycologist, Returned To Parachutist