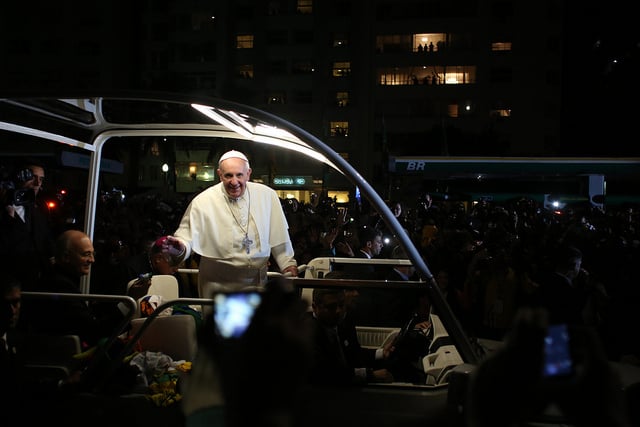 Ammunition, explosives, firearms and selfie sticks will be banned at Papal events in Washington. That’s right, the Secret Service is in charge of securing one of the most high-profile people in the world and it’s the elongated selfie accessory that is keeping them up at night.

Being designated as a National Special Security Event by the Department of Homeland Security, visitors to events and activities planned for Pope Francis’ visit to the capital will have to comply with a lengthy list of security and transportation restrictions, including a ban on the beloved and behated selfie stick.

So, how long before jokes begin about how selfie sticks were created by the devil and anyone using them will go to hell?

Taking the Pope’s visit very seriously, as they should, various law enforcement and public safety agencies, 30 of them to be exact, joined forces to come up with a 12-page document titled “Security Restrictions and Joint Transportation Plan for the visit of Pope Francis to Washington, D.C.“. This document, put together by organizations such as the Secret Service, Attorney’s Office, FEMA, Department of Defense, FBI and Department of Homeland Security, compiled a list of items prohibited from entry into Papal events in Washington D.C.

All the usual items are on the list (aerosols, ammunition, explosives, firearms, hard containers, laser pointers, pepper spray, toy guns, etc), but some unusual items such as balloons and bicycles (and the selfie stick, of course) have also made the list, “as a security precaution”.

Another banned item that photographers attending the events should be aware of is drones. While the Popemobile will keep the Pope safe from any accidental (or not) drone crashes, the guy likes to get out of his armored vehicle so I guess this one makes more sense. Also, can you imagine how many drones would be up in the air had they not been banned? The amount of aerial crashes would be insane.

Now in case you’re one of those people who likes to take risks and thinks he can get away with it, keep in mind that this is the Secret Service and FBI you’re dealing with. This isn’t the local ‘smuggle-anything-you-like’ football or soccer game at your local stadium.

The document also clearly states that “surrendered items will not be returned, or available for pick-up”, so unless you’re trying to get rid of your selfie stick, you should leave it at home. Generally speaking, even when the Pope isn’t in town, it’s a good idea to leave your selfie stick at home.

The same list of prohibited items was circulated ahead of the Papal events in New York and Philadelphia as well, so no shenanigans there either.

Just a couple of days ago the head of the House Homeland Security Committee revealed that the US had ‘disrupted’ a plot against Pope Francis.

“We are monitoring very closely threats against the pope as he comes into the United States,” Rep. Mike McCaul said earlier this week. “We have disrupted one particular case.”

McCaul did not provide any further details, but added that “lone wolf” attacks are being taken into account.

Until told otherwise, and based on the list of banned items, I’m going to assume that the aforementioned “plot” involved a person riding a bicycle with a bunch of balloons tied to the handle bars who wanted to use his selfie stick for a drive-by selfie with the Pope.

While the reason behind the ban are quite different, this is not the first time selfie sticks are being banned. Several museums in the US have already banned them, while some of their European counterparts are considering a similar move.

[via Time | Image by Roman Catholic Archdiocese of Boston]