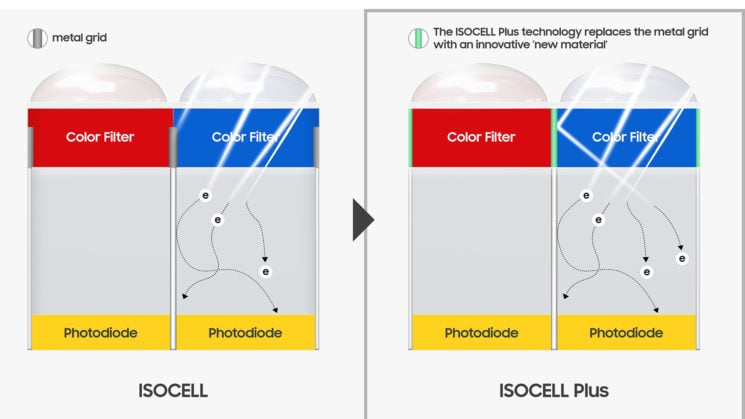 Samsung’s Galaxy S9 family of phones have been rather popular since their release, particularly with regard to their cameras. But despite being near the top of their game, they’re not resting and waiting for the competition to catch up. Announced in 2013, Samsung’s mobile sensors today largely use their ISOCELL technology.

Now, thanks to new material developments from Fujifilm, Samsung have been able to improve this technology to offer more sharpness and colour accuracy, while improving low light performance. They say it will also lead to smaller and higher resolution sensors without any loss in performance.

ISOCELL works by having a metal barrier in between each of the photodiodes (or “pixels”) on the sensor in order to help prevent light spilling over from one to another. ISOCELL Plus replaces this metal barrier with a “new material”.

The new material was developed by Fujifilm. Their partnership with Samsung marks Fuji’s first commercialisation of this new mystery material. Samsung says this will also allow for smaller sensors and increased resolution without any loss in performance.

With the introduction of ISOCELL Plus, Samsung pushes pixel isolation technology to a new level through an optimized pixel architecture. In the existing pixel structure, metal grids are formed over the photodiodes to reduce interference between the pixels, which can also lead to some optical loss as metals tend to reflect and/or absorb the incoming light. For ISOCELL Plus, Samsung replaced the metal barrier with an innovative new material developed by Fujifilm, minimizing optical loss and light reflection.

The new ISOCELL Plus delivers higher color fidelity along with up to a 15-percent enhancement in light sensitivity. The technology also enables image sensors to equip 0.8-micrometer (µm) and smaller-sized pixels without any loss in performance, making it an optimal solution for developing super-resolution cameras with over 20 megapixels.

Samsung have been showcasing the new sensor technology at Mobile World Congress in Shanghai, but there’s been no word yet on when we can expect to see this tech in a production phone.