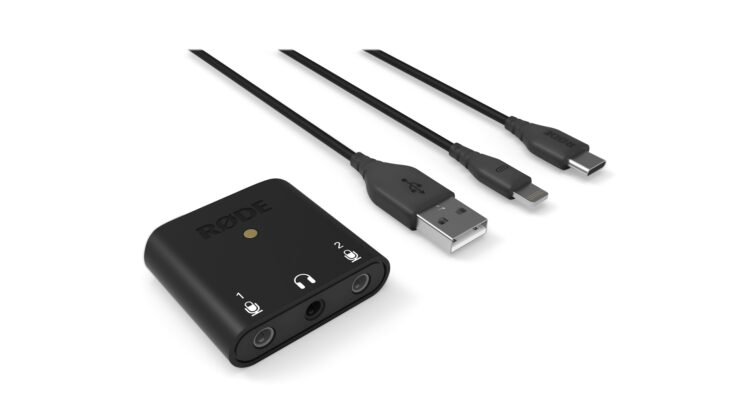 One of the big benefits of both the Rode VideoMic NTG and the Rode Wireless GO II is that you can use them as digital audio devices, plugged straight into a USB port on your computer or the Type-C or Lightning sockets on your smartphones. And this isn’t just the standard analogue pin reassignment like the headphone adapter that comes with your iPhone. It’s true digital audio.

Well, Rode has now put this tech into a new little box called the Rode AI-Micro. Essentially a scaled-down Rode AI-1, it features two auto-sensing inputs, allowing you to plug in up to two TRS or TRRS microphones and then converts it into a digital signal you can send straight into your computer or smartphone to pretty much eliminate preamp hiss.

What is the point of a digital USB audio device? What’s wrong with just plugging straight into the microphone socket of your laptop or the headphone jack cable that came with your smartphone? Well, it’s the same issue we havef with cameras. When you feed them an analogue audio signal, it has to run it through a preamp to get the signal to a level it’s happy with. This introduces noise – commonly heard as an underlying hiss throughout your recording.

And like many DSLRs and mirrorless cameras, smartphones and laptops typically have pretty crappy preamps inside them. Having the signal converted to digital inside the Rode AI-Magic (or taking a straight digital USB feed out from the VideoMic NTG or Wireless GO II) means that you bypass those preamps completely, eliminating any noise they would otherwise generate in your audio.

If you’re a vlogger who uses a smartphone, a live streamer who plugs microphones into the computer’s analogue audio inputs or even if you just want better quality Skype and Zoom calls, this presents a nice step up in quality, providing 24-bit 48Khz digital audio from just about any 3.5mm TRS or TRRS microphone.

If I sound excited about this, it’s because I am. Since I started using the VideoMic NTG as a USB audio source on my computer, it’s pretty much all I’ve used for voiceovers recorded in Audition because it requires so little work in post and no noise reduction to remove hiss at all. It’s a lot less hassle than plugging a phantom-powered XLR shotgun mic into a mixer and then the computer’s line input on the motherboard (which is how I used to do it).

There’s no word on a price or release date yet (we’ll update this post when we find out), but for more info, check out the Rode website.

This handy device turns almost any camera into a webcam