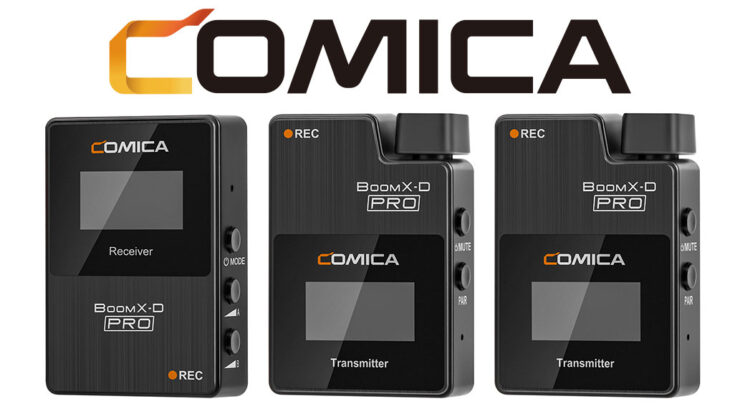 Comica has announced its new Comica BoomX-D Pro wireless microphone system. There are two packages available including one receiver and either one or two transmitters that have a built-in microphone as well as the ability to plug in an external lav – one of which is included in the kit for each of your transmitters.

The BoomX-D Pro microphone system includes a couple of features that so far have only been found in the Rode Wireless GO II. The transmitters have internal storage recording so you don’t need to mess around with easily lost microSD cards and the receiver also has USB connectivity so you can plug it into your computer or smartphone as a digital audio device.

Each of the two transmitters has 8GB of internal storage. This doesn’t sound like much when most of us are using 64GB or larger memory cards these days, but then audio doesn’t exactly take up a lot of space compared to photos and video. 8GB gives you up to 24 hours of recording time. And you can even record when the receiver’s turned off, allowing you to use the transmitter as a tiny field recorder. The transmitters just plug into your computer as USB storage devices like a hard drive or SSD for you to pull the recordings off.

When you are using it wirelessly, though, it operates on 2.4Ghz, meaning that you can use it all over the world without any kind of license requirements, and the kit comes with TRS and TRRS cables for plugging into either a camera or a smartphone. The triple USB charging cable can also be used to plug your receiver into a computer or smartphone as a digital audio input, completely bypassing the preamps your computer or smartphone might contain to eliminate hiss. 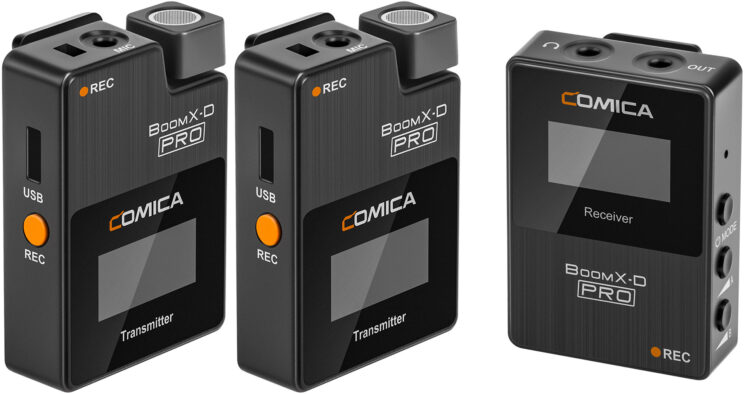 Each transmitter features a locking 3.5mm TRS microphone socket on top, allowing you to plug in an external lav or other wired microphones. A USB socket allows you to charge the devices and a record button allows you to stop and start internal recording. Next to the external mic socket is a built-in microphone that points up towards your mouth when it’s clipped to your shirt, jacket, etc. On the side of the transmitter that you can’t see are power/mute buttons and the pairing button to match it up with a receiver. 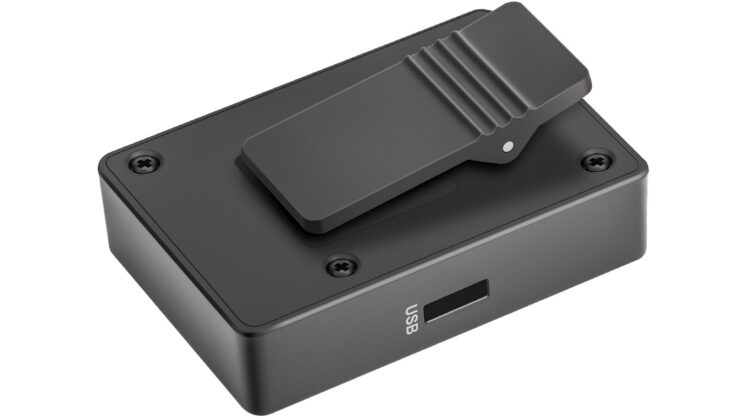 The receiver has two 3.5mm sockets on top. One accepts TRS or TRRS headphones for monitoring the signal and there’s a TRS output that you can connect to your camera or smartphone via one of the supplied TRS or TRRS output cables. There are buttons on the side for power/mod as well as gain adjustment for the two A & B channels. On the other side of the receiver is a lone USB socket for charging or connecting to your computer or smartphone as a digital audio device. 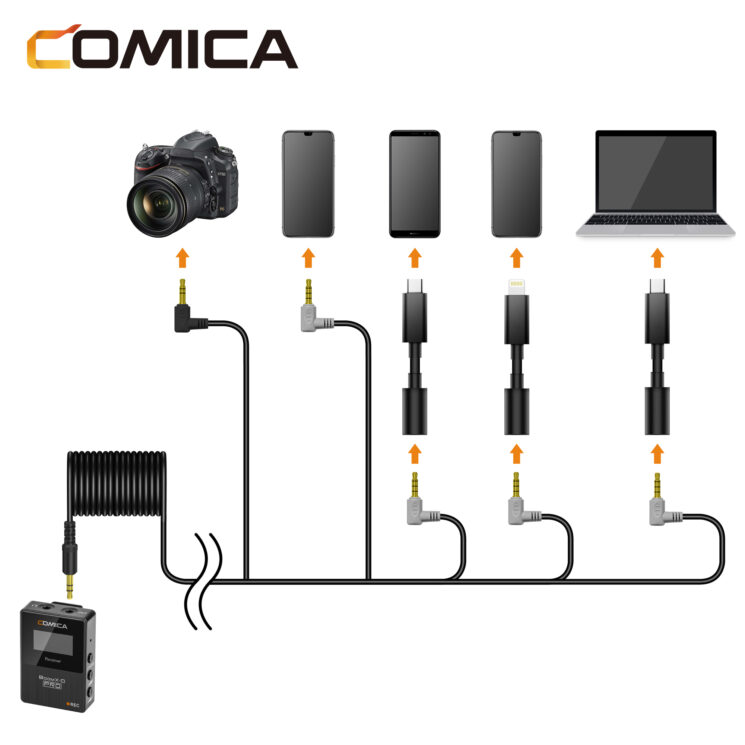 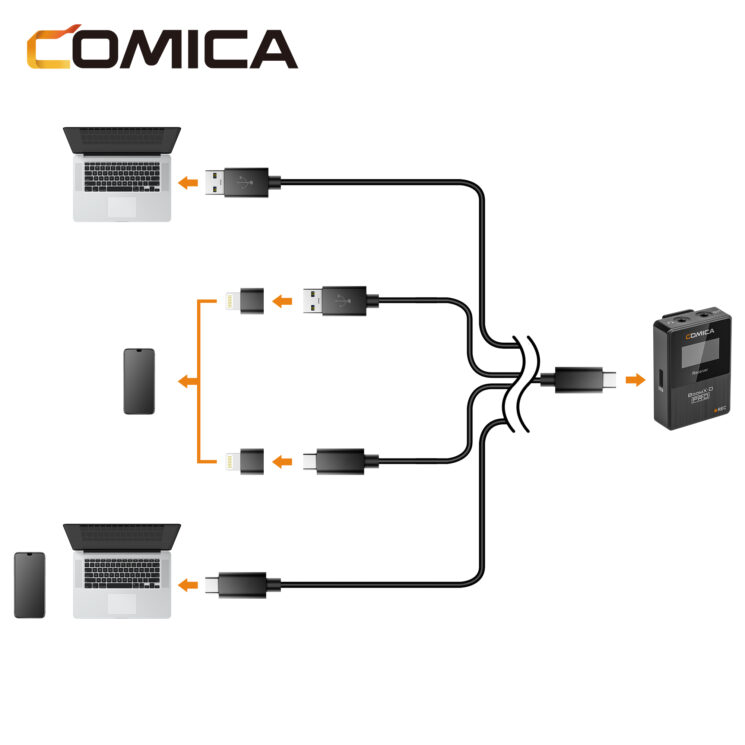 All three units feature built-in clips on the back. The clip on the transmitters is obviously for attaching it to your clothing, but these clips are also just the right width and thickness for you to be able to slide the receiver into your camera’s hotshoe (or a cold shoe if you’ve got your camera in a cage) so that you don’t have to have the receiver randomly dangling down from your camera.

The receiver works in three different modes. You’ve got stereo mode, which allows you to put one transmitter on the left channel and the other on the right. Mono mode puts one or both transmitters onto the same channel. Finally, you’ve got safety mode, which only works with a single receiver. This allows you to record the same transmitter to two channels at different volumes so that if you accidentally clip the audio with too loud of a sound source, you’ve got a -6dB recording on the other channel that you can recover it from. 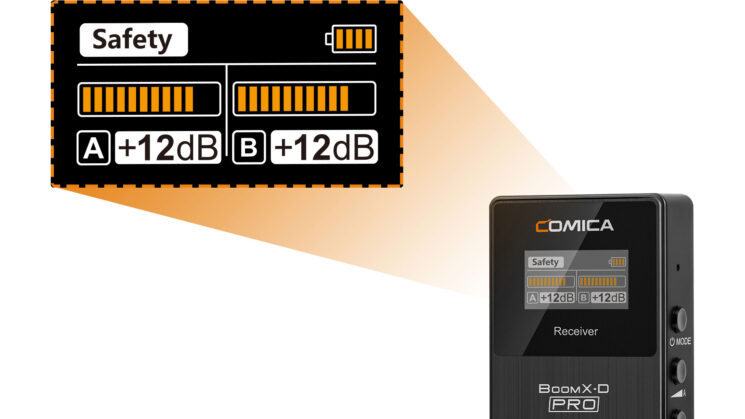 Available in either black or white, the BoomX-D Pro boasts up to 100 metres of range. Of course, this is using the 2.4Ghz frequency. The same as many of our WiFi and other devices these days. So, exactly what kind of range you’ll get will depend on your environment and what other 2.4Ghz devices there are nearby. Outdoors, though, in ideal circumstances, it should go the distance.

If it works as well (and sounds as good) in the real world as it looks on paper, it might be the first microphone to give the Rode Wireless GO II some stiff competition. Other than the Rode, I believe this is the only microphone that features either internal recording in the transmitters without a memory card or digital USB audio output from the receiver beside the Wireless GO II.

The Comica BoomX-D Pro is available to buy now for $269 in either black or white, although it seems that it’s only available through AliExpress at the moment. I expect that at some point, it will be joining the rest of the Comica lineup on the usual sites like Amazon and B&H.