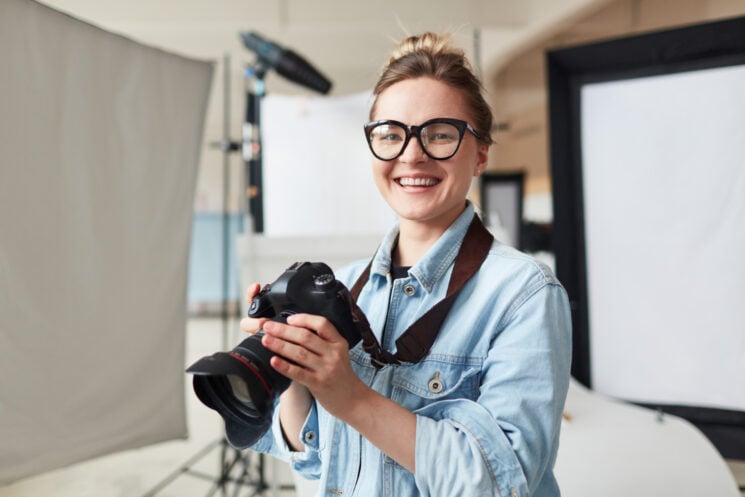 This bias covers the industry as a whole, from day to day work and harassment, to the representation by major camera brands and news outlets. To coincide with International Women’s Day, the marketing company Wallflower Studios commissioned the report titled “Give us Features, not Flowers“. It makes for some interesting and somewhat sobering reading.

So why did Wallflower Studios feel the need to create this report? I mean, gender equality has become such a buzzword in recent years that it’s almost become boring, and women have made massive leaps towards equality, right? Well, not according to this report.

At least in the USA, women photographers (FYI when I say women photographers I mean everyone identifying as women but that’s a lot of words to include so for ease I will continue to just use the words ‘women’ or ‘woman’ or ‘female’) make up almost half of working photographers (49.3% to be precise), according to the US Bureau of Labour Statistics. However, the study has found that most of those women are earning an average of 40% less than their male counterparts. That’s a pretty staggering difference. But it’s not just pay inequality, the report found that women are being severely underrepresented in all areas – commercial projects, publications, awards, exhibitions, and even social media. This has a natural downwards spiralling effect which further compounds the issue.

“Ambassadorships and brand deals are disproportionately given to men,” says Wallflowers. “Whenever a new camera comes out, YouTube gets flooded with camera reviews, but you can find barely any women creators involved in campaigns”.

“Unfortunately, even after being called out, brands fail to rectify the imbalance,” they continue. “Every camera brand out there has at least double, triple, or quadruple the number of male vs female ambassadors, and the representation of women photographers on the brands’ own social media profiles, which you’ll see from our research below, is also lagging behind.”

I actually asked my colleagues at DIYP for their own anecdotal perspective on this. They had to admit that the majority of the people working at the trade shows and for the large brands were in fact all male. The popular photography online magazines also mostly employ male staff, albeit with some exceptions or tokenist female on the team. Here at DIYP, we are a small team, but essentially 50/50 in terms of gender equality, something of which I am proud to be a part.

Camera brands create these programs to promote their products. They invite people respected or up and coming in the industry and it is great exposure for any professional. Unfortunately, many of these ambassador programs continue to support a specific demographic – not the one that reflects society. 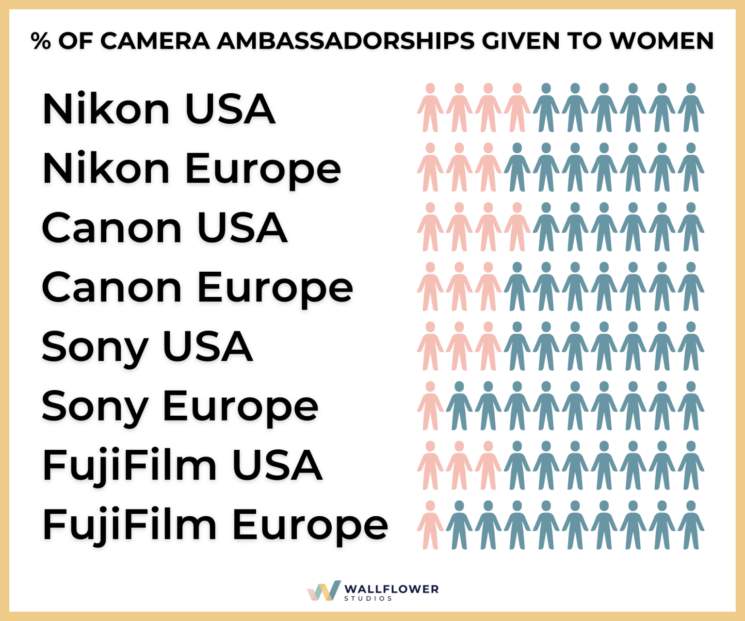 The report states “in 2021, Canon US nominated 12 women photographers out of 38 ambassadors, and this year it is just 14 out of 36. It is even worse for Canon Europe which has 109 ambassadors and only 14 are women.” Additionally, in the Philippines, Canon ambassadors were all men. Nikon Asia announced their new brand ambassadors for their flagship camera and all 32 were men.

The report highlights the rather ironic fact that Canon even wrote a report titled “Why aren’t there more female photojournalists?“. The response? Perhaps there would be if there were more opportunities being offered to deserving female photographers to redress the balance. Additionally, for people of colour, the stats are even more depressing.

One notable exception, however, is Fujifilm Italia, whose entire team is comprised of women. We of course don’t know the details of their hiring mechanisms, but I think I speak for most women when I say that we are not asking for over 50% representation, just a slightly more equal balance. 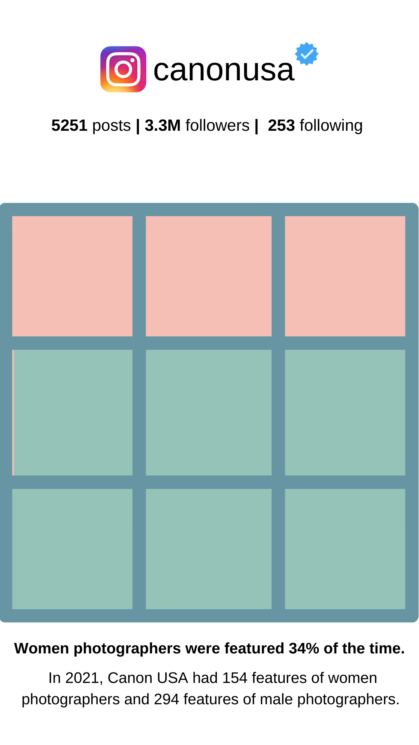 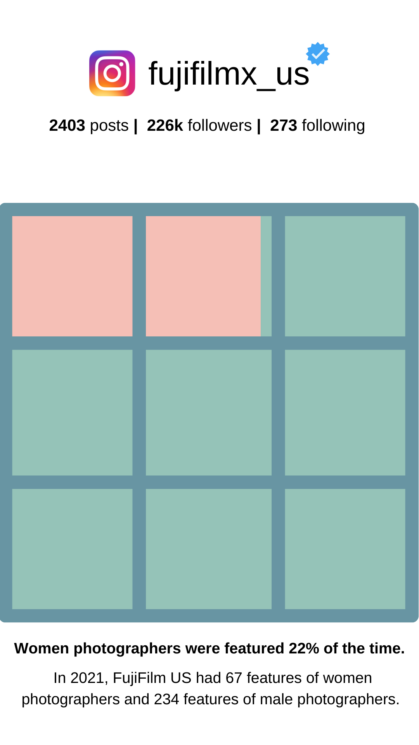 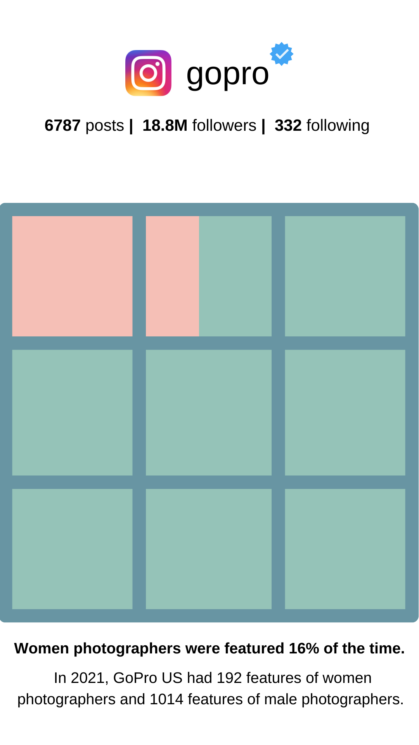 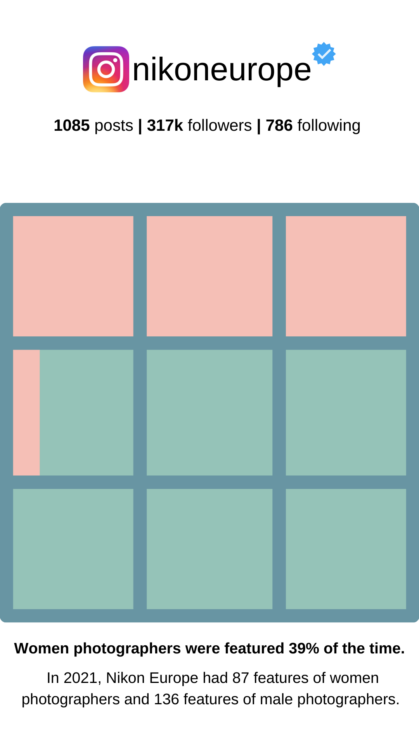 We do need to bear in mind that brands such as GoPro may skew naturally towards male ambassadors purely because of the types of adventure sports they pursue and show. Of course, there are amazing women participating in these sports, however, the percentage of them may be lower. For example, 90% of all base jumpers in the world are actually male, so if GoPro were featuring this type of activity we should naturally expect some kind of gender bias.

And it’s not just the camera brand industry. Surprisingly, In 2019, ‘Women Photograph‘ found that the leading world newspapers were printing far fewer photographs from women than men. They continue to track the representation of women photographers and depressingly their latest data shows that not much has progressed since. 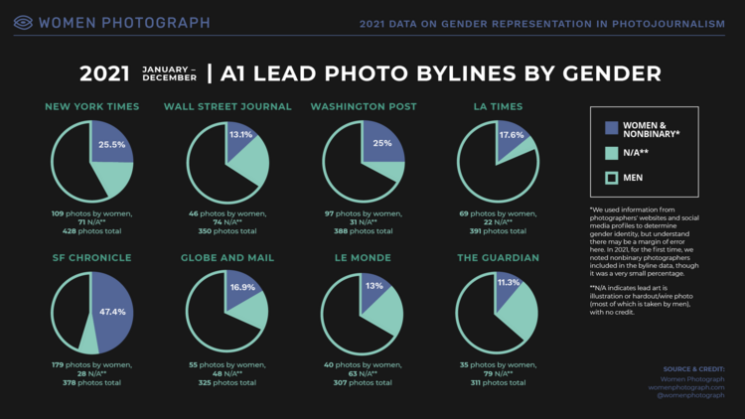 In the workplace, whether it’s the fashion industry or photojournalism, the majority of employees or contracted photographers are overwhelmingly male. Associated Press found that 86% of their photo staff are men. Reuters’ photographers are 80% men. Over the past 60 years, only eight women have received the Pulitzer for feature photography, and six for breaking news photography. And since 1955, the World Press Photography of the Year has gone to only four women. That’s pretty bleak, to be honest.

Similarly, studies of art museums have shown a staggering under-representation of women photographers in their displays and collections. Tate Modern in London for example had just 6% of photographic work by women being shown.

The report also asked women photographers to talk about their own individual experiences, and I must admit much of what they said rings true. I’ve been ‘mansplained’ many a time by older, male amateur photographers who frankly don’t know what they are talking about, which while fairly harmless, can be annoying and frustrating at the best of times. What isn’t so harmless, however, is when it enters harassment territory or blatantly flouts equal rights in the workplace.

Founder of Equal Lens Jaki Jo Hannan has said that some female commercial photographers she had spoken to had turned down work or were made to feel that they couldn’t accept certain jobs because they were still breastfeeding infants at the time, and it wasn’t appropriate or welcome in that environment.

“I see so many women just miss out on jobs all the time and what happens is a lot of the male photographers who get that work go on to get more of it because they have [those jobs] in their portfolio, and it becomes this perpetual cycle that makes the gap wider,”

Coming from working in the classical music world, I must say that I have generally found the photography world much more inclusive. But then I have always had the attitude not to let these things hold me back. If I want to do something, I will find a way.

That being said, it would be really great if talented women photographers were more visible across the board, were paid what they are worth, had access to equal representation by creative outlets and were not made to feel unsafe or unwelcome in the workplace.

As an industry, we can, and should, do better than this. What are your thoughts? Do you think women are fairly represented in the photography community? You can read the entire report here.

« AP accused of profiting from suffering, cancels sale of NFT showing migrants on a boat
Leica Q2 Monochrom gets a “Reporter” look and wants photojournalists to get it »