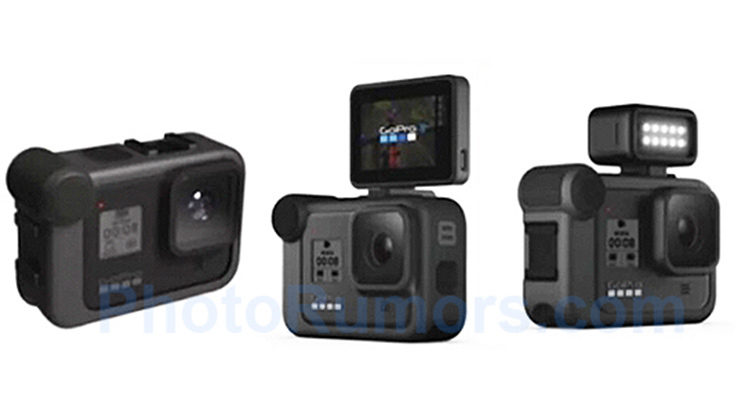 It looks like GoPro has gone with a complete redesign for the new GoPro Hero 8, expected to be announced at some point next month. Leaked photos posted to Photo Rumors show what looks like a rather impressive looking built-in microphone, and even a hotshoe mount for attaching various accessories.

Along with the photos, Photo Rumors also posted some rumoured possible specs for the new camera.

The GoPro Hero 7 was released in September last year and it was pretty impressive. The electronic image stabilisation was much improved over previous generations, allowing you to finally go handheld for a lot of shots and be pretty sure you’d get some decent footage. But then other cameras like the Insta360 ONE X and DJI Osmo Pocket were released, and it quickly started to look a little lacklustre.

Of course, image quality and stabilisation aside, the GoPro fits a particular niche that the other two cameras generally don’t. And that’s action. It’s waterproof and much more durable than many of the products with which it competes. But over the last few years, users needs have changed, and as other non-action segments have drifted towards other cameras, the GoPro has lost ground.

The design shown in the leaked images, though, looks like GoPro is trying to take back those markets. A new design for the Hero 8 had been predicted last month, as the design of the Hero 7 isn’t really any different to that of the Hero 5 released in 2016; a design that’s received a lot of criticism over the last few years.

The new design clearly shows a much bigger microphone, perched atop the corner opposite the camera lens, which should produce dramatically higher quality sound – a complaint about GoPro cameras since day one – and it also appears to have a hotshoe on top, to which you can attach accessories.

So far, the only accessories hinted at are those shown in the image. An LED light, although it’d have to be pretty good to beat out the likes of the Litra Torch 2.0, and an external LCD, which looks like it could be ideal for vloggers, particularly if the stabilisation has been improved even further from the Hero 7. Photo Rumors says that there’s also supposed to be an external microphone that goes into the accessory slot, too. Of course, for vlogging, you wouldn’t be able to use it if you’ve also got the LCD on top.

I’m sure as we get closer to an official announcement, more specs will be leaked and confirmed, along with more pictures. We’ll keep you posted as we hear more.

Do you like this new design, or do you prefer they keep it how it is?