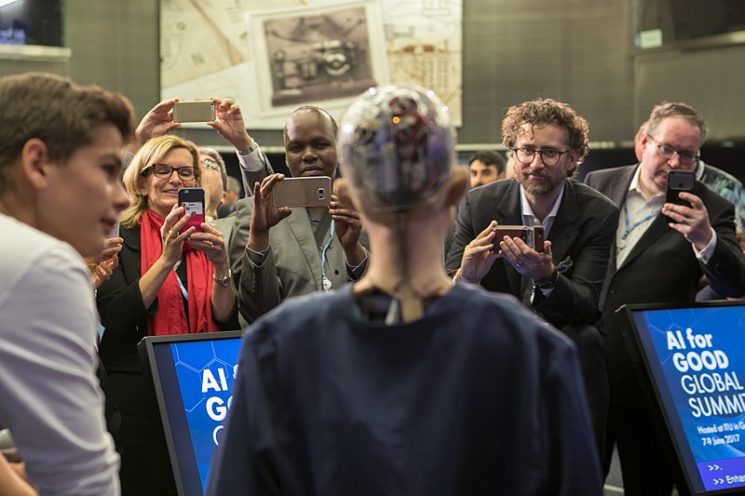 You might well have heard of Sophia, a humanoid robot built by Hong Kong-based company Hanson Robotics. Although she’s not a human, she resembles one in more than just facial features. She interacts with people, she can reportedly recognize faces, and she can mimic 62 human facial expressions. So how do you photograph something (or someone) that so closely resembles a human, yet isn’t actually a real human?

Italian-born photographer Giulio Di Sturco had a chance to take portraits of this humanoid robot and her expressive silicone face. But even more than that: he was granted exclusive permission to explore the story behind Sophia and the lab where she was made.

Sophia was activated in February 2016 and has received a lot of media attention in the past three years. She became the first robot to receive citizenship of any country: in 2017, she became an official citizen of Saudi Arabia.

Di Sturco visited the lab where Sophia was made and he was the first photographer ever to be granted such access. He spent 10 days in the lab, trying to find an unusual angle to Sophia and her story. One of the big dilemmas the photographer faced was whether to represent Sophia as a human or an object. Was he taking a portrait or a photo of an inanimate object?

Sophia uses artificial intelligence, visual data processing, and facial recognition technology. She can mimic human expressions and lead some basic conversations. Di Sturco explains that there were two options open to him. The first was to give Sophia the expression he wanted, then turn her off and make everything perfect. The other was to keep her on and see how she interacted with the camera. He chose the latter.

Di Sturco is a Canon ambassador, and he took these photos with a Canon EOS 5DS R, paired with Canon EF 24-70mm f/2.8L II USM and Canon EF 50mm f/1.2L USM lenses. Even though the photographer treated her as a real human, Sophia didn’t react much to the camera at first. But as time went by and she learned how to pose, she figured it out. So by the end of the shooting period, Sophia smiled at the camera, a moment that Di Sturco describes as “peculiar.” The full story of Di Sturco’s shoot with Sophia is on Canon’s website, and make sure to read it here.

Frankly, I find the existence of a humanoid robot creepy on many levels. For me, it’s like a nightmare come true. And of course, it immediately made me think of Westworld. But, I think that Di Sturco did a fantastic job. He interacted with her as he would with a human – and managed to elicit a human-like response when he pointed the camera at her. It’s amazing as much as it is scary.

This couple hired a robot photographer to shoot their wedding day