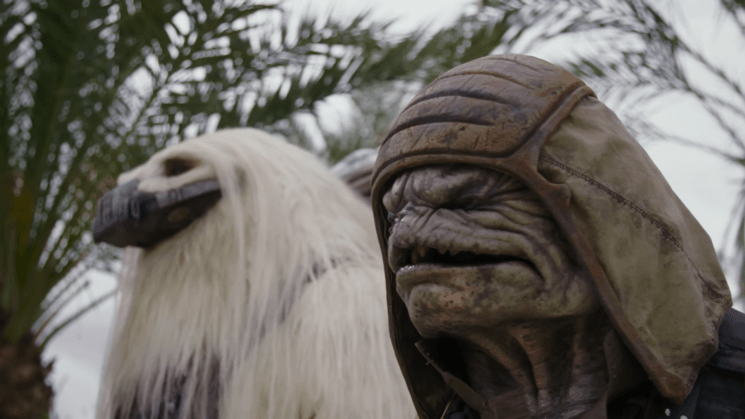 We are only a week away from the official release of Rogue One, and all Star Wars fans are curious to see what the new film will bring. A new featurette shows some behind the scenes moments, and reveals that Gareth Edwards created creatures much closer to the George Lucas’ original vision.

After “The Force Awakens” and its major success, it seems that “Rogue One” will reuse the recipe for creating amazing lifelike creatures. Just like J.J. Abrams, it seems that Gareth Edwards decided to minimize the CGI in favor of practical creatures.

We all know that the original trilogy George Lucas created was not technically perfect. But the practical special effects really added to the atmosphere and made the whole Star Wars world much more believable. Most fans would agree that his later, overly-CGI works, do not have the same charm. He became too interested in the latest technologies and got a bit off track, with overly futuristic creatures, environment and effects. And with the huge CGI world, we were left with little story.

Fortunately (or not), the future we have all been imagining has come, but it it’s a bit different from the vision of the 70’s artists. It’s not shiny, polished and technically perfect. It’s much darker and more industrial.  Therefore, even in the era where technology is truly advanced, the Rogue One director has decided to go back to the roots and use practical effects. This is not because of the tight budget, but because of creating a more realistic and believable Star Wars universe. And we are happy to see that Star Wars is going back on track!

« Tearing down the $2,200 Nikon 105mm f/1.4
Tim Tadder answers the questions you didn’t know you needed to ask about the photography business »