The resurgence in film’s popularity in the last few years has been a wonderful thing.  Large format photography is only just starting to see the the kind of reawakening that 35mm experienced, but it is definitely making a comeback.

For those that are already shooting 4×5, your life might be about to get a little easier (although it may not once you realise the cost).  The newly announced Pentax Film Duplicator 4×5 lets you digitise your film from 35mm up to 4×5 negatives using a simple DSLR. 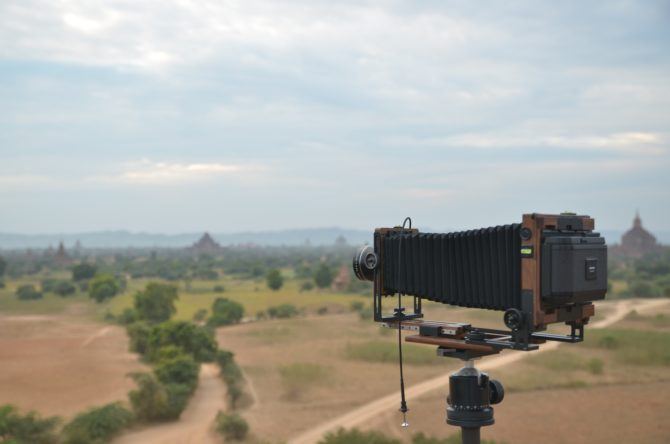 Obviously, one is limited to the resolution of their camera.  If you’re shooting a 50MP Canon 5Ds, you’re going to be able to get bigger prints and more detail than a nine year old 12MP Nikon D300.

I still don’t think it would produce the kind of images you might expect from a dedicated film scanner, like the Epson Perfection V850, and certainly not a drum scanner, but it’s probably going to be good enough for most purposes.

If you’re only ever going to be scanning your film to post online and not make big detailed digital prints, this could be the perfect solution. It’s why 35mm slide duplicators have also become popular again.

It’s certainly much quicker than scanning in film, dealing with ridiculously huge files, only to scale them down to a couple of thousand pixels across for the web.

I wouldn’t get too, excited, though.  No price has yet been announced, but the previous version of the Film Duplicator, which accepts 35mm and medium format film up to 6×9 format costs a whopping £799 through Ricoh’s UK online store.

If you’re only shooting 35mm, there are many other options out there better suited to most wallets, such as Polaroid’s 35mm slide duplicator.  If you’re shooting 4×5, you might be better just using a copy stand and lightbox.

Still, after film’s brief demise, seeing the two working together side by side today shows that neither medium is “better” than the other.  Just different.

I know no price has been announced, but given the cost of the medium format version of this film duplicator, I can’t imagine it’ll be inexpensive.

Do you own the medium format Pentax film duplicator?  Was it worth it?  Or did you think “screw that” and came up with your own DIY option?  Let us know and tell us your thoughts in the comments.

FilmToaster lets you use your DSLR to digitize film photos