Ok – so maybe its not really a weird trick – but unlike a lot of internet headlines, we’re actually going to give you some great tips for taking really cool photos of kids with sparklers on the 4th of July. 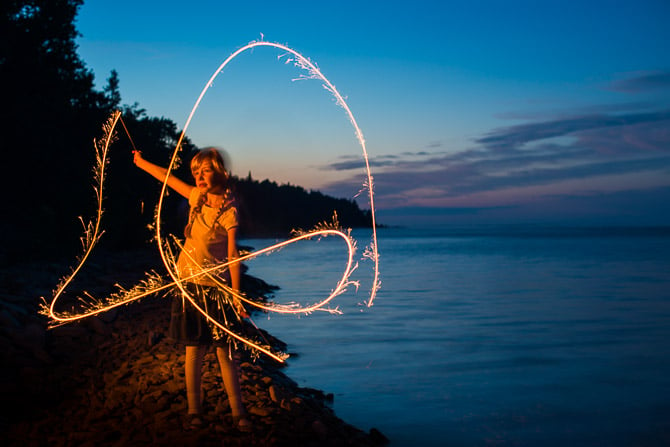 But now that your curiosity is piqued, you know you just have to continue reading to find out what the trick is!

As much as we all like to pretend that a mobile phone can take great photos – for the greatest sparkler photos in the world you actually need a real camera for this technique…ie. a camera with a hot shoe or a sync port.

Now that most real cameras can take photos in the dark – for the greatest sparkler photos in the world you have to go a little old school and pull out that dusty tripod from your grandfather’s basement.

This is the special sauce – to take sparkler photos with both motion blur of the sparklers in action and a visible subject, you have to have an off camera flash.  It doesn’t matter how you trigger your flash, you can use a simple sync cable, wireless radio triggers (I used Cactus V6 radio triggers) or your camera’s built in wireless triggering system – but one way or another you need to get your flash off of your camera.

You don’t absolutely need to gel your off camera strobes, but to mimic the look of the ambient light coming from the sparklers a double CTO gel does the trick.

There is a lot of trial and error involved in this technique, so it helps to have a lot of sparklers ready to go.  Plus, its just a lot of fun to play around waving sparklers on Independence Day.

But you have to be prepared, you will only have a window of 15 – 20 minutes between when the twilight ambient is too bright and overpowers the sparklers and when the light level drops to night time darkness.

Or, you can wait until full night, but then you loose the background.

Next, frame the scene and set up your camera on a tripod.

Set your exposure for the sparklers and let the light come to you.  For photos of sparklers, you want a shutter speed of at least a half second in order to capture the light streaks from the sparklers.

In this photo, my camera is set to 1/2 second shutter speed, f/2.8, ISO100.  If you want a really blue sky, set your white balance to tungsten, or you can just leave it on auto. 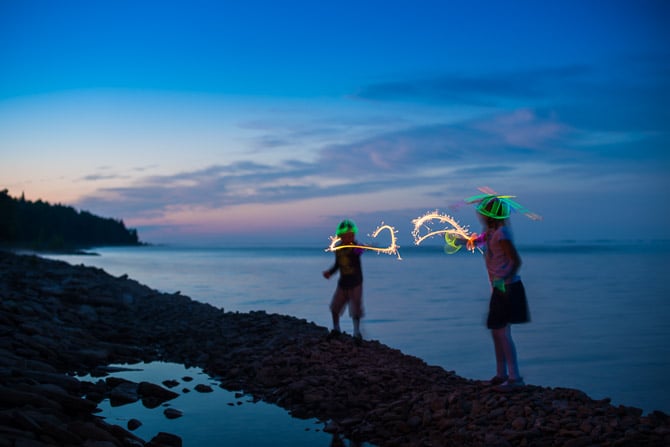 (On a side note – is anyone else amazed that sparklers are still legal?  Give two kids a hot stick shooting sparks and what is their first instinct?  Hey, lets have a sword fight – nothing could go wrong with that!)

Now here is where the trick comes in.

Set up your off camera flash with two CTO gels.

As you can see in the first photo, with a half second exposure, our subjects are just a blur.  With the flash, we are still going to expose our photo for the sparklers, but we are going to use the flash to freeze the action so that we can see the features of our subject.  The resulting photo will look like this: 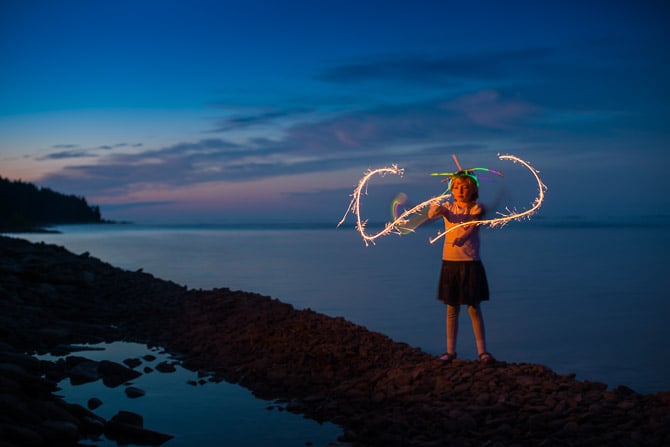 This photo was taken with the exact same settings as the first – 1/2 second shutter speed, f/2.8, ISO100, except an off camera flash was used to freeze the features of my subject.

The goal here is to mimic the orange glow from the sparklers which is why we are using a strobe with a double CTO gel.

In this photo, my off camera flash (a Nikon SB-800) is set about 10-15 feet away from my subject to camera left and set to 1/16 power.  I only wanted the flash to light the subject and not the rocks or the background, so I zoomed the flash head in as much as it would go and asked my voice activated light stand (my wife who was holding the flash), to shield the light from hitting the ground by blocking the light spill with her hand.

Now that you have the camera and strobe set up, you can play around by varying your shutter speed for different effects with the sparklers.

For example, in this photo, I increased the shutter speed to 1 second which shows a lot more light trails from the sparklers. 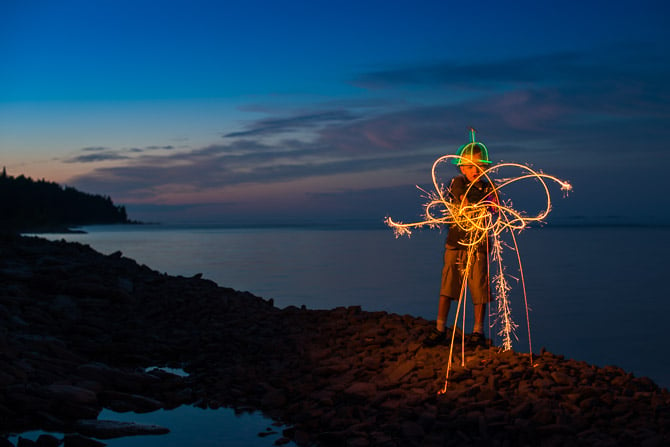 However, to keep the background exposure the same, I also had to decrease the aperture by one stop to f/4.0 and increase the power on the flash to 1/8th.

In the next photo, I increased the shutter speed to 3 seconds – and you can see that the effect changes again. 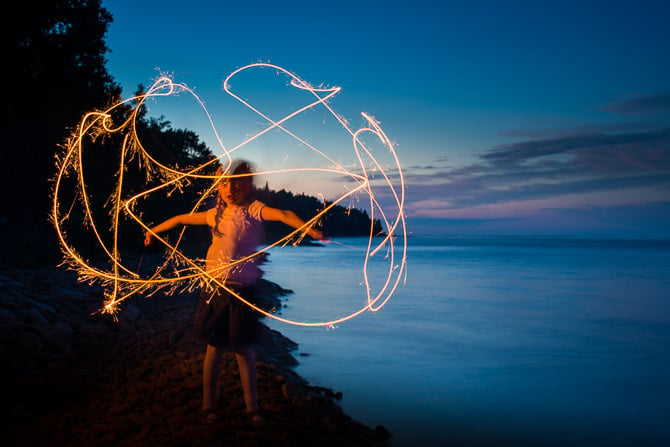 Once again, to keep the background exposure approximately the same, with a shutter speed of 3 seconds, I changed the aperture to f/5.6 and increased the power on the flash to 1/4.

Have Fun And Take Lots of Sparkler Photos

The most important tip I can leave you with is to have fun and take a lot of photos.

There is quite a bit of trial and error involved so not every photo will turn out.  You can ask your kids to try not to wave the sparklers in front of their face, but I usually find that its better just to let them have fun and play without too much direction.

You may also notice that the freezing effect of the flash is not the same in every photo.  You will get the most definition from the flash if it catches your subject while they are moving around.  If they stay stationary for most of the exposure, they will look blurrier as they will be mostly lit by the light from the sparklers and not the flash – like this: 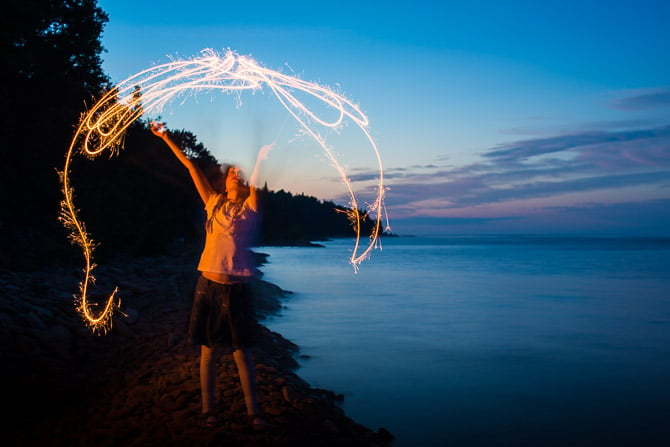 Once you’re done playing around with the sparklers – its time for the main attraction – the fireworks!

Since you’ve already got your camera set up on a tripod, you can follow Our Best Tips for Photographing Fireworks to capture a few photos like this: 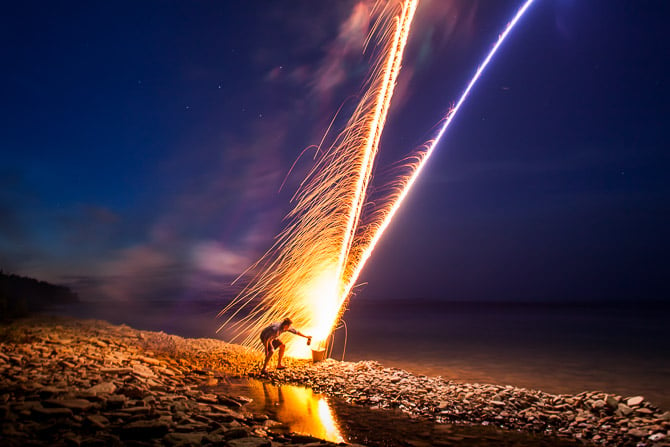 For this photo my camera was set to a 2.0 second shutter speed, f/2.8 and ISO 800.  The reason I went up to ISO800 is because even though the night was getting progressively darker, I still wanted to capture some of the ambient light in the sky and background.

Any Questions or Comments?

If you have any questions about this technique for photographing Independence Day sparkler photos – please leave a comment below.

(By the way, all the images in this post were actually photographed on Canada Day – its pretty much the same sort of celebration, just a few days earlier).

« A Photoshoot at a Shipwreck: Part Two of Von Wong’s Epic Underwater Project
Photographer Goes Through Paralysis, His Mental Healing Was Photography »