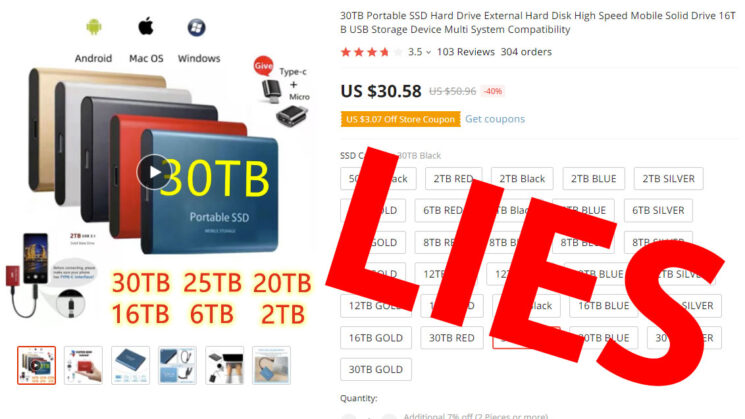 It’s probably not that much of a surprise to most of us who actually use large storage drives but there seems to be a big trend lately, a whole flurry of drives popping up on sites like AliExpress and even Walmart claiming some pretty insane capacities at an even more insane price. We’ve seen this before with microSD cards from generic brands that claim to be 1TB when they’re not even close, but I haven’t seen it quite this blatant before.

The 1TB microSD card scam is kind of believable because 1TB microSD cards do actually exist and we’ve reviewed samples from SanDisk and Silicon Power here on DIYP. But a 30TB portable SSD? This capacity doesn’t even exist from the big brands yet. How about 60TB? Yeah, I’ve seen those for sale, too. And if the capacity alone wasn’t enough to stick a honking big red flag right in front of your face, what if I told you some of those “60TB” ones were less than $15? 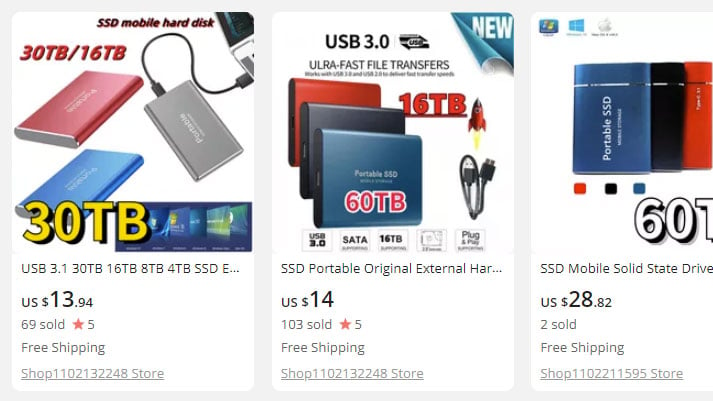 None of these are what they claim to be. But don’t take my word for it, take the word of cybersecurity researcher Ray Redacted, who bought one in order to see exactly what was inside it and what capacity it really was.

Have you ever heard the expression “if it sounds too good to be true, it probably is”? Well AliExpress is currently advertising a 30 Terabyte SSD for $29. And I just had one delivered. Let’s open it up, shall we? /1 pic.twitter.com/cVXtr42LW5

His journey begins with simply ordering the drive. And when it arrived, a label on the outside of the box did indeed claim 30TB. It also claimed to be an M.2 SSD with USB 3.1 connectivity. Inside the box was a portable enclosure with a Type-C socket along with a Type-A to Type-C cable and two adapters that appear to be for OTG use with smartphones.

It comes with a USB-C to USB-A cable, and two adapters : one is C to A, and the either is micro to A. /3 pic.twitter.com/0hC6Apii2n

Before connecting it to his computer, he set about trying to see what was inside the enclosure. There were no screws or obvious way to open it, but he eventually managed to pull it open using a razor blade and slide it out.

Ok that damn hole is tiny. A paper clip was too big. A SIM tool was too big. A single staple goes right in, but there isn’t anything behind it like a reset button or a release. pic.twitter.com/BD7J5LdeHl

What he saw inside is definitely not M.2, but what appears to be a dual microSD card reader with a couple of microSD cards literally hot-glued into place.

When provided with power, the LED light came on…

When the USB-C port is given 5V power, the LED lights up blue! pic.twitter.com/uYBEXzl8JD

Plugging it into the computer did indeed reveal a pair of 15TB drives. Or at least, that’s what it told the operating system it contained. His son noticed that the device only appeared to work with USB 2.0, meaning that the USB 3.1 claim was also nonsense (if we didn’t know this already).

My son just pointed out something interesting: It appears to only work over USB 2.0, using the cable they shipped with the device. That means it will only run at 480 Megabits per second, or 60 Megabytes per second. In order to test even 1 15 TERABYTE drive for capacity…

A fellow Twitter user pointed out that US retailer Walmart had apparently fallen for this scam, too, and was actively selling these drives on their website. The listing since appears to have been taken down.

Let’s go ahead and submit for the full refund, and let’s show AliExpress this thread as well as sharing a video with the seller. pic.twitter.com/hZPk7wqoIe

So how are these drives not 30TB when they claim to be 30TB? Well, it’s pretty much the same as the old 1TB microSD card scam, as Ray explains…

But when you go to WRITE a big file, hacked firmware simply writes all new data on top of old data, while keeping directory (with false info) intact.

H2Testw actually WRITES & then RE-READS its data. But the scammer slowed the bus down from 5 gigabits per second to .48 gigabits

… And the plot FURTHER thickens. Checkout what @SmithyVaankrach just sent me: https://t.co/EiArhbJil0

In short, it’s nothing more than a couple of very low capacity (in the MBs, not even GBs) microSD cards using a cheap USB 2.0 hub chip that’s been programmed to misreport the capacity of those microSD cards back to the computer. But as Ray notes, it does it in a very clever way, as if you attempt to write something to the device that’s larger than the size of the card you’re writing to, it simply overwrites the data it’s already written, making it look like the file has transferred completely. If you try to copy it back, though… Nope, not gonna happen. The data just isn’t there.

If you’re looking for cheap large storage and you’re not sure if a deal is a scam or not, just have a read through Ray’s entire Twitter thread. Lots of people came out to show a number of other devices that similarly scam the customer. As Ray begins his opening post, if it sounds too good to be true, it probably is!

Shooting a Commercial Image With Trash and Walmart Gear

« Do you need an image stabilising lens as well as in-body stabilisation?
Two photographers and over 200,000 photos made this 174-megapixel photo of our Moon »