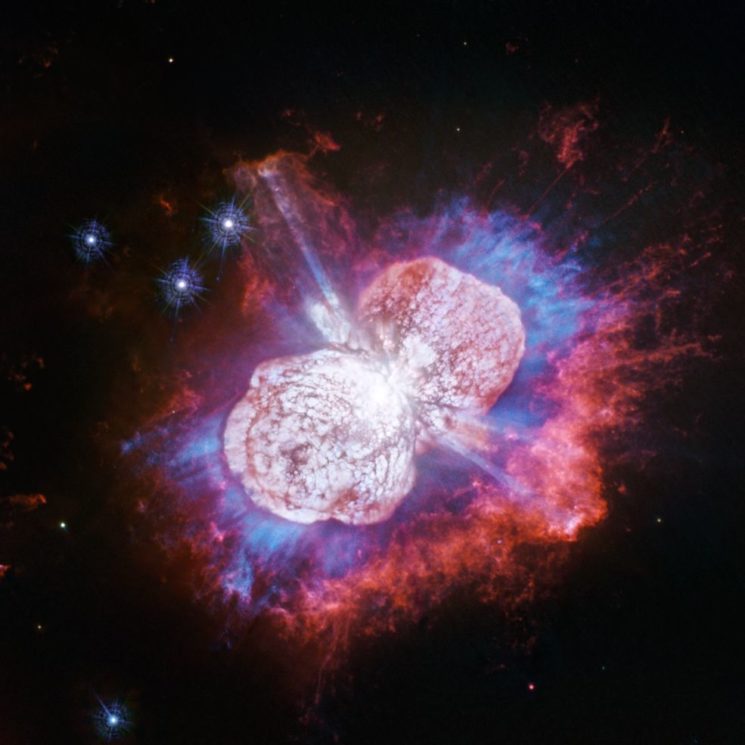 The Independence Day is just around the corner in the US, and it means we’ll get to see (and shoot) lots of epic fireworks. But they can hardly be as epic as the one NASA’s Hubble Space Telescope recently captured. It started exploding 170 years ago and it’s still continuing, and NASA calls it “the galaxy’s biggest ongoing stellar fireworks.”

The image shows a doomed super-massive star, called Eta Carinae, which resides 7,500 light-years away from us. It’s the largest member of a double-star system, NASA explains. This magnificent photo includes ultraviolet light, and it shows the star’s hot, expanding gases glowing in red, white and blue.

According to NASA, the star may have initially weighed more than 150 Suns. Its fireworks started in the 1840s when Eta Carinae went through a titanic outburst called “The Great Eruption.” This made it the second-brightest star visible in the sky for over a decade. As a matter of fact, it was so bright that mariners in the southern seas used it for navigation at the time. The star has been prone to violent outbursts ever since the 1840s. Because of this, telescopes such as Hubble have monitored it for more than two decades.

The image can help scientists to understand how the eruption began. Also, the technique of searching in ultraviolet light for warm gas could be used to study other stars and gaseous nebulas, NASA writes. And while the photo certainly has a scientific value, for us who just enjoy stunning photos of space – this one will surely leave us in awe!

« Has social media turned photography into a competition?
I made my own digital camera using an Arduino, a projector and a photoresistor »